After a 12-year absence, the California State University Bakersfield men's basketball team returns to the on-campus Icardo Center this month for its home opener against Pepperdine. 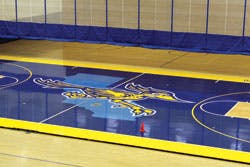 After a 12-year absence, the California State University Bakersfield men's basketball team returns to the on-campus Icardo Center this month for its home opener against Pepperdine. Under contract to play at 9,000-seat Rabobank Arena in downtown Bakersfield between the 1997-98 and 2010-11 seasons, the Roadrunners drew significantly fewer fans than the arena held and will be more at home in the intimate environs of the 4,000-seat Icardo Center.

CSUB's athletic department sought to mark the team's homecoming with a new, distinct-looking surface - much the way the University of Oregon last season christened Matthew Knight Arena with an imaginative court featuring brown and tan evergreen trees protruding toward center court from every boundary.

Enter the NCAA's first all-blue basketball floor, accented with crisp, golden arches for the three-point lines (thanks to a new corporate partnership with McDonald's). Painted a deep, dark blue, the portable court was previously used at an NCAA tournament site and will help forge a new identity for CSUB's men's and women's basketball, volleyball and wrestling teams. It's also drawn a lot of national attention, which is exactly what athletic director Jeff Konya had hoped for.

"We wanted to have something we could affix our brand to, but also something that would be visually striking, and I think we accomplished both," Konya says, noting that the university considered several variations using the Roadrunners' blue-and-gold color scheme. "As the blue court was becoming more viable, and the design was approved by all parties including the NCAA, we wanted to find the right corporate sponsor to go with the court. And that's when the idea of McDonald's - its national brand and the golden arches - just seemed to make sense with what we were trying to do. I think, right now, the marketplace is catering to schools that are doing things a little differently."

Ask Konya about the inevitable comparisons between CSUB's all-blue basketball court and Boise State's famous all-blue football field, though, and he'll bristle a bit. "There are a couple ways to respond to that," he says. "First, I don't think Boise State has a monopoly on the color blue. But in terms of being innovative, thinking progressively and differentiating your product, Boise State was successful. So if we're talking about doing something unique in the marketplace, I welcome that comparison."

This summer, Towson University overhauled the 15-year-old floor for its basketball and volleyball Tigers at the Towson Center by applying watermark tiger stripes to the court. The resurfaced floor has already seen plenty of action and is expected to move into the new Tiger Arena in 2013. "Just like Oregon did last year with their new look, we feel that our new court is a plus for recruiting, because kids like things that are unique and cutting-edge in design," Towson's new men's head basketball coach Pat Skerry said in a university news release.

Northwestern University, meanwhile, let members of Facebook nation help choose the new design of its basketball surface at Welsh-Ryan Arena by unveiling four designs on the social-networking site and asking followers to "like" their favorite. Although an all-purple court was one of the proposed options created by a member of Northwestern's athletic department, a more subdued but still very purple design was ultimately chosen based on reaction from Facebook users and input from the university. (Northwestern's Facebook page garnered more than 1,000 new "likes" during the two-week voting period, according to Nick Brilowski, associate director of athletic communications.)

What makes the new surface stand out is the combination of purple paint for the university, Big 10 and arena logos, with purple stain around the court's perimeter and inside the three-point arc. Necessitated by the frequent removal of paint that resulted from pulling up taped-down volleyball court lines, the stain won't peel but also reveals the court's wood grain, giving those areas of the surface a lighter, more natural look than the painted purple sections. "Once people see it in person, I think they'll think it looks pretty neat," Brilowski says. "It's not a traditional look."

The stain also is expected to help reduce glare - a problem that initially plagued Oregon's floor, thanks to an upper-level ribbon board washing out much of the hardwood artistry. Just to be on the safe side, CSUB's Konya has already tested the Icardo Center's new court to ensure that the blue surface does not emit headache-inducing glare for spectators and home viewers. The surface passed with, well, flying colors.