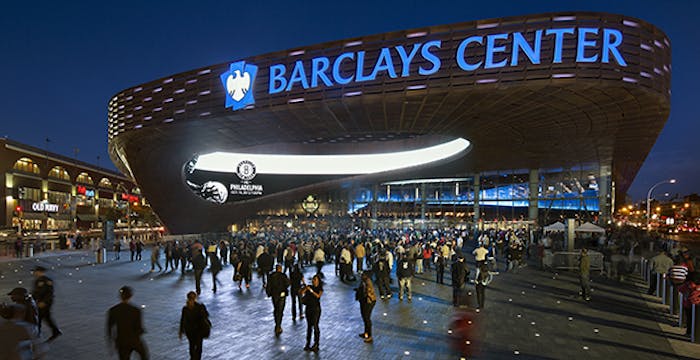 They dreamed of titanium. They got rusted steel. The most fraught sports-architecture design process in recent years ended in late September with the opening of the Barclays Center, the new home of the Brooklyn Nets and the future home (it was announced in late October) of the New York Islanders. 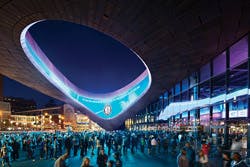 First proposed in 2004 when real estate developer Bruce Ratner purchased the Nets, and designed initially by Frank Gehry (he of the Bilbao Guggenheim Museum's cloak of titanium curves), the would-be arena was dogged by controversies involving Brooklyn's use of eminent domain and its definition of what constituted blight, as well as multiple lawsuits. Worse yet, the first renderings prepared by the second architects were met with outright hostility; one critic called the design "a colossal, spiritless box," "offensive" and a "monstrosity," and the process that led to the design a "betrayal of the public trust."

Yet, the finished product has garnered wholly positive reviews, even considering that the "Rusty Turtle" nickname appears to have stuck. In an era that has seen the size and height of arenas threaten to take them completely out of human scale, Barclays Center fits into the current neighborhood and, one assumes, into its eventual context of large-scale surrounding development. Its signature "oculus," with inward-facing video screens, makes the building instantly recognizable. Inside, the dark aesthetic is seen as very Brooklyn, and the game-day experience within the seating bowl is said to be loud and electric - just what you want in a spectator venue.

If there's a lesson to be learned from the rush to judgment that accompanied the arena's development, it's that design involves the aesthetics of numerous people, even when it's the work of a visionary architect such as Frank Gehry. Looking back, it was inevitable that Gehry's original design would be altered, since a building owner always has a vision that is different from the designer's, as well as budgetary considerations he or she must heed. Trade-offs must always be made, and building owners (and architects) nearly always begin adding and subtracting from the project as they become influenced by visits to other buildings, changes to program or tenants' specific needs. Design is an amalgam of competing needs and desires - and, more so than museums, sports venues must always come back to basketball courts of unalterable dimensions and locker rooms and concessions operations that must be functional before they can be fanciful. 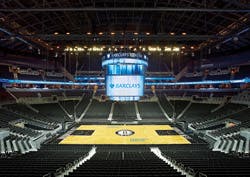 HE DARK BOWL RISES
Although the exterior skin has its critics, it helped point the way to a cohesive color palette indoors, with the black seats becoming a signature element.

Gehry's most fanciful flight on the arena project involved a rooftop park ringed by an open-air running track that doubled as a wintertime ice skating rink. It was scrapped for budgetary reasons - and then the global financial meltdown occurred. Away went Gehry's conception of the arena embedded within a ring of four wavy residential towers resembling falling shards of glass, and away went Gehry and his four years of work on the project. Ratner turned to Hunt Construction Group, his design-builder, desperate for a workable arena alternative that could be designed quickly enough so that Ratner didn't lose his financing, and Hunt in turn brought in Kansas City-based Ellerbe Becket (now AECOM) to do just that. Ellerbe Becket utilized its design of Conseco (now Bankers Life) Fieldhouse in Indianapolis as a template - and then was savaged in the press for its race-against-the-clock efforts. Yet another architect was brought in, New York-based SHoP Architects, to dress up the new design.

"AECOM came in to solve a very tough problem - how do you fit a state-of-the-art arena on a site like this in the middle of a city? - and without their science, it wouldn't have happened," says Chris Sharples, a SHoP principal. "They gave a very good anchor in terms of getting the bones right. And that's what they were charged with doing. They were under real pressure to make sure that, technically, it could work - that they could afford it and build it. Unfortunately, it came out in the press that it needed to have a higher image."

"I know it was a very long and contentious process," says Bill Crockett, director of AECOM's sports architecture practice, of the part that preceded his firm's involvement - but in the end, the design appears to have benefited from the longitudinal "collaboration." Several of the most successful design features sprang from the original requirements of the city planning commission and survived the changes to the design team. For example, Crockett notes that master planning completed by Gehry's office called for truck elevators and a turntable to be used instead of the standard loading docks and ramps, part of the plan's sensitivity to the tight site (the building is partly built on a platform over a rail yard and maintains space for adjacent high-rise commercial structures). In another example, AECOM preserved the notion of visibility into the building by designing an entry lobby with glass on two sides so that the seating bowl and hanging scoreboard within the arena can be glimpsed from the exterior plaza. "There was a real commitment to the placement of local-serving retail around the perimeter that's open at non-event times, and the openness of the main entry, which we thought were great ideas," says Crockett. "There were preexisting principles that we built around."

SHoP Architects found itself working within similar constraints when it came aboard. "The owner made it very clear to us in the first meeting that we could not change any of the program in terms of its form or adjacencies," Sharples says. The firm's work on the design of the building's skin (the now notorious weathered steel panels) led to a more cohesive color palette indoors, too, and although there have been some complaints about the dark interior (featuring dark terrazzo, charcoal gray tile and other similar hues), the black seats within the seating bowl have become another signature element.

"We were creating this black backdrop, so that when you came in and saw the beautiful herringbone court, that would be the thing your eye would go to, and everything else would sort of be in the background," says Sharples. "It's almost like a black box."

The building's most iconic gesture, the oculus, came into being as designers sought further ways to bring the scale in line with the five-story brownstones on one side of the arena. "As multipurpose professional arenas go, it's actually relatively compact, less than 700,000 square feet, and it gets the benefit of the event level being 20 feet below grade," Crockett says. The bands of metal panels, separated by a band of glass on the building's upper concourse, began this process, but then the horizontal lines were made even more explicit by stretching the lower level of panels out to create the canopy over the plaza, which cantilevers 80 feet out from the bulk of the arena.

"By doing that, we were able to give the building an even stronger sense of repose, and then putting the oculus in allowed us to open the canopy up," Sharples says. The use of video screens inside the oculus gives the approach to the arena the requisite air of excitement, especially for the majority of visitors coming up the stairs and escalators from the subterranean rail station. "Because this arena privileges mass transit, the people who really get the effect are the ones coming from that main transit hub; they're looking right through it," Sharples says. "At the same time, the video is captured within that circular space. You don't have this huge blaring thing reaching out into the whole neighborhood."

Ultimately, an arena is used for spectator events, and the people who piled on during the design process are likely to be eating their words. (This conjecture doesn't extend to the many people who objected to, and continue to object to, the political process overseeing the development.) In terms of the spectator experience and the building's context, Barclays Center has largely silenced the critics.

Visitors see the scoreboard from outside, get that first glimpse into the seating bowl and, entering from the ground-level concourse, walk down to their seats within the sunken bowl. "That's always a nicer experience instead of facing a big bank of stairs," says Crockett, who notes also that the rake isn't as steep as its reputation. "It just got more careful attention to the lighting, the angling of the seating, the way we turned the corners. There were lots of pretty subtle moves to create that sense of intimacy, like the way the roof structure has been brought down into the upper bowl, so you have that sense of sitting up in the rafters. The upper level suites are treated like lofts, so that kind of analogy is drawn."

And the exterior? Were the designers hurt by the long list of descriptions of the arena submitted by readers and published by The New York Times?

"There was one person who called it the George Foreman Grill, and one Angry Clam," Sharples says with a laugh. "I actually think Rusty Turtle is endearing. The nickname means that people are beginning to make it theirs; they've started to identify with it. We see it as a positive thing."

This story originally appeared in the April 2013 issue of Athletic Business with the headline, "Nets' Gain."