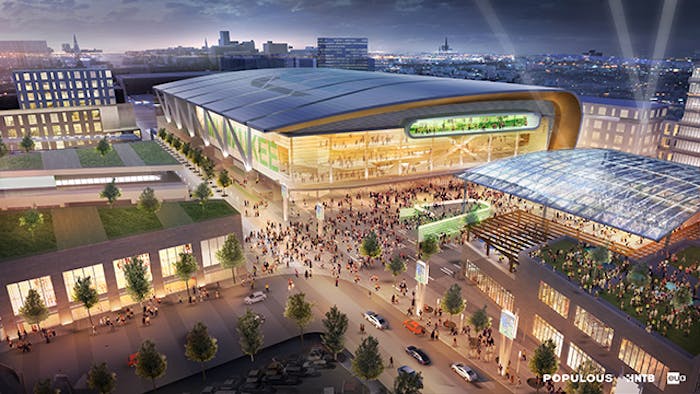 (All renderings courtesy of the Milwaukee Bucks)

The Milwaukee Bucks and their design team released new renderings detailing what the layout will look like for the new multi-purpose arena and entertainment district they plan to build in downtown Milwaukee. The proposed site sits between Fourth Street and Sixth Street from State Street to McKinley Avenue.

According to the franchise, the new arena will be designed to ensure maximum flexibility and year-round use. In addition to the arena, an entertainment district will be constructed and is meant to draw people from all over the region. Space for sports, entertainment, residential, and offices will be included in the new design.

“We’re not just trying to build a new home for the Milwaukee Bucks, but create a 365-day attraction for Wisconsin residents that will help revitalize downtown Milwaukee,” said Bucks president Peter Feigin.

The Bucks recently announced the hiring of Populous to lead a group of architects including HNTB and Eppstein Uhen on the project. 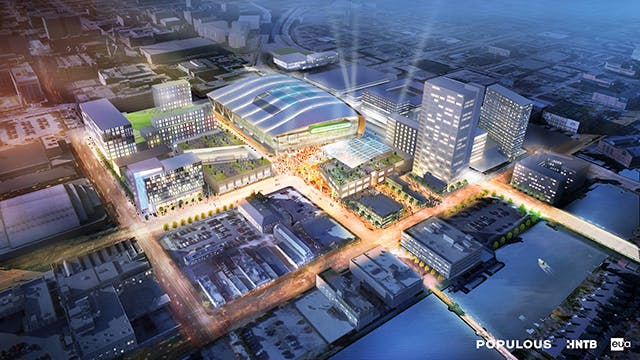 According to the team’s website, “The arena design evokes Wisconsin’s natural beauty and Milwaukee’s rich heritage of industry and craftsmen, with expressive structure, transparency and fluid forms inspired by the rivers, lakes and forests of the region.”

While that seems a bit hyperbolic, we’ll admit we’re intrigued by the roof design.

The new arena would replace the current home of the Bucks, the BMO Harris Bradley Center, which opened in 1988. As this article explains, the BMO Harris Bradley Center is considered outdated by NBA standards. According to the Milwaukee Journal Sentinel, rust is working its way through doors, mechanical systems are aging, the seats are wearing and the roof is leaking. The NBA has told the Bucks and civic leaders that the arena does not meet its standards for a modern facility.

In related news, Marc Marotta, a college basketball star at Marquette University and a prominent player in Milwaukee’s push for a new arena, died yesterday.

Marotta, chairman of the BMO Harris Bradley Center board, died after suffering a brain aneurysm in the parking lot of his health club, at the age 52. According the Milwaukee Journal Sentinel, Marotta was playing a key role in the ongoing effort to build a new arena for the Milwaukee Bucks — and the ancillary development they hoped would come with it.

"The entire Bucks family is shocked and saddened to learn of Marc Marotta's passing," the team said in a statement at halftime of Wednesday night's game. "Marc was a fantastic friend and ally to the Bucks, but an even better person with a generous heart and an amazing spirit. His impact was felt throughout the Milwaukee community and he will be dearly missed."