On November 30, 2016, temperatures in Philadelphia hit 61 degrees. The 76ers were set to take on the Sacramento Kings at the Wells Fargo Center, but the game had to be postponed, as the hardwood floor, which had been placed on a deck over the arena's hockey ice, was wet.

Fast forward to March 6, 2017. A Minnesota Timberwolves game at the Target Center in Minneapolis had to be cancelled due to condensation on the court. That was also on a 60-degree day, and the floor had been placed over the rink that had just hosted Disney on Ice.

Now consider a similar situation that transpired just this past February at Dunkin' Donuts Center, home of the Providence College men's basketball team. Referees didn't call the game when Seton Hall's leading scorer, Desi Rodriguez, slipped on condensation and hurt his ankle in the first half, but the game was eventually suspended after two more players went down in the second half. Unseasonably warm temperatures in the 60s and the massive sheet of ice lurking beneath the playing surface — "the Dunk" is also home to the Providence Bruins — combined to create a layer of condensation at two points on the court. It was the second case of condensation affecting a Providence home game in 12 months.

Notice a pattern? Regardless of what's causing such mild temperatures in otherwise cool seasons and locales, the fact remains that facility operators must recognize the potential impact of exterior conditions on their in-arena operations. 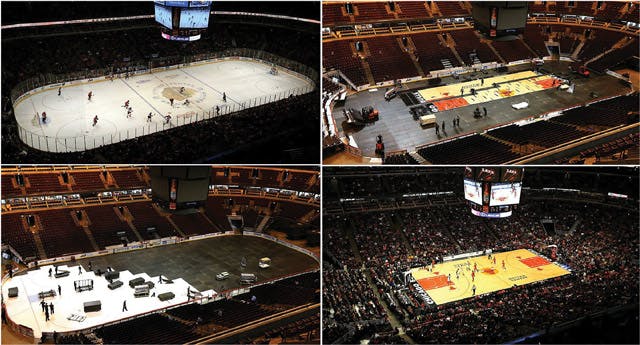 Why is the floor wet?
Now commonplace, multipurpose arenas make sense for a variety of reasons, but challenges can arise once a porous slab of maple, which is naturally sensitive to temperature and humidity, is placed over ice. Add to that an unexpected February day in the mid-60s, the stands packed with 10,000 or more warm-bodied fans, and you have the perfect recipe for condensation on the court, if not a sprained ankle or two.

So, what's actually happening when condensation forms on a wood floor? Arena owners are tasked with trying to keep environmental conditions — temperature and relative humidity (RH) — balanced so that the surface of the floor doesn't hit the dew point.

"This is all about keeping the environmental conditions away from the dew point temperature," explains John Puening, manager of product research and development at Robbins Sports Surfaces.

Moisture mitigation
Target Center management knew what warmer temperatures portended and kept an eye on the court as the Timberwolves held their shoot-around on game-day morning. Building doors that morning had been open as crews transformed the arena from Disney on Ice to NBA basketball mode, flooding the space with warm air. Once installed, employees mopped the court throughout pregame warmups, while also running dehumidifiers and trying to cool the arena to as low a temperature as possible.

Efforts at the Dunkin' Donuts Center were similar, and management actually thought it had solved the problem by synchronizing their HVAC and ice chiller systems, while also cooling the arena for two days prior to the game between Providence and Seton Hall. But alas, condensation still formed on the surface of the floor.

Bob Curry, owner of Covermaster, says in most cases, today's arenas are equipped with "super-duper" dehumidifiers that do an excellent job of controlling the environment in the space. He adds that in some cases, large electric fans are positioned at surface level to keep the air moving. The Dunk has no dehumidification, much less the super-duper variety.

Environmental controls aside, rink conversion systems represent the first line of defense between the ice and the wood floor. In Puening's example of the glass of iced tea, the conversion system is the variable — the insulated cup.

Both Robbins and Covermaster offer a number of conversion system options, ranging from interlocking wood and reinforced fiberglass tiles to thick polyethylene systems with foam centers. Conversion systems,installed as modular panels across the ice, are graded on the same R-factor as home insulation.

Curry says that a conversion system's R-factor — the measure of a material's resistance to conducting heat — can hold energy-saving benefits, as well. "You can turn your ice chilling system down, because now that you have your insulator, you don't need it as cold as when you're playing hockey," he says.

Curry also notes that conversion systems are often stored outdoors due to lack of space, which isn't ideal. "When they bring those panels inside, they're actually bringing the moisture in with them," he says. "If you store them inside the building that's not necessarily an issue."

In the end, Puening contends that while controlling the arena environment is a big part of combatting condensation on warm days in multipurpose arenas, increasing the insulation between the ice and the floor should be a top priority for arena owners.

Warmer reality
We might be able to pass off unseasonable weather in Minneapolis, Philadelphia and Rhode Island as anomalies. However, a 35-degree day at the North Pole in February, as was recently reported by the U.S. Global Forecast System, is not as easily dismissed.

The news is rife with stories about flooded gymnasiums, hurricane-blasted football stadiums, and increasing problems brought on by warm days during times of the year when it shouldn't actually be warm. If these are the new realities of our climate, they're also things to consider when designing and planning for the daily operation and maintenance of any facility — indoors or out.

This article originally appeared in the April 2018 issue of Athletic Business with the title "The Surface Is Unplayable: Addressing court condensation in multipurpose arenas." Athletic Business is a free magazine for professionals in the athletic, fitness and recreation industry. Click here to subscribe.