A 62,000-square-foot indoor tennis complex is under construction at the University of Nebraska at Kearney. The $8.8 million facility will be a partnership between UNK and the city of Kearney, and will benefit the Lopers and other local tennis players. 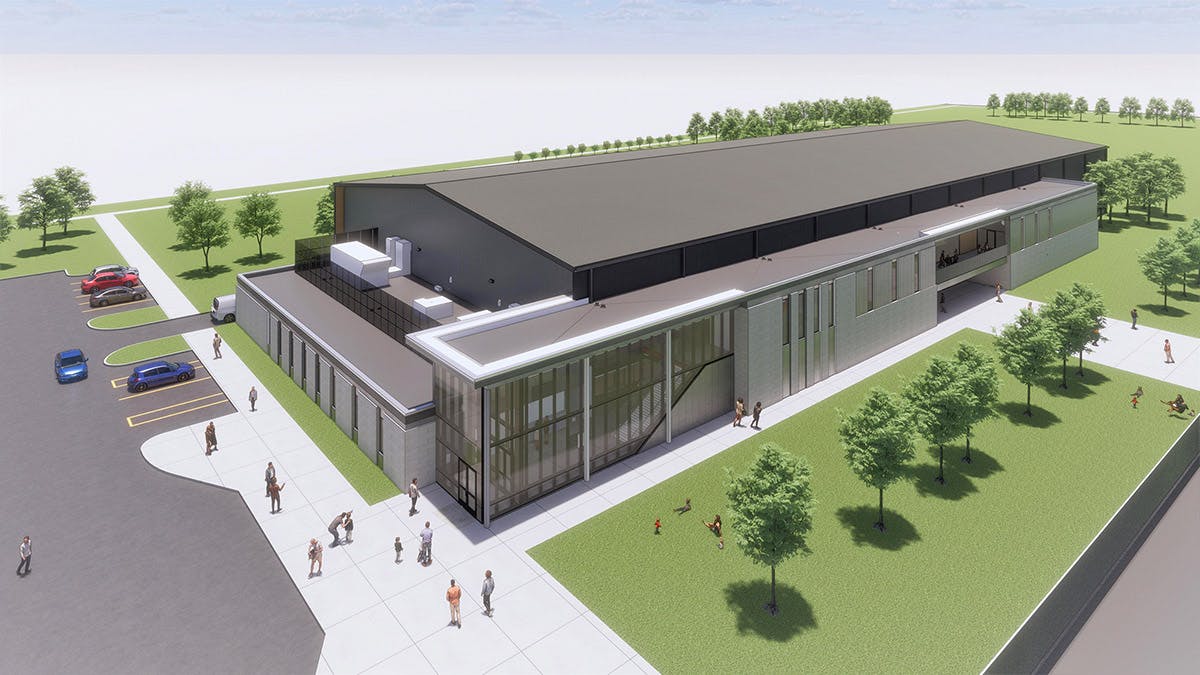 Courtesy University of Nebraska at Kearney

It will be owned and operated by the city — with UNK providing operational and maintenance support — creating additional opportunities for tennis players of all ages.

The tennis complex will serve the UNK women’s team, as well as the Kearney Tennis Association and Kearney Park and Recreation. At least 75% of the court time will be set aside for open community play.

Currently, there are four indoor tennis courts at the Buffalo County Fairgrounds. However, those courts, owned by the county, are starting to show their age. They’re also unavailable when the space is rented out for other events.

With year-round access at the new facility, which will be air-conditioned and heated, the public can expect more availability.

In addition to open play, the city-owned complex will host lessons, leagues and tournaments. Drop-down curtains allow the space to be divided into thirds, providing additional flexibility.

Numerous benefits for the UNK tennis program include improved access to practice space during cold or inclement weather and the ability to host more home competitions, particularly in February and March.

Though an opening date has not been set, the indoor tennis complex is expected to be substantially complete in February 2022. It will be named the Ernest Grundy Tennis Center in honor of the longtime Kearney State College English professor who developed youth tennis programs, contributed to the formation of the Kearney Tennis Association and organized local tournaments and intercity matches.

The project is primarily funded through private contributions and a $1.125 million grant awarded to the city by the state’s Civic and Community Center Financing Fund. – UNK News

A $5.5 million field house construction project is underway in the Birmingham City School District in Alabama. Officials broke ground on Wednesday for a new football stadium at Woodlawn High School. The construction will also mean Woodlawn will get its first true field house.

Teams currently have to travel to Lawson Field for home games, making each game feel like a road game.

Architects said construction will start this fall and the stadium is expected to open in time for the 2022 football season. The stadium, which will be built on the site of the northeast Birmingham school’s current practice field, will accommodate 2,800 fans and will include a synthetic turf field. Construction will also include stadium lighting and sound system.

There is a lot of dirt being moved around on the New Mexico State campus.

Several facility projects are underway and expected to be completed by the fall. Through capital outlay funds, donor gifts and athletics budget spending, there are $3 million in projects underway for men’s and women’s basketball, volleyball, women’s soccer, track and field and baseball facilities.

New Mexico State received $1.6 million from the state in capital outlay funding in Fiscal Year 2020 for athletics. Those funds have been used for upgrades in the Pan American Center and the NM State Soccer Complex.

The athletic department is using $1 million for a new video board in the Pan American Center. The current video board was installed in the spring of 2006 prior to the Western Athletic Conference basketball tournament, far exceeding its 10-year expected lifespan. NMSU is working with Daktronics and plans to have the video board installed in time for volleyball season.

Between the video board and the already-installed floor design, which cost $25,000 from the athletics department facilities budget, there were over $1 million in upgrades in the Pan Am.

The women’s soccer team will be able to play games at night with the installation of stadium lights at the Soccer Complex. The school received $570,000 from the FY 20 capital outlay for the project.

The athletics department received $500,000 from capital outlay funds in FY 19, which was used to resurface the current track in hopes of hosting track and field meets for the first time since the spring of 2005. The current track was poured in the early 1990s.

After a $900,000 gift from longtime donors Mike and Judy Johnson in the summer of 2019, the Aggies’ 4,500-square-foot hitting facility is nearing completion next to Presley Askew Field.

It was the latest gift to the baseball program, which included a $1.4 million donation for Presley Askew Field renovations in 2013. – Albuquerque Journal