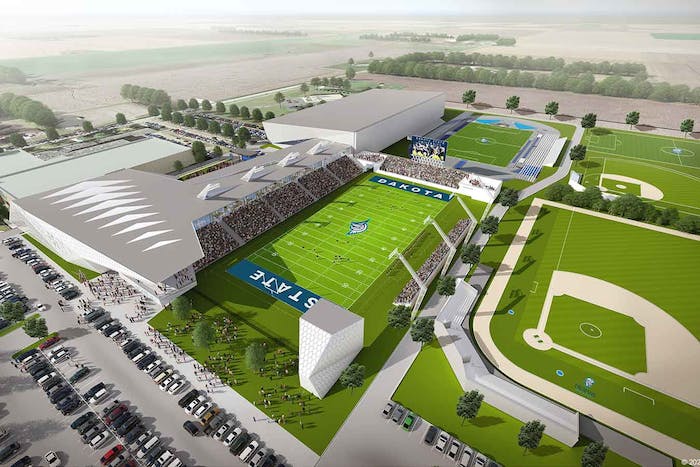 At an event in late February, the university shared a virtual walkthrough of the facility, including renderings of spaces and aerial views.

DSU officials said $45 million has been raised for the facilities, with $30 million raised in the last eight months. The first phase of the athletic facilities required more than $35 million to move forward.

Additional priorities to be addressed include an arena for basketball and volleyball, an indoor track and training facility, an outdoor plaza, and baseball and softball fields.

Dakota State is building champions with $45 million raised for the new athletics facilities. This will be transformative for DSU and the Madison community.

“The development of the complex will enable DSU to compete consistently for conference titles and national championships,” the university said in the release.

The field house was built in 1957, the football stadium has a grass surface instead of artificial turf and there is not an indoor practice facility, even though teams must train indoors more about half the year, DSJ athletics director Jeff Dittman said. New facilities will allow the department to add additional sports.

The university said fundraising is continuing with a final goal for the project at $100 million “to complete all priorities.”