Watch: Get Inside the Longhorns' Moody Center | Athletic Business

Watch: Get Inside the Longhorns' Moody Center

The Moody Center is Austin’s new 15,000-plu- seat multipurpose arena on the University of Texas campus.

The $375 million state-of-the-art, privately-funded arena is now open. Get a look inside:

>Designed specifically for concerts, the new arena will replace the 45-year-old Frank C. Erwin Jr. Center at the University of Texas and will be the home to the Longhorns women's and men's basketball games, as well as other sports and community events. The center will also host university, high school and other events for the Austin community.

The venue's official grand opening is slated for April 29-30.

The Moody Center announced in January that it had already surpassed over $15 million in ticket sales for concerts and live events three months ahead of the facility's opening. 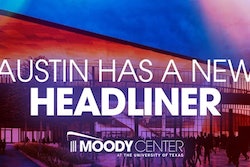 Most sports organizations crack down on fans who attempt to carry alcohol into their venues, but Qatar has warned those planning to attend the World Cup to keep alcohol out of the entire country.
September 8, 2022

Inflation: How Much Will NFL Fans Pay for a Beer?

Yahoo Finance's Josh Schafer discusses how the price of beer and other concessions at NFL stadiums is rising amid widespread inflation.
September 8, 2022
Page 1 of 162
Next Page
AB Show 2022 in Orlando
AB Show is a solution-focused event for athletics, fitness, recreation and military professionals.
Learn More
Buyer's Guide
Information on more than 3,000 companies, sorted by category. Listings are updated daily.
Learn More