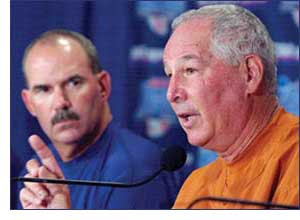 Photo of University of Texas baseball coach Augie GarridoThe 2004 College World Series didn't end the way the University of Texas had planned. In the best-of-three final, Cal State Fullerton swept the top-seeded Longhorns, who then disappeared during the trophy ceremony. By one account, it had been 17 years since a runner-up had up and run before receiving its award.

National media outlets immediately interpreted the Texas sidestep as a snub -- the act of sore losers. In a written statement released two days after the championship game, UT head coach Augie Garrido -- who had coached Fullerton to three NCAA titles and Texas to one -- responded by insisting that he understood the ceremony to be optional, and that poor sportsmanship had nothing to do with the Longhorns' absence."I deeply regret what has happened,"

Garrido's statement read. "Throughout my career, I have placed high values on my role as a teacher. It is important to convey the values, ethics, sportsmanship and purpose in which I believe. That said, I would like to apologize to every member of the University of Texas family, and the fans of the College World Series and Cal State Fullerton for the unfortunate perception that has been created."

Though quickly released and seemingly contrite, the statement still left Garrido unsatisfied that the issue had been put to rest. So, almost two weeks after his players prematurely left the Rosenblatt Stadium field, Garrido returned to Omaha, Neb., at his own expense to call a press conference and apologize in person, because, as he said at the time, "It's the right thing to do."

As unseeded Texas scratched its way to the school's sixth CWS title in June, last season's incident was largely ignored by the media. The Longhorns' 2004 collapse may have earned passing mention, but not their coach's lapse in judgment.Media coverage of collegiate sports is at an all-time high, with countless scribes and multiple cable and satellite sports networks (including the two-year-old College Sports TV) poised to analyze a program's every move.

Add to the mix fan web sites designed solely to dissect the doings of any given athletic department, and the glut of information -- and misinformation -- grows exponentially."The Internet has changed the way sports is covered and operated," says Kathleen Hessert, president of Sports Media Challenge, a Charlotte, N.C.-based consultancy that has advised athletes and administrators at all levels of competition since 1988. "There have been multiple stories just in the past year that have broken in the national media as a result of something appearing in a chat room or on a discussion board -- good and bad, true or false."

According to Hessert -- a former television anchor, reporter and talk show host -- many of today's reporters are mandated to keep tabs on the Internet scuttlebutt in the hopes of unearthing the seed of a story. So, too, must collegiate athletics administrators, in the event a response is in order. "It's essentially brand intelligence," Hessert says. "It's important to know what people are saying about your brand so that you can either enhance it or correct it."

Sports Media Challenge has identified some 2,500 sports blogs -- in addition to mainstream sites such as espn.com -- from which specific information can be filtered for a given school's athletic department using the company's proprietary Internet search engine, eMonitor. "For one football program that we worked with last year, we monitored 47 different sites on an ongoing basis," Hessert says.

With that kind of attention comes opportunity for athletics administrators, coaches and athletes to reinforce their image, mitigate damage or even create more controversy. Knowing "the right thing to do" when dealing with the media has never been more critical.In May, University of Oklahoma head baseball coach Larry Cochell resigned two days after reports surfaced that he had used a racial slur when referring to one of his players during separate off-camera conversations with two ESPN broadcasters.

The lesson? "If you are anywhere within range of journalists, where they can see or hear whatever you're doing, you have to expect that it could end up in a story and that you have to be accountable for it," Hessert says.

Moreover, the phrase "off the record" provides interviewees no safety net, either. "There is no such thing as `off the record,' " Hessert says. "In fact, there are multiple definitions of what `off the record' means. To some journalists, it means they can't use your name but they can still use the information." The written statement, meanwhile, affords the source the opportunity to craft a message largely immune to follow-up questioning. "

In the best of circumstances, it is a truly collaborative effort," Hessert says. "It never should be that a sports information director or the university-relations department writes the whole thing. If you're the one whose reputation is on the line, you're going to need to participate in the development of the message, as well as its delivery. You can't have the same degree of passion regarding the message if somebody hands it to you. It's just not the same."

While not every situation calls for a response (much less one as thorough as Garrido's), failing to respond to a situation that does -- and promptly -- can result in public-relations disaster. "In crisis, I have a saying, `Go for the quick hemorrhage, not the slow bleed.' " Hessert says. "People make mistakes. And when we hear, `I'm sorry,' especially in a timely and genuine manner, we're more apt to forgive. Everybody's human."

But it shouldn't take a crisis for athletic department personnel to appreciate the importance of media relations. From called press conferences to post-game interviews and regular TV and radio appearances, most athletics officials and coaches will eventually have to step up to the mike. "Most are proactive in terms of wanting to do it right from the outset," says Hessert, who estimates that only 30 percent of her work focuses on crisis management.

Preparation is key to any successful media contact. Hessert recommends having an agenda for each press conference, with the goal of influencing its direction and outcome. "You'll go in as an equal with the media and feel like you're actively contributing to the end product," she says. "It's like going into a game and having a game plan versus just responding to whatever is thrown at you."

While the mere act of calling a press conference suggests an agenda, Hessert warns, "That doesn't mean that you can articulate it in a single, well-thought-out sentence." By focusing on one main point instead of five (and trusting journalists to determine which among them is most important), athletics officials can better control what will ultimately make it on the air or into print.

Finally, Hessert stresses the importance of being quotable. "If you're going to do an interview, your goal should be to be quoted," she says. "If you're not quoted, you haven't done your job as an interviewee well enough. You haven't been succinct, interesting or relevant enough to contribute something significant to the story."

That said, not all media contact requires equal preparation. There are the high-profile press conferences -- introducing a new head football coach or announcing the revelation of NCAA rules violations, for example. There are important but less-critical interviews setting the tone for an entire season, say, at a conference media day. And there are updates of information that might come after daily practices. "

You don't put the same kind of preparation into every interview, and you shouldn't," Hessert says. "You have to look at the return on your investment."

Media savvy individuals recognize the value of their interview investments, according to Hessert. "Today, major athletic programs, coaches and athletes are brands in and of themselves," she says. "They understand their reputation is immeasurable in terms of value, and therefore they've got to cultivate and protect it."