Q&A with Chuck Yesalis, Penn State professor of health and human development, about steroid use in sports. 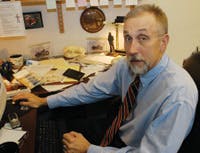 Chuck Yesalis has faced more questions about steroid use than Barry Bonds, Rafael Palmeiro and Jose Canseco combined. By his own estimation, the Penn State University professor of health and human development conducts more than 200 media interviews each year on the subject. The requests were coming at a rapid pace just prior to the release of Game of Shadows, the book that purports to document Bonds' serial steroid use during his pursuit of Major League Baseball's most coveted home run records. During one such interview, Paul Steinbach asked the 59-year-old Yesalis, a former strength coach, if he himself has ever juiced. "No," he says. "These are dangerous drugs."

Q: How did the discussion of steroids become such a prominent part of your day-to-day life? A: I've worked in this area for 30 years now, mainly because of my concern for kids. Plus, guys who are breaking or who have broken records, in my opinion, couldn't do it if they weren't using drugs. I find that offensive.

Q: Why aren't more fans likewise offended? A: People pay big money to see bigger-than-life players doing bigger-than-life things. That's what sells. One thing that could stop this problem in its tracks is if fans really rebelled - turned off their TV sets, stopped going to the ballpark and made all the money go away from sports. But since we don't believe in the Tooth Fairy, the Easter Bunny or Santa, we can write that one off.

Q: Do you suspect that Penn State athletes are using steroids? A: Look, there is no college - in Division I, II or III - that can honestly tell you that it doesn't have a problem. These drugs work too well, there's a lot of money at stake and there are huge loopholes in the testing systems.

Q: Is one testing policy better than the others? A: I laughed two years ago at Sen. McCain's hearing - I was sitting right behind Paul Tagliabue and Bud Selig - when people kept using the NFL as the gold standard. I said then that I don't think there are any more people in baseball using steroids, as a percent of the total, than there are in the NFL. The Olympic testing system is far more aggressive, but can somebody really look me in the eye and tell me the Olympics are clean?

Q: What will it take to clean up sports for good? A: Get all the major sports organizations - professional and so-called amateur - to pony up $100 million and give that money over a five-year period to the top chemists around the world to close all these loopholes in drug testing and develop tests for genetic doping. That would be a start. I've concluded by the lack of money being put toward this problem that there is a lack of true sincerity in really cleaning it up. Another idea is to aggressively pursue this problem with high levels of law enforcement - DEA, FBI, state police, IRS - doing undercover sting operations at the college, pro and Olympic levels. That could have an impact, but I don't think we - or other countries that put sports up on a pedestal - have the stomach to do it.