While community-relations programs primarily benefit teams and leagues, a focus on community building can achieve even broader goals. 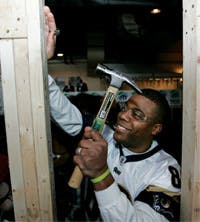 Most sports teams could not hope to raise that kind of money. Their athletes, coaches and staff can offer time and talent, but community building often requires additional resources. This is where team sponsors may lend a hand. Teams and sponsors should expand their relationships to include joint community-building projects. Recent studies on cause-related marketing demonstrate that consumers expect corporations to do more than make profits for shareholders, and they also expect sports teams to do more than sell corporate signage. One recent MediaLab survey of 13,200 people in 20 countries found that 50 percent believed sports properties and TV programs were far too heavily sponsored, but only 25 percent believed the same about "causes." This suggests that while traditional marketing outlets have become increasingly cluttered, there is an opportunity for sports organizations and corporate sponsors to develop triangular partnerships with local causes, to everyone's advantage. Examples might include a sports organization partnering with a home supplies dealer to assist Habitat for Humanity, or an office supplies firm providing materials that help teams working in school programs. For college athletics programs, this especially means developing links between marketing/sponsorship administrators and the NCAA CHAMPS/Life Skills coordinator on campus or the student-athlete advisory committee. It's all about finding and nurturing logical linkages. One of the best-run corporate linkage programs belongs to Boston's Jimmy Fund, which raises awareness and money for cancer research. As seen on its web site, the Jimmy Fund offers an extended menu of opportunities for corporate partnerships. Beyond 'Warm and Fuzzy' If a sports organization - team, league or conference - is serious about community building, then its goals, objectives and outcomes should be somehow worked into its vision statement, mission statement and strategic plan. Otherwise, community building will be marginalized. Colleges might consider including community building in the expectations for all coaches, just as professional teams require their athletes to participate in community relations. High school and college programs need to consider making community building a part of every team's activities, even in lieu of practice and conditioning. That may seem utopian, but there is no reason that a well-constructed community project cannot also build team unity (as well as give players a good change of pace). One small pilot program between University of New Hampshire students, local high school athletes and two local causes found that a sacrifice of practice time for community building yielded several positive benefits. (See "No Practice Makes Perfect," left.) Hurricane Katrina reminded us that sports organizations are expected to be true community partners, as well as good neighbors. The resources that sports organizations can devote to these efforts do not always have to be fiscal. Commitments to community building are long-term investments in time, effort and resources. Community-relations programs that focus on community building demonstrate value by creating strong brand associations between the sports organization and its partners. In the short term, this helps achieve marketing goals. The long-term result means that communities are strengthened and transformed - a far cry from the "warm and fuzzy" goals of the traditional community-imaging program.