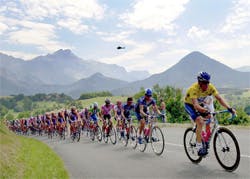 Back in July 1994, when AB first reported on hypoxic chambers - sleeping tubes, tents or rooms that simulate high altitudes, allowing athletes living at low altitude to benefit from the body's stimulated production of red blood cells - there were plenty of skeptics. But over the years, the theory has gained acceptance among world-class athletes and their trainers, who have surely noticed that as many as 95 percent of medals in any given Olympiad have been won by athletes who live or train at high altitude.

The World Anti-Doping Agency has also been taking notice and, in July, its ethics panel shocked the Olympic community with the determination that hypoxic chambers violate "the spirit of sport." The agency said it would decide later this month whether to include altitude tents and rooms on its List of Prohibited Substances and Methods for 2007.

Seventy-six scientists and bioethicists have since signed a letter to WADA that expresses "grave concern" over the proposal, and the concerns are myriad: