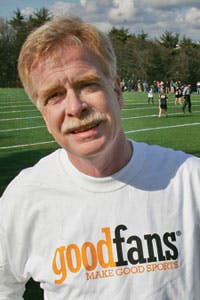 He's seen it at every level of sport - from the so-called "Malice at the Palace" to a football field attack on a friend's 15-year-old son by an opponent's father right in their hometown of Framingham, Mass. - and he's seen enough. Doug Cross wants to put a dent in sports fans' bad behavior. His year-old web site, goodfans.com, chronicles the all-too-regular occurrences of verbal abuse and physical violence that accompany sporting events these days, and in April he authored his first blog entry, "What Kind of Sports Fans Are We?" The site also pitches $14.95 T-shirts that bear the slogan "GoodFans® Make Good Sports" to individuals and entire organizations as a way for people to take a silent, but principled stand against the inappropriate actions of their peers. Paul Steinbach asked Cross to spread the good word.

Q: Bloggers have characterized you as everything from a shameless profit-monger to part of an overreaching "fan police." How do you react? A: I'm not looking to get rich on this. I'm just a sports fan who sees an issue. I'm looking to put a portion of whatever I make back into programs that teach and encourage good fan behavior and sportsmanship, and I've been trying to tap into recreation departments around the country that are grappling with these issues. They're seeing that the core values that make sports fun and rewarding for kids are being compromised, and so they're spending money on programs that teach sportsmanship to parents. There's plenty of need out there for this type of thing.

Q: Are parents the problem? A: A lot of parents now are living vicariously through their kids. The more serious the games become, the more serious the parents become. I've seen many parents who verbally abuse their own kids. That's why my focus is on youth sports at this point. Today's youths are tomorrow's adults, right? If we as adults begin to set good examples for kids, then years from now some of the issues that we see at the pro sports level will go away, too.

Q: How many shirts have you sold? A: About a hundred. To make a statement that shows a little bit about what a person is thinking and really separates him or her from others is a difficult thing for a lot of people. As our reputation grows, and as people begin to see that being a good fan doesn't mean you're a fan policeman, it's going to really take off.

Q: Can a catchphrase on a T-shirt truly curb abuse? A: My hope is that the GoodFans name becomes something that triggers a thought process in people - that if they see a GoodFans T-shirt, it causes them to pause, take a breath and sort of step outside themselves for a minute and think about how their behavior impacts people around them - whether it's the fans next to them, the referees or the players. To me, there is a GoodFan in everybody, and maybe yours is better than mine. All I'm looking for is for everybody who gets involved to just think about how they can be a little bit better.