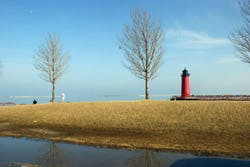 Tom Kroeger has quite the office view. Out one window there's a cityscape, complete with skyscrapers, smokestacks, shipping ports and a wastewater treatment plant. Out another, there's a panoramic view of the fifth largest lake in the world. "The birdlife alone is amazing," says Kroeger. "I've got ducks of all kinds, one after another, showing up at my doorstep right here in the city."

Kroeger is the superintendent of Milwaukee's Lakeshore State Park, which was trumpeted by former Wisconsin Gov. Tommy Thompson in 1998 as Wisconsin's first-ever urban state park. While it was originally conceived as a way for the state to provide year-round access to Lake Michigan, the Wisconsin Department of Natural Resources now hopes to use the park as a means to give state residents a firsthand education about the effects of urbanization throughout Wisconsin's Lake Michigan shore.

"This park is kind of like a little microcosm of all the issues affecting the Great Lakes," says Kroeger. "We're on manmade land; we've got an urban center; we've got a harbor that's listed as an EPA area of concern; we've got issues with drinking water, problems with invasive species. I don't think there are other parks out there where all of these elements that are affecting life on the Great Lakes are so apparent from one spot."

It's that kind of broad vantage point that ideally suits Lakeshore Park as a state project, says Gloria McCutcheon, southeast region director for the Wisconsin DNR, adding that the park also connects multiple state trails of historical significance. "The thinking previously had been that urban parks are really to be provided by cities and counties," says McCutcheon. But from California to New York, that mindset is changing, and urban state parks are showing off natural resources while also forging new bonds between urbanites and their state park systems. 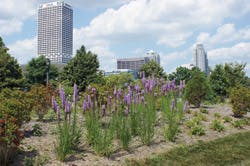 From a functional planning perspective, urban state parks are as diverse as the cities that surround them. Some, such as Detroit's Tri-Centennial State Park, follow a fairly traditional state park track by extolling their state's many and varied natural virtues. The DNR promotes the space as a "green oasis" that showcases "the natural resources collected throughout all of Michigan's state parks," despite it being just steps away from downtown's most iconic skyscraper, the Renaissance Center.

Other urban state parks are more recreation-intensive. The 28-acre Riverbank State Park - one of only 11 parks in the world (and the only one in North America) to be built atop a sewage treatment facility - boasts an Olympic-size pool, a covered multipurpose rink, tennis and basketball courts, and a fitness center from its location 69 feet above the Hudson River in upper Manhattan.

In California, the Los Angeles State Historic Park, located just outside of Chinatown, focuses more on historical education by incorporating creative landscaping throughout its 32 acres. Raised subway tracks demarcate the course of the early 19th-century water system that once supported the region. The parkland also was home to the Pacific Railroad's River Station, as well as the Pacific Hotel, the approximate boundaries of which are now marked by recycled-glass structures.

In downtown Indianapolis, the White River State Park not only ties together walkways, promenades, bridges and open spaces, it serves as a major tourist destination. Attractions include the Indianapolis Zoo, a minor league ballpark, the NCAA Hall of Champions and the Indiana State Museum.

More common, however, are urban state parks that were established for preservation or restoration purposes. Candlestick Point State Recreation Area, which is surrounded by San Francisco's historically underserved Hunter's Point neighborhood, is described by the California State Parks division as "the first California State Park unit developed to bring state park values into the urban setting." Occupying 34 acres - much of which has suffered years of abuse as landfill and dumping grounds - the project involves the restoration of natural wetlands and subsequent habitat diversity that will benefit the Bay Area as well as the entire state. 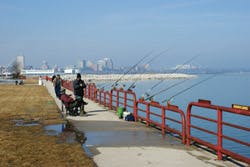 In fact, what each of the aforementioned project types share is the kind of statewide benefit potential that should appeal to state agencies, according to Elizabeth Goldstein, president of the 90,000-member California State Parks Foundation and co-chair of the national City Parks Alliance. "A state parks agency is supposed to be focused on resources of statewide significance," says Goldstein. "You don't want to take state resources and just build a soccer field that's just going to serve a neighborhood. The L.A. State Historic Park is a perfect example. Certainly the park will serve a lot of local constituencies - and they really are the ones who fought to protect that land - but it's also going to tell stories of immigration and water issues, stories of statewide significance."

Park users don't represent the only party served by urban state parks. In California alone, says Goldstein, state parks have benefited from billions of dollars of referendum-related funding over the years. "When you look at the electoral votes, the percentages are extremely high among urban communities," says Goldstein. "To connect the dots here, if those constituencies do not feel a real relationship to state parks or do not get the sense that they are being served by them, then those park systems are going to be in trouble. There's a recognition that these communities are vital in making sure the agencies themselves have adequate services and funding."

Because of their typically high usage rates - a natural result of their proximity to densely populated areas - most urban state parks have a higher profile than their suburban and rural counterparts. Despite that reality, Goldstein says there is a perception issue among park users, who may not always see the forest for the trees by recognizing that their local park has statewide significance. "These parks should be clear gateways to the entire state park system," she says. "The parks have many different audiences and many different purposes. But we've done a whole marketing campaign in California, and the line is, 'Where will the state parks take you today?' The whole point is to make people understand that wherever they are, they are surrounded by a broad system of state parks."