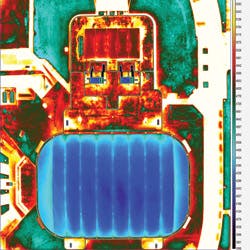 An infrared photo of the Dedmon Athletic Center's roof

When the Lindsay Park Sports Centre in Calgary, Alberta, was first constructed in 1983, it was something of an engineering marvel. Sporting what the project's engineering firm, Geiger Engineers, to this day touts as "the world's first translucent insulated fabric roof," the facility (since expanded and renamed the Talisman Centre) featured three pools, a gymnasium and a running track, among other components. The roof was not in fact insulated, however, and athletes who used the center during its first winter got a lesson in basic meteorology - a humid environment on one side of a Teflon fabric roof and minus-30-degree temperatures on the other side will produce rain. Indoors.

A relatively quick retrofit saw the addition of an interior liner of fiberglass insulation and support membrane, but it "never worked," says engineer John McKay, regional director of the Southern Alberta office of A.D. Williams Engineering Inc., the lead engineer on the Talisman Centre's roof replacement scheduled to begin at the end of this year. McKay and Bill Barden, director of architectural development and longspan structures for tensioned-membrane design-build contractor Birdair Inc., both say that moisture from the natatorium seeped into the insulated layer, which, wet and heavy, slid out of position within the roof cavity and into the roof's lower portions. While three different web sites continue to claim that the insulative value of the Talisman Centre roof is as high as R-22 (the Alberta Association of Architects lists it at a more conservative R-12), McKay tabs it at R-1, and says that the chlorine-laden rain that fell in 1984 has fallen every winter since.

Finally, in 2007, the city of Calgary approved $42.5 million to replace the roof and associated mechanical and electrical systems, and this time they hope to benefit from another engineering marvel - a proprietary system from Birdair called Tensothermâ ¢ that includes a layer of a silica-based aerogel (Cabot Corp.'s NanogelÂ®) insulation. Although the Talisman project will be only Tensotherm's second application (the Dedmon Athletic Center at the University of Radford was the first), McKay calls Nanogel a "proven material," adding, "This is a major step forward. Basically, we're talking about using NASA spacesuit technology in a fabric roof."

There is little confusion surrounding R-values - but maybe there ought to be. Any do-it-yourselfer can tell you after five minutes in the local Home Depot that the higher the number, the thicker the insulation, the greater the energy savings and the higher the price. But there are nuances. For example, while each inch of fiberglass batting thickness adds approximately 3.5 to its R-value, enclosing the insulation in sheetrock or siding adds much smaller R-value. Also, fiberglass insulation is meant to fill a certain-sized cavity in a wall, so using two layers of insulation in a space intended for one layer will not double the R-value.

And, it should be noted, there is some controversy about their applicability in real-world conditions. Manufacturer R-values, for instance, apply only to properly installed insulation, and other components of an exterior wall (windows, studs and air-exchange ducts) will render the R-value meaningless in the same way that cold weather or inadequately inflated tires will render EPA mileage figures meaningless. More than that, external forces can wreak havoc with the entire carefully constructed hierarchy of R-values, from R-2.5 per inch of rigid-paneled fiberglass to R-3.9 per inch of cementitious foam. Insulation that has been subjected to forces such as wind and water doesn't always hold up, and neither does its R-value. As one widely circulated online rant by a manufacturer of solid polyurethane insulation pointed out, a number that could take into account resistance to air penetration, free water and vapor drive (in addition to resistance to heat loss) might tell a different story. 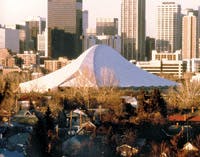 Each design-builder of fabric structures has its own proprietary insulation system and its own take on R-values. For example, Arizon Structures has the Thermaliner, a vinyl-laminated, polyester layer that creates a dead-air space of approximately six to 12 inches within the outer membrane of the fabric envelope; its structures, the company says, can be designed with R-values up to R-30. Yeadon touts the high-efficiency fiberglass insulation in its R-Plus insulated domes - which, when combined with the company's computerized control system, results in an R-value of R-12.

The potential of aerogel, however, is the subject of much anticipation throughout the building-materials industry. Nicknamed "frozen smoke," it is an extremely lightweight, translucent material, most of the volume of which is filled with air, making it an excellent insulator. First produced in lab settings 75 years ago but until recently cost-prohibitive to manufacture in large amounts, it is now being used to produce certain types of diffuse-light windows and skylights, including some made by Kalwall and a number of other polycarbonate manufacturers that claim R-values equal to or higher than those of insulated walls.

Aerogel is credited in several texts as having a per-inch R-value of approximately R-10, while Cabot Corp.'s literature on Nanogel claims a "wide range of thermal performance, from R-2 through R-24." James Satterwhite, global business manager for Cabot Aerogel in the company's construction segment, explains that the range corresponds to the size of the layer used, with a 4-millimeter thickness resulting in a value of R-2 and a 70-millimeter thickness R-24. "It can be tuned to any desirable insulation value up to about R-24 and still be light-transmissive," Satterwhite says. "It's a question of balancing what the needs are for light transmission versus thermal protection."

One thing is certain about aerogel, according to McKay. Sandwiched between two Teflon membranes, "It's going to stay there; it's not going to slide down," he says. "The issue in fabric structures has always been bonding insulation and holding it in place in a Teflon blanket that's subjected to wind and rain and cold."

Cabot's partnership with Birdair is about three and a half years old, and for its extensive investment in the product, Birdair will enjoy what Satterwhite calls a "first-runner status" for several years. But his expectation is that aerogel will become the standard in all types of fabric structures, not just the longspan tensile structures that are Birdair's specialty. "We will be commercializing other fabric applications, to be sure; we're just starting down the pathway on that," says Satterwhite. "The product offers the possibility of bringing fabric into a true envelope product, as opposed to a shelter product. I believe it's a real game changer for fabric structures."