The College World Series prepares for its next chapter 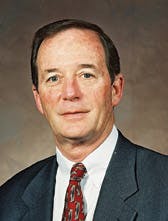 For 60 years, Rosenblatt Stadium in Omaha, Neb., has served as home of the College World Series. As the NCAA's best baseball teams gather again this month to determine a national champion, work continues on a downtown stadium that will, beginning in 2011, replace the beloved "Blatt." As president of College World Series of Omaha Inc., an all-volunteer nonprofit organizing committee founded by his father in 1967, Jack Diesing Jr. has since taking the helm in 1989 seen several five-year contracts with the NCAA renewed, about as many renovations to Rosenblatt completed and his city's identity as host to what he calls "the second-best championship" in all of college sports solidified. In recent years, he's had to address fears among members of a "Save Rosenblatt" movement who feel playing the CWS on any other diamond will somehow cause the tournament to lose its sparkle. Paul Steinbach asked Diesing about the transition.

Q: How hard will it be to see Rosenblatt retired?
A: It was a tough decision, and even though there are still some people locally who aren't sure, I think it's the right decision for the future. We believed that we needed to make a long-term commitment to the NCAA.

Q: Last year, you signed a 25-year deal with the NCAA to keep the CWS in Omaha through 2035. Would that have been possible without a new stadium?
A: We could have gotten a long-term deal - but probably not a 25-year deal - by doing something to Rosenblatt. But at the end of the day, the public money that would have needed to be spent would have been the same, or damn close. We could have something new versus a remodel that wouldn't be exactly what we wanted anyway - for essentially the same price. That sort of turned me around. It became clear to me the decision was about the future and not about the past.

Q: Are you confident any remaining doubters will be converted once they experience the new venue?
A: I learned a long time ago that you can't please everybody, but I would say most fans are going to walk in and say to themselves, "And we were worried about moving to this stadium?" Seats will be a little wider. Rows will have more space in them. Restrooms and concessions areas will be more numerous. Concourses will allow people to walk 360 degrees around the stadium, get their concessions and not miss a beat - which is not the way it is at Rosenblatt now.

Q: What single memory stands out from all the years at Rosenblatt?
A: Two people who have meant a heck of a lot to the success of the College World Series and college baseball in general are my father and Rod Dedeaux, the legendary USC coach who won 11 national championships. They were both at our 50th series here in 1999, and instead of giving a plaque to the Most Outstanding Player, the NCAA agreed to start giving a replica of our "Road To Omaha" statue and named it the John D. Diesing Sr. Award. I'll never forget that. Certainly, there have been a lot of student-athletes who have done great here - a lot of wonderful memories of last-inning heroics and winning underdogs - but to me that gesture says a lot about the infrastructure, the partnership and the reason why we're here. That's special to me.