Rec Departments' Health-Based Initiatives Receive a Shot in the Arm

Partnerships and policy-making give rec departments' health-based initiatives a shot in the arm. 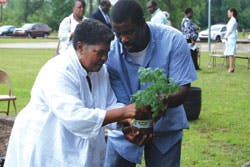 SEEDS OF CHANGEVegetable gardens in Montgomery County, Ala., parks are part of a community-wide health-education effort.

Programs tend to be the darlings of recreation departments. The reason, according to Heidi Melancon, senior manager for strategic health initiatives at the National Recreation and Park Association, is that the benefits of a well-run program are tangible. High participation numbers alone can suggest community involvement; the smiling faces of a young athlete or an exercising adult engender immediate satisfaction within the programmer. That's all good, says Melancon, but it's certainly not all there is.

"You might be getting 30 people in a group exercise program, and that's great," says Melancon, "But all of those people already know they need to be there. They want to be there. What about the rest of the community?"

Answering that, Melancon adds, requires attention to policies, not just programs. "A healthy food vending policy might have to go all the way up to the city level because it's a city contract," she says. "It's a policy that might not be considered on a daily basis, but it can affect everyone, not just people participating in a program."

Melancon is NRPA's representative in the U.S. Centers for Disease Control and Prevention's Healthy Communities Program, known as ACHIEVE (Action Communities for Health, Innovation, and EnVironmental changE). What distinguishes the initiative from other health or recreation grant opportunities is that it's not just providing money for local programming. Instead, it's helping mold local policies - or, as the CDC describes it, "policy, systems and environmental change strategies" designed to promote community-wide health.

Through ACHIEVE, the CDC hopes to accomplish the broader goal of preventing risk factors for conditions such as diabetes, stroke, heart disease, cancer, arthritis and obesity. NRPA is one of four national partners directly involved in funding participating communities (43 communities throughout the United States - 10 through NRPA - were each awarded $35,000 grants in 2009.)

NRPA has an agreement with the CDC to administer 10 grants per year through 2013. (Applications for 2010 grants are due by Dec. 11.) Applying for and even accepting the grant involves each community in a fairly extensive process, from assessment to implementation. Once funding is obtained, two people- including at least one parks and recreation department representative - are identified as "coaches" and receive training at NRPA's headquarters just outside Alexandria, Va. The coaches then help establish a community "CHART" team, which is essentially a local coalition composed of the coaches and any combination of local or state government representatives, health organization representatives or other community leaders.

"The CHART needs to be composed of folks who can actually help make policies come to life," says Melancon, adding that she's seen representation from health departments, YMCAs and other nonprofits, local foundations, planning and transportation departments, school districts, state government, city managers, mayors and city council members. "You need people who can make things stick in the books."

Once the CHART team is in place, it works with NRPA using a comprehensive assessment tool to essentially perform an audit to determine where the parks and rec agency or other community organizations may be either succeeding or lacking in providing health-related services. From there, each community develops a "Community Action Plan." Though each CAP is a unique reflection of a given community's needs, they all involve plans to enact policy and environmental changes that can create sustainable and positive changes long after the ACHIEVE funding has run out.

"I'd prefer $1 million, but I love the fact that this money is just enough to get us organized and get us started on our way," says Jennifer Anderson, a planner with the Central Alabama Regional Planning and Development Commission who represents Montgomery County as an ACHIEVE coach. "This money is a great catalyst for a lot of initiatives."

In rural Montgomery County, for example, the CAP calls for community fruit and vegetable gardens to be installed in already-established neighborhood parks. Produce will be harvested and used to teach children health lessons, as well as sold to provide the initiative with some revenue so it can sustain itself. The county's CAP also incorporates a worksite wellness initiative, which will change policies related to smoking cessation and the marketing of workplace cafeteria food, among other goals.

The heavily populated City of North Miami, Fla., likewise is using its ACHIEVE money to drive worksite wellness policies, but its CAP also calls for improving and redeveloping health-related infrastructure to include a series of paths for walking, jogging and biking. For North Miami Recreation Department facilities supervisor and ACHIEVE coach Ron Bell, developing an action plan to effect change throughout the city has been an enlightening process. "Our focus in the past has been more on programs," says Bell, who shares his coaching duties with Andrea Ramos, a special events coordinator who works closely with the city's mayor and public information office. "Now, we've gotten a good education on how all the different city departments work, and how some of the planning works, on a large scale."

Anderson says working with numerous agencies - including the county rec department, nonprofits, school districts, corporations, and state and local health departments - is not just recommended, but required for the initiative's success. "These partnerships are what can create the sustainability," she says. "There are a lot of people who know that promoting healthy policy is a good idea, but they need us to come in and connect them with other resources. Say you want to change a workplace cafeteria menu to make it healthier. I'm an urban planner by trade. I don't know how to design a cafeteria menu. But what I can do is call my contact down at the Alabama Department of Public Health, they can send out a nutritionist, and we work from there. I'm just connecting those resources."

Ramos has found that when such multidimensional partnerships are in place, funding can beget more funding. "One of our CHART team members is a nonprofit community leader who has been able to acquire another grant because of the partnership," she says. "She is now going to develop a community garden through a cultural arts program. But that garden is being developed in one of our own facilities, a 22-acre park. And it's involving the school system, which is coming out and doing the planning and actual gardening. You're solidifying all these partnerships."

Perhaps no stronger relationships are being forged through the program than those between local parks and health departments. For Melancon, who worked as a public health administrator before joining NRPA five years ago, the relationship seems perfectly natural.

"They're relying on each other more than they have in the past, and that's a great trend we've been seeing over the past five years or so," Melancon says. "There are more alliances as they realize the work they do is complementary. Public health departments can lend their expertise and knowledge related to public health issues like obesity, and you can combine that with the expertise of these parks and recreation agencies, which can reach out to the community, get people involved, access kids. The public health department might come up with a new education piece, but the recreation department might be the perfect implementer of it."