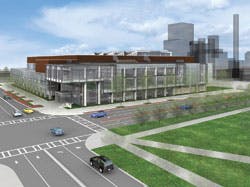 This August, as Hawkeye freshmen are driving through the Iowa City intersection of Burlington and Madison Streets on their way to their first dorm rooms, they're sure to be struck by the sparkling glass facade of the brand new University of Iowa Campus Recreation and Wellness Center.

And Mike Moran, who as director of the city's parks and recreation department is responsible for an existing municipal rec center a mere five blocks away (and yet another across town), predicts UI freshmen won't be the only people in town charmed by the 215,000-square-foot building. "People like to see new facilities," Moran says. "I would, too, just to see what it's all about."

Knowing full well that the new kid on the block tends to draw a lot of attention, Moran and his staff are ramping up their efforts to recruit and maintain patrons at the city's main recreation centers, who will have the option of paying daily or annual fees to access the UI facility once it opens. "We believe in the quality of our programs," Moran says. "We're going to strive for even higher quality, so people will always come back to us, even if they do leave for awhile."

The UI building will feature a 54-foot climbing wall, a comprehensive fitness center, group exercise rooms and multiple swimming pools, including a 50-meter competition pool whose only local counterpart is the 50-meter City Park Pool. "We have pretty similar facilities to what theirs will be," Moran notes, "so, we'll see what happens."

It doesn't hurt that the city and the university have always maintained a cordial and cooperative relationship, even working jointly on softball fields that the university built and the city paid to light, with both entities benefiting from their use. Also softening the blow is the fact that Moran and other city staff members inserted themselves early and often into the planning of the UI facility. "We've had a relationship with the university that has always been good," says Moran. "We've been talking to them on a pretty regular basis lately, too, trying to figure out what their fees will be and what they might be paying staff - and they've been very open."

Moran also takes comfort in the fact that UI is marketing most aggressively toward its obvious target demographic - UI students, a historically fickle group when it comes to paying to use city facilities. "They're going to hit the students hard because those students haven't had a facility like this in a long time," he says. "And that's okay with us."

Moran concedes that a number of Iowa City residents will indeed be willing to permanently switch allegiance and lay down enough cash for an annual pass to UI's newest darling. But he expects most residents to shell out the $5 to $7 daily fee, dip their toes in the water and return to the facilities to which they've grown accustomed - and which, by the way, are free to them, outside of pool use or special programs.