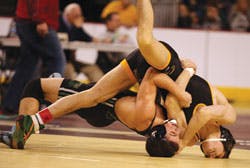 Sparring between the New Jersey State Interscholastic Athletic Association and a state assemblyman over ticket prices cast a shadow over the three-day 2010 high school wrestling championships at Atlantic City's Boardwalk Hall in early March. A new law spearheaded by Democrat and longtime NJSIAA critic John Burzichelli (who claims the association spends excessively on staff salaries and benefits) prevents ticket price increases for tournament events held at school facilities and requires the association to petition the state in order to raise certain postseason prices at nonschool venues. The move now sets a precedent for other states.

"That is something that has to be considered as a potential development in the future," says Robert Kanaby, outgoing executive director of the National Federation of State High School Associations, who also spent 13 years as head of the NJSIAA. He notes that state legislatures have gotten involved in eligibility and other high school sports issues in recent years but until now had stopped short of dictating ticket prices.

The New Jersey law was passed three years ago but did not take effect until this January. It specifically prohibits public schools from joining voluntary organizations such as the NJSIAA if "the association requires increased ticket prices for attendance at playoff games compared to regular-season games" - language that essentially jeopardizes the NJSIAA's very existence. While prices for student and senior citizen tickets to events held at nonschool venues must remain the same as during the regular season, the law allows ticket prices for adults at those venues to increase, but by no more than 200 percent.

To avoid breaking the law on the biggest wrestling weekend of the year, NJSIAA officials were forced to comply with acting education commissioner Bret Schundler's decision - which came less than 24 hours before Boardwalk Hall's doors opened - to lower ticket prices from $8 to $2 for students and seniors. Adult prices dropped from $10 to $9. Earlier, ticket prices at the tournament's district and regional levels were reduced from $6 for adults and $3 for students and seniors to whatever host schools charged during the regular season (typically $3 and $2, respectively).

Of the 32 NJSIAA-sponsored championships - more than any other state in the country - only wrestling, football, basketball and track-and-field make money during the postseason, helping sustain all nonrevenue-generating sports, fund NJSIAA-required steroids testing and cover expenses at nonschool venues. Michael Herbert, the association's attorney, told local reporters that it costs the NJSIAA $113,000 to hold the wrestling championships at Boardwalk Hall, including more than $71,000 for rental of the facility, $10,000 for officials and almost $7,000 for law enforcement.

The association reports that it netted approximately $154,000 from the tournament ($40,000 less than in 2009) but lost approximately $50,000 during regional and district rounds - events that previously generated revenue. Overall earnings from the tournament were expected to be down more than $100,000. "The fact that we may have made some money is not the issue," Herbert told The Star-Ledger of Newark. "We were hoping to make around $170,000, and we're below that. The assumption is, if you make money for one event, that should be the end of the discussion, but in fact we need this tournament money to help bring along the other activities."

"To say you're making money hand over fist is not a fair analysis of the situation," Kanaby adds, indicating that there could be a fundamental misunderstanding at the state government level of how state high school associations operate. "Fencing doesn't make any money. So how is it funded? It comes from where you can generate income."

New Jersey ranks as the nation's eighth-largest statewide high school athletics association, with 434 member schools and 260,000 student-athletes, but its smaller counterparts face similar challenges in keeping nonrevenue sports alive. Take the Arizona Interscholastic Athletic Association, which counts 276 schools as members. Earlier this year, the AIA raised ticket prices for adults from $8 to $10 for state semifinal and championship basketball games held at nonschool multiuse venues such as Tim's Toyota Center in Prescott Valley, Jobing.com Arena in Glendale and Wells Fargo Arena in Tempe. The student price of $6 did not change.

The association's executive board determined that the increase was necessary to help sustain other sports, says AIA's director of business media Brian Bolitho, adding that there was little pushback from fans - or Arizona lawmakers. The association last raised basketball tournament prices five years ago, from $6 to $8 for adults.

"If you're going to expect 40,000 people to walk through the doors to see an event over two or three days, you need a space that can hold them," Kanaby says. "Otherwise, you have to take it to a smaller gym that can hold 3,000 people and not be able to get all of the parents, friends and students in there. Then there would be a hue and cry about why you're not putting the event in a bigger facility."

Bolitho claims that Arizona's ticket prices for state tournaments are among the lowest in the country, but the NFHS can't back that up. "That's certainly information we should have," says John Gillis, an assistant director at the federation. "We survey for a lot of different things, and given what's going on in New Jersey, numbers like that have probably never been more important."

Meanwhile, New Jersey lawmaker Burzichelli shows no sign of ending his crusade against the NJSIAA. Before the wrestling championships had even concluded, he was rallying for the State Commission of Investigation to look into the association's finances and operation.

Even if his issues with the NJSIAA run deeper than ticket prices, the association is left facing a funding conundrum. Administrators planned to form a committee to examine the financial impact of the new law, and they also are evaluating whether they can continue to afford Boardwalk Hall. Despite the decreased ticket prices, overall attendance at the wrestling championships dropped about 7,000 this year, to just more than 33,000.

Concerns also quickly turned to the spring sports season, largely because all state championship events are held at high school facilities except the boys' and girls' lacrosse finals - meaning that, as the situation now stands, the NJSIAA won't see much postseason revenue: Regular-season admission to all baseball and softball games, as well as track meets, is free. "Besides the lacrosse championship games, we can't charge a dime for anybody," Herbert told The Star-Ledger. "But we have to provide the finance. It just doesn't make any sense."