Assuming the USOC retains its British Petroleum sponsorship, can it avoid tarring its own brand? 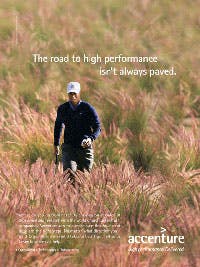 BP is not, as of this moment, a great partner for the USOC.

You'd have to go back to last Nov. 30 to find as memorably awkward a connection between corporate sponsor and beneficiary. That was the day, 72 hours removed from Tiger Woods' errant drive onto his neighbor's lawn, that Accenture ran an ad in the Wall Street Journal featuring Tiger alongside the tagline, "The road to high performance isn't always paved."

The marriage of the U.S. Olympic Committee and British Petroleum is unlikely to produce any ironic marketing offspring; both organizations were fortunate in that visible proof of their union (such as ads featuring American athletes touting the oil company's gold-medal engineering) had not yet been created. And so far, at least, neither appears to be contemplating a hasty divorce - the USOC, which inked its sponsorship deal with BP two months before "top hats" reentered the lexicon (in February), still is insisting that it will stand by its, uh, men.

"BP is in the middle of a crisis that everyone is interested in resolving as soon as possible," USOC spokesman Patrick Sandusky wrote in a June e-mail to The Chicago Tribune. "Based on our discussions with them, it appears that they are doing everything they can to stop the spill and to mitigate its effects. They have agreed to take full responsibility for all of the cleanup costs. This is a terrible accident that has affected an untold number of people as well as our environment, and we trust that BP will continue to act aggressively to stop the flow of oil into the Gulf of Mexico, to address the damage that has been done and to ensure that this tragedy is not repeated." 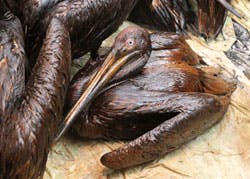 The USOC has to hope that BP's oil slick does not stain the Olympic rings.

Can the USOC avoid damage to its own brand? Olympic rings coated with oil were not what the organization had in mind when it took between $10 million and $15 million of BP's money (to be paid out over the next four years). Accidents happen, but BP has come to appear not only villainous but also incredibly inept. Other corporations whose reputations became tarnished (or tarred) didn't have this problem - Enron was pretty good at what it did before its house of cards collapsed, while Exxon could always pin the blame on one drunk captain. The USOC takes a big risk associating the Olympic movement with (dare we say) a bunch of amateurs.

In the end, it may be BP that ends the partnership. In this story's great irony, the UK energy giant intended its U.S. Olympic sponsorship as a way to promote its environmental efforts. In an interview with The Associated Press back in pre-spill February, Luc Bardin, BP's chief sales and marketing officer, said, "We believe very strongly that we need to tap all available natural resources to provide this country a more secure, lower carbon future."