Developers of an online education tool seek to foster systemic change on the sportsmanship front. 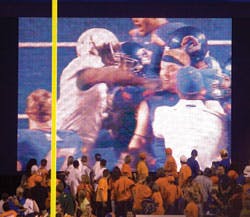 Having just been held to negative rushing yardage in a 19-8 loss, University of Oregon running back LeGarrette Blount put his personal post-game frustrations on full display. As shown repeatedly on Boise State's video board to widespread partisan jeering, Blount dropped Bronco linebacker Byron Hout to the blue turf with a clean right cross to the jaw.

It was Thursday, Sept. 3 - opening night of the NCAA's Respect Weekend.

Earlier that day, Oklahoma State University coach Mike Gundy was sufficiently unnerved by the prospect of a pregame handshake between entire teams - the focal-point designate of Respect Weekend proceedings on campuses nationwide - that he announced his team would not participate when Georgia visited that Saturday. "Our first concern was [we'll] have 115 guys out there, and they'll have 70. It just takes one guy to pop off," Gundy explained during a subsequent media luncheon. "Then I don't know how you're going to break it up. How do you control something like that?"

The traditional gesture of sportsmanship concerns others for a different reason. "The handshake is the simple solution that everyone can agree on, but it's something that really takes place at a very superficial level," says Colby Jubenville, director of the Center for Sport Policy and Research at Middle Tennessee State University. "While the handshake is something that is symbolic and I think suggests unity and fair play, at the end of the day these teams are all out there to win. It's this 'win big, win now' mentality that I think really confuses the student-athlete and feeds the fan."

Jubenville has given student-athletes and coaches food for thought in an online tool that attempts to put the individual's values, standards and beliefs to the test with the hope of fostering responsible actions in the future. The interactive platform, called RealSportsmanship, consists of a dozen hypothetical scenarios (interspersed within a narrative of the student-athlete's often "blurry" life experience) to which the user must react. Released weeks prior to the 2009 football season, a RealSportsmanship college version features one scenario that foreshadowed what transpired in Boise: "Following a heated game, a teammate lets his emotions get the best of him. While coming off the field, your teammate sucker-punches an opponent, causing a fight between coaches and players." The user's response (from a list of five ranging from "This could never happen to me" to "I have seen this happen") is then compared instantly against peer percentages. It's an exercise in introspection, but within a larger social-norms context. "This isn't a video game," says Jubenville, who was challenged to make the experience as engaging as possible. "The way that I felt like I could build in some interaction was through peer-to-peer information."

The whole process of clicking through narratives and hypotheticals takes 45 minutes or less for the individual, but has proven to yield impressive long-term results at the high school level. Of the two state athletic associations that have mandated similar RealSportsmanship platforms, Alabama has witnessed a 62 percent decrease in fall season (primarily football) ejections over four years and Mississippi has seen a 44 percent drop within three, according to Brian Shulman, a former Auburn University football captain and founder of Learning Through Sports, which produces RealSportsmanship. Shulman, author of The Death of Sportsmanship and How to Revive It, has been addressing the problem for the past 10 years, and he empathizes with the monumental task facing the NCAA. "Anything they can do to draw attention to it, I think, is positive," says Shulman, who nonetheless dismisses video presentations, guest speakers and signed conduct codes as ineffective. "To truly impact systemic change at its root level, it takes individualized education."

To that end, the college version of RealSportsmanship is currently being piloted in the Sun Belt Conference, where team rosters are loaded into a server and tracked to see if each student-athlete has completed the online survey. Participation in Sun Belt championships hinges on it. As of this writing, more than 2,600 student-athletes and nearly 300 coaches (who have their own platform) have participated. Data won't be analyzed until after the academic year, and no one is yet willing to assess even anecdotally what impact, if any, the program had through the fall. "I am encouraged but can probably make a better analysis in May, after we are able to compare discipline and ejection penalties to previous years," says Sun Belt commissioner Wright Waters. "I am convinced that sportsmanship is a national issue, and that it is not going to be solved with another PSA or poster, since we have been doing those for 30 years or more. We must address the core values of student-athletes, coaches and administrators." 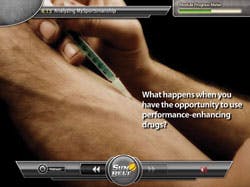 FOUR-TOOL PLAYERS RealSportsmanship is designed to help student-athletes evaluate their own values, standards, beliefs and actions.

Unlike the high school version, the college platform focuses more on off-field than on-field behavior - somewhat unfortunate, perhaps, in light of the eye gouging and pigtail pulling witnessed on college football and soccer fields this past November. According to Jubenville, merely getting campus stakeholders - presidents, athletic directors, coaches and student-athletes - to agree on what topics a brief survey should explore was a six-month process. That is not to say that the finished platform can't be tweaked based on user input or current events. The brief tribute to Tiger Woods' personal integrity featured in one Learning Through Sports product was removed within 24 hours of his recent infidelity confession.

The college platform is already customized to suit each Sun Belt campus individually. "If you're at Troy, you're seeing football and classroom pictures of Troy," Shulman says. "Hopefully, it keeps these college kids a little bit more engaged."

But are college kids - adults, actually - already too entrenched morally to be tweaked themselves? "It's a great question," says Shulman, who has also introduced behavioral products to elementary school children. "Obviously, we have a better chance of instilling values in a third-grader than we do a sophomore in college. Are we going to have the same impact on off-the-field issues at the college level? Are we going to see a 60 percent reduction? I don't know. I think it's really tough. But if a school can avoid the massive amount of bad will created by just one or two stupid things, I think it's well worth it. At less than $7 per student-athlete, it's worth a shot."

Blount's shot to Hout, which apparently was in retaliation for verbal taunts, cost him 10 games of the 2009 season and the University of Oregon untold public-relations capital. However, at least one interested observer believes that the pregame handshake, in which Blount participated, spared college football an even bigger black eye. "I thought to myself, 'What would have happened if they hadn't shaken hands before the game?'" Grant Teaff, executive director of the American Football Coaches Association, which partnered with the NCAA in presenting Respect Weekend, told ESPN reporter Joe Schad. "This wasn't a fight. This wasn't a brawl. I was impressed by the coaches and players who showed restraint and self-control."

Still, not everybody buys into such quick-fix theories. The Sun Belt commitment to RealSportsmanship covers five years. "This is a five-year effort, and we know that we might not get it completely right on the front end," Shulman says. "We think we're going to do pretty well, because we've researched it, but you never know. It's not the be all, end all. You're not going to just implement our program and it's like you took a Crestor and now your cholesterol comes down. You have to work hard at it."

"I certainly don't want to paint a picture of me being this moral compass," adds a likewise humble Jubenville, who as a Division III defensive tackle once punctuated a "kill shot" by stepping on his supine opponent. "The reason that I focused my Ph.D. dissertation on the coach-athlete relationship was because of the miserable experience I had at Milsaps College. At the end of the day, what really drives me is creating quality sports experiences."

Based on his own playing days, which included Southeastern Conference championships in 1987 and 1988, Shulman maintains hope that the student-athletes of today can become their own sportsmanship police. "The only way that you're going to reduce these situations and issues, whether on the field or off the field, are with the men and women on the teams. To expect a coach to manage that whole process is ludicrous," he says. "How do we get members of the team to take on leadership roles? I think that's where you're going to see this product progress."