Creative Seating Configurations Give Schools More Venue for the Money 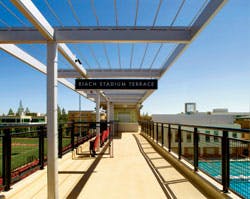 For years, architect David Body had been waiting for the right project to come along that would allow him to create a hybrid seating structure designed to serve two dissimilar athletics venues. His vision was finally realized in 2008, when the stadium at Chapman University's Erin J. Lastinger Athletics Complex opened on a piece of land so limited that a 900-vehicle parking lot had to be created underground.

Designed by the Los Angeles office of Cannon Design, where Body is a principal, the stadium-seating structure bisects a plot that features a synthetic turf football field on one side and an Olympic-size swimming pool on the other. With chair-back seating for 2,000 spectators on the field side and 600 chair-back seats overlooking the outdoor natatorium, the facility maximizes available square footage and achieves economic and programmatic savings - with locker rooms, a training center, storage areas, meeting rooms, offices and classrooms all situated beneath the seats.

"You always have something in the back of your mind that you want to do, and sometimes you can never find the right client or the appropriate time," Body says. "But I've always wanted to do an overlapping seating concept like this. The site was perfect."

"We were landlocked and told that the university could not give us any more land to expand," explains David Currey, Chapman's director of athletics. "We had doubled in enrollment the past 10 years and only had one field to serve the entire university."

But then the university was allocated space for another field and a new aquatics complex that included an existing parking lot where the pool now sits, and suddenly a multipurpose seating structure seemed to be the only viable option for squeezing in spectators at both facilities. "The initial reaction was, 'This is too expensive,' " Currey says of the $25.3 million complex. "The reality is that this is the best bang for our buck."

"The configuration lets you share all the obvious things like toilets, concessions and exiting - and, in this case, lockers and training facilities," Body says. "And the top deck, which is essentially used for VIP suites and coaches' boxes, also looks down on the pool, so there are a lot of marketing opportunities to have receptions on the top deck for either a football game or an aquatics event." 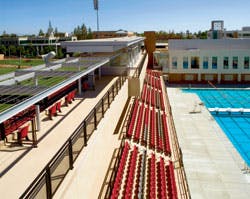 Photo of the Riach Stadium Terrace overlooking the outdoor natatorium at Chapman University.

Although Chapman was the first opportunity for Cannon's L.A. operation to design multiple venues with one seating structure, antecedents date back to at least the late 1980s, when Boston College's Silvio O. Conte Forum, home to the Eagles' basketball and hockey teams, opened with luxury boxes that overlook both the arena floor and the outdoor field at adjacent Alumni Stadium.

More recently, the State University of New York at Cortland Stadium Complex opened in 2002 with a pair of multipurpose synthetic turf fields divided by two sets of grandstands that share the same glassed-in press box, concessions areas and a common walkway; the grandstand seats 5,000 for the main field and 1,500 on the auxiliary field side. And Ulrich Sports Complex, the latest athletics facility built at Lehigh University, features back-to-back bleacher grandstands that separate synthetic and grass fields for field hockey, soccer and lacrosse.

Both the Lehigh and SUNY Cortland facilities provided inspiration for Holmes Stadium, a covered structure with chair-back seating set between two fields at Bucknell University. Graham Field, a synthetic turf surface for field hockey and women's lacrosse, opened in 2003; Emmitt Field - with its natural grass for men's and women's soccer - was dedicated two years later. Holmes Stadium, the complex's third and final phase, made its debut in 2007.

Each side of the "spine," as staff members call it, mirrors the other, with 550-person seating capacities. Temporary field-level seating is available along the far sidelines of each field. The south end of the facility includes a ticket booth, concessions area and restrooms that serve both fields, with a pair of team rooms and a changing room for officials located at the north end. A first-floor VIP viewing suite and meeting room, a second-story glass-enclosed press box and a third-story filming platform are incorporated into the center of the grandstand.

"We were looking for some way to pull both fields together, but we knew we weren't going to do it all at one time," says Tim Pavlechko, Bucknell's senior associate athletic director. "Before the turf was even installed, we knew we wanted some sort of A-frame in the middle. Our idea back then was very small-scale, but through the generosity of a wonderful donor in the Holmes family, we were able to design that structure as a covered, elevated grandstand. The beauty of the A-frame is the cost savings it offers. We built one set of restrooms, one concessions stand and one press box for two fields - rather than all of those support amenities at multiple fields." 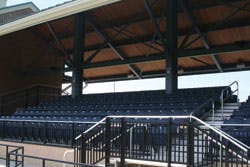 Bucknell and Chapman host events in succession at their dual facilities, but seldom (if ever) simultaneously. The main problem is noise. Public-address announcements, spectator sounds, music and officials' whistles would collide in a cacophony that would distract athletes and fans at either field. Additionally, in Bucknell's case, there is not sufficient locker room space at Holmes Stadium for more than two teams at a time.

Chapman has its own logistical challenges. "The only fan entrances to the aquatics side are on the field side, so fans have to enter on the field side to get to the pool side," Currey says. "We have to close off certain entrance areas for each event. This takes game management skill and organization. It also requires patience from the fans when we have to redirect them to event areas."

By now, Bucknell's fans might be getting used to the idea of venues with shared spectator facilities. In 2003, the university dedicated the Kenneth G. Langone Athletics & Recreation Center, an indoor multipurpose facility that boasts a shared concourse between the 500-seat Arthur D. Kinney Jr. Natatorium and the 4,000-seat Gary A. Sojka Pavilion. A glass wall divides the second-level spectator concourse shared by the pool facility and the basketball arena, and the concessions areas and restrooms serve both venues. The facility does schedule aquatics events and basketball games that overlap, Pavlechko says, meaning that restrooms for as many as 4,500 spectators had to be installed to satisfy building codes. (Because Holmes Stadium only hosts one event at a time, state building codes required only enough restrooms for 550 fans, not 1,100.)

Both facilities offer familiar experiences for fans who regularly attend multiple Bucknell sporting events. "Holmes Stadium provides consistency for our fans, whether they're coming in the fall for field hockey or in the spring for women's lacrosse," Pavlechko says. "The Athletics & Recreation Center provides flexibility and roominess for swimming and water polo events, because there is an open concourse for a 4,000-seat arena."

And because swim meets and other aquatic activities are not ticketed events, basketball ticket holders occasionally will wander across the concourse to check out what's happening at the natatorium. Says Pavlechko, "To get basketball fans into a water polo event to watch a game certainly adds to the excitement for those student-athletes."

While venues with shared seating structures typically are located on NCAA Division II and III campuses, the concept also could work at high schools or perhaps even municipal facilities. (Division I institutions draw crowds that likely would be too large for this type of hybrid and may not have the inclination to seek such efficiencies on their often larger campuses.) "I'll be honest with you: If you have the room, you probably have a different master plan than we do," Pavlechko says. 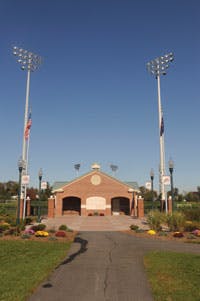 Photo of dual entrances to Holmes Stadium at Bucknell University

"Smaller schools are looking for ways to economize on either space or money," says Dave Bisbee of Philadelphia-based H2L2 Architects/Planners, the project manager for Holmes Stadium. "It's a budget thing, born out of certain constraints. But sometimes constraints lead to creative solutions. Each field gets a facility that independently might not have been affordable. But factor in the double usage, and you can start to justify the expense. Building one of these is a lot cheaper than building two separate ones."

Body is quick to note, however, that this approach may not be as much of a money-saving venture as it initially seems. After all, high schools and small colleges often sell concessions off tables set up behind the stands, mitigating the need for concessions space in the first place. Additionally, locker rooms don't necessarily have to be located adjacent to the playing field. "I'm not so sure you save a lot," Body says. "You'd have to build toilets anyway, but California state building codes require you to build toilets assuming that both events are going on at the same time. So at Chapman, you have to have toilets for 2,600 people."

Although Body relished the opportunity to design the Lastinger Complex, he says he struggled trying to find the proper balance between the maximum number of seats on both sides of the grandstand structure and all of the access requirements for a dual-use facility. Entrance and egress strategies certainly would have been easier in either a single-venue setup or a location with more available land. "If you had a lot more space, you could do a lot more at the ends," he adds - including the addition of vomitories and the extension of the grandstand past the stadium's 308-foot length.

Nevertheless, this concept is something both Body and Bisbee say they would not hesitate to introduce to another facility's master plan, provided the right situation comes along. "I don't know the odds of getting someone else with a piece of land that would work for it," Body says. "You have to have a bit of luck with that. Most places have a football field and may have a pool. But it was unusual to find someplace that needed both at the same time."

Bisbee says the greatest challenge the Bucknell project presented was that both fields were already active when Holmes Stadium was built. "In an ideal world, the facility would go in first, and then you would build the fields on either side of it," he says. "So our construction logistics were very limited, in terms of being able to protect the fields while getting construction vehicles in and out of a constricted site."

But opening Emmitt and Graham fields - even with only temporary seating - was the top priority, Pavlechko says, which is why Holmes Stadium was the project's final phase. "I wouldn't change a thing," he says. "I really do think the efficiencies we experienced in construction and event management costs have been big positives - so much so that as we look at future projects, we're trying to incorporate that same type of shared usage to maximize our efficiencies and build the best facilities we can."