Rendering courtesy of City of Auburn

Auburn, Wash., city officials in May celebrated breaking ground for a new 9,850-square-foot activity center and gymnasium that will provide a variety of athletic and recreation options for youths, teens, adults and seniors. The gymnasium will feature an outdoor climbing wall and a covered connection to the existing Senior Activity Center. The nearly $2.9 million building was designed by Tacoma-based BLRB Architects and is expected to be complete in spring 2011. Construction of the Auburn Community Center, representing phase two of the community campus project, is slated to begin in mid-2011. The cluster of nearby amenities also includes a library, the parks and recreation administration building, and the White River Valley Museum. A 32,000-square-foot barrier-free playground is also under construction. . .

Moonraker 2.0, a student-designed robot that won a $500,000 prize from NASA last year for its ability to excavate moon dust, was used to break ground for a sports and recreation center at Worcester Polytechnic Institute. Presenting an attractive two-story facade to the main campus and a dramatic five-story facade to playing fields below, the $53.2 million, 145,000-square-foot center will be available to students, faculty and staff. Designed by the Boston office of Cannon Design, the center will include 14,000 square feet of fitness space, a four-court gymnasium, a competition swimming pool, a three-lane elevated jogging track, racquetball and squash courts, rowing tanks and workout studios. In addition, the facility will have space dedicated to WPI's robotics program, and will enable WPI to support regional and national robotics competitions. The facility is scheduled to open in August 2012. . .

Members of the Corporation of Brown University broke ground in May for construction of a $46 million addition to the university's Hope Street athletic complex. Four new facilities - the Katherine Moran Coleman Aquatics Center, the 10,000-square-foot Nelson Fitness Center, the 12,000-square-foot David J. Zucconi '55 Varsity Strength and Conditioning Center, and a landscaped greenspace replacing a parking lot - will be built on and near the site of the former Smith Swim Center, forming a new athletics quadrangle. Designed by New York-based Robert A.M. Stern Architects, the additions to the athletic complex are expected to open in January 2012. The expansion will also add three exercise studios, new offices for coaches and administrative staff, varsity locker rooms attached to the natatorium and social spaces. 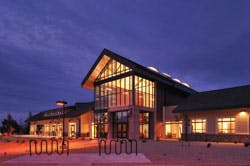 The 53,000-square-foot Cottonwood (Ariz.) Recreation Center, which includes indoor leisure aquatics facilities, a fitness center, health facilities and an office complex, opened in May. An existing eight-lane outdoor lap pool was also being renovated and was scheduled to open in June. Located in a park setting near the library, senior center and hospital, the $17 million facility was modeled after the city's old train station, which is now home to the senior center. The building is organized by a two-story daylit central spine, which links its active and passive functions, and it features energy- and water-saving measures such as skylights, automatic lighting controls, extra insulation, and a regenerative media filter in the pool.