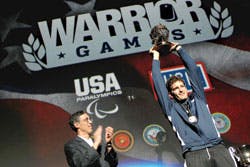 After an improvised explosive device in December 2005 left 80 percent of U.S. Air Force Tech. Sgt. Israel Del Toro Jr.'s body covered in third-degree burns and caused his lungs to fill with smoke, doctors told his wife, Carmen, they didn't expect him to pull through. "Every time they told me he wouldn't make it, I would say, 'Yes, he can!' " she recalls. "I know him. I knew he could pull through. He is so strong." Less than five years later, Del Toro - missing fingers on both hands, and the majority of his body badly scarred - biked 10 miles, ran 1,500 meters, shot a rifle, threw a shot put and swam 50 meters, all as part of the Warrior Games, an Olympics-style competition held for the first time in May.

Two years ago, a sniper's bullet shattered Army Sgt. Juan Alcivar's upper right leg. Last year, largely immobilized by the injury and struggling to stay active, the 26-year-old weighed as much as 280 pounds. By the Warrior Games' opening ceremonies, after which he competed in rigorous cycling and sitting volleyball events, Alcivar had already shed 50 of those pounds.

In 2004, while serving his second tour of duty in Iraq, Marine Captain Jon Disbro was protecting a power plant south of Baghdad when a mortar round landed on his position and pieces of shrapnel tore up his right ankle. Six years, a marathon and a duathlon later, Disbro was swimming and running head-to-head with other permanently wounded competitors during the inaugural Games. 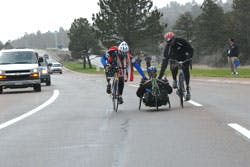 U.S. AMBASSADORS Creating a sense of camaraderie among soldiers who may have previously felt isolated by their injuries was a primary goal of the inaugural Games.

The event also represented a rededication to one of the key missions of the USOC's Paralympic movement, which was originally born of a rehabilitation program developed for soldiers injured during World War II. That has evolved into the USOC's Paralympic Military Program, formalized in 2003. "That's where the paralympic movement started," says Charlie Huebner, chief of paralympics for the USOC. "This event hits pretty close to home for us - it's always been a core part of our mission. Injured service members using sport as part of their rehabilitation is why we exist."

The Warrior Games were organized in a mere eight months, as U.S. Paralympics and the DoD reached out to wounded soldiers, coaches and trainers who were already participating in rehabilitation programs involving adaptive sports. "All these different installations came together," explains Huebner. "We have programming right now at 30 military installations, 140 communities and four military medical centers. The members of our armed forces are not only athletic, they're competitive. So, their everyday activity led us to the concept of creating a competition, and it was determined that there was no better place than the Olympic Training Center."

Athletes competed in teams and as individuals in shooting, swimming, archery, sitting volleyball, cycling, wheelchair basketball, and track and field events. After winning gold in both sitting volleyball and wheelchair basketball, the Marine Corps team was presented with the Chairman's Cup, bestowed to the branch team with the most points, based on the total medal count. The Games' top individual honor - the Ultimate Champion Award - went to Navy Petty Officer 1st Class Daniel Hathorne, a special warfare boat operator who was hit by a truck last year during an overseas deployment. Although competitive and filled with "magical performances," as Huebner puts it, participation in the inaugural Games was admittedly modest (for comparison's sake, the Summer Paralympic Games involve more than 4,000 athletes from 180 countries, while the Winter Games attract 600 athletes from 38 countries).

But Huebner points out that, unlike many Paralympians, virtually all of the athletes participating in the Warrior Games suffered their debilitating injuries within the past few years. "These are recent injuries," he says. "The majority of them have been in the past five years, and many of them are combat-related."

More important, says Huebner, the scope of the 2010 and future Warrior Games is not meant to span a mere five days, or be limited to competition. "This is meant to be an aspect of the healing process," he says. "It allows us to further educate and train staff that come from installations all over the country." 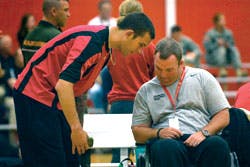 Photo of a Warrior Games wheelchair basketball athlete and coach

In fact, says Huebner, the main emphasis of the Paralympic Military Program is to promote community programming at all levels that will benefit wounded soldiers. Addressing the athletes during the Games' closing ceremonies, Chairman of the Joint Chiefs of Staff Navy Adm. Mike Mullen said, "Now is no time to rest. I'd like you to take what you've learned here and continue to serve as role models for others striving to find the independence they need."

For its part, U.S. Paralympics has begun forging new community partnerships involving military personnel and nonprofit and municipal recreation providers. Most often, the biggest problem is not a lack of facilities, but a lack of quality programming for disabled populations. "A person playing wheelchair basketball plays in the same gym as every other person playing basketball, but there might not be a coach at a parks and recreation department who has enough expertise to provide an appropriate program," Huebner says. "That's what we're trying to get involved in - not just at installations, but in the community. We don't need to build a new gym. What we need to do is provide expertise."

To that end, U.S. Paralympics has been developing its ambassador program, which was also a key component of the Warrior Games. There are currently 50 official Paralympic ambassadors - all of them Paralympians - who participate in programming throughout the country, while also attending clinics and visiting military installations and hospitals. 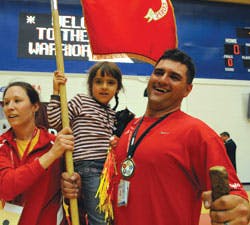 John Register, a U.S. Army veteran who served during operations Desert Shield and Desert Storm, was an Olympic qualifier and All-American track star at the University of Arkansas. After a training accident, Register's left leg was amputated. He's now a director of the Paralympic Military Program and, according to Huebner, represents the quintessential ambassador.

"He not only has been to Walter Reed, he's rehabbed at Walter Reed as a patient who lost a leg," Huebner says. "When someone becomes physically disabled or injured in combat, there's nobody better - not only for the injured person, but for his or her family, too - to step into the rehabilitation process than somebody who's been there."

Thus, bringing wounded soldiers to Colorado Springs presented not only an opportunity for competition, but also a chance for athletes to meet people who may be coping with similar physical or emotional stresses. It's that kind of interaction, not the hunt for medals, that can provide lasting inspiration, suggests Huebner. "When you're with other folks who've gone through some of the same obstacles you face, there's learning and there's healing," he says. "There's an inspirational component there that's allowing people to jump back into an active lifestyle."

And that doesn't just involve elite-level sports. "The Olympic Training Center is a magical place unto itself, and just coming out here is definitely inspirational to these men and women," Huebner says. "But it also reminds them that they can get out there and be as active as they want to be. That could be recreationally in their backyard or, if they have the talent, possibly pursuing the Paralympic Games."

There are inherent upsides to rehabbing disabled military personnel. For starters, they are not strangers to physical activity. But perhaps more important, says Huebner, "They are motivated. Our young men and women are motivated to get healthy and motivated to get back to their jobs, whether that's serving their country or just returning to their community."

For the success of future Warrior Games, organizers are hopeful this year's participants also are motivated to spread the word. "The feedback has been phenomenal, and there has been an energy from those people who attended," says Huebner. "We had a great five days at the Warrior Games, but the 360 other days back in the communities are what's critical."