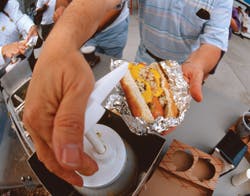 NO RELISH An overview of health inspection reports has cast an unappealing light on concessions operations.

At Great American Ballpark in Cincinnati, a concessions employee was spotted scraping a spatula against the rim of a garbage can, then putting the utensil back to use preparing food. At Jobing.com Arena in Phoenix, ice cream was seen being scooped with a server's bare hands. One worker at Bank of America Stadium in Charlotte, N.C., got caught snacking on the contents of a fryer basket.

This is just some of the human activity covered (or uncovered) in a list of health inspection excerpts from all 107 venues that served the four major professional sports leagues in 2009. Compiled by Paula Lavigne and Lindsay Rovegno of ESPN, the list also sheds light on everything from insect infestation in liquor bottles (three different venues) to a lack of sneeze guards over buffets (two venues).

Mike Holtzman, president of Profitable Food Facilities in Poway, Calif., warns against over-sensationalizing the infractions, many of which, he argues, are understandable - if not forgivable - given their context. While the presence in some venues of roaches and mold gained widespread media attention, the most common red flag - storing or serving food at improper temperatures (with 28 venues cited) - didn't particularly shock Holtzman. "It doesn't make it right," he says, "but the fact that they aren't hitting temperature with food at a venue where they're serving 50,000 people in three hours isn't all that surprising." Plus, Holtzman argues, the citation could represent the lone stain on an otherwise spotless record. "Is it one time in 100 days that they had five hot dogs that were the wrong temperature?" he asks.

The answer should lie in documentation diligently kept by the food-service provider and available upon request to health inspectors. "If the temperature's down, they'll say, 'Show me your check-in sheets,'" Holtzman says. "And if you say, 'Oh, I don't have them,' that's easy to write up. If you can say, 'Dang it, we didn't get it in that hour, but here are the 27 days that we did,' they may say, 'Okay, we won't write that up. We'll just make you aware of it.'"

Other points outlined in the ESPN report that concessions operators everywhere should be aware of include the lack in some venues of hand-washing facilities, hot water, hand soap and towels, or inadequately concentrated sanitation solutions; chemicals improperly stored near food or ice-making equipment; raw foods stored in close proximity to ready-to-eat items; unclean countertops, utensils or food-preparation equipment; and inaccurate or ignored expiration dates.

"There are systems to these places, and you have to follow your systems," Holtzman says. "When inventory comes in, you put your new inventory in the back, and you put your old in front. First in, first out. You're relying on hundreds of people to follow these systems, and when a group isn't doing it, it really screws you up."

Inappropriate behaviors of concessions staff also include not washing hands or changing gloves after handling raw chicken, touching one's own face or blowing one's nose; handling ice or drink garnishes with bare hands; and drinking and eating in food-prep areas. Holtzman recommends covering such behaviors in staff meetings - or, in the case of many professional sports settings, 15-minute orientation sessions among volunteer food-handlers. "I would go through all those things and say, 'Joe, tell me about sneezing at the site. What should you do?'" Holtzman says. "You can have some fun with it, too. 'Hey, Harry, how about scooping that ice cream by hand. Is that cool?' Everybody will laugh, and you'll go, 'Look, an arena was just nailed for it. How do we learn from that? How do we ensure that it doesn't happen in our facility?'"

Holtzman likes to treat his food service facilities (his company has consulted with or handled the operations of more than 300) with the common sense he applies in his own home. "I don't have roaches in my house. I don't have mice in my house. I don't have bugs crawling on my counters. That's why those things to me aren't acceptable," he says. "But a salad that on one occasion is left out and allowed to warm? We have potlucks at the house, and sometimes we leave the Caesar salad out. That's where I draw the line on health." At the same time, he encourages concessions workers to put their vigilance where their mouth is, actually taste-testing food for temperature and quality while also visually inspecting it.

That said, Holtzman appreciates the role of the health inspector in the commercial setting. "Are the violations there? Yes. Are we glad that they come in and show them to us? Yes, because sometimes we forget," he says. "I applaud that they're there to catch those things, to make us aware of them and to help us make it better. That's what the health department is for.

"No one wants to serve bad food," Holtzman adds. "But it happens."