Some community college athletic departments are struggling to weather the economic storm. 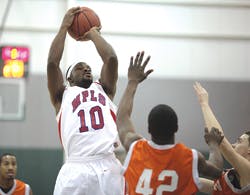 LAST SHOT Two years ago, Minneapolis Community and Technical College played for the NJCAA Division III championship, but the school has since dropped the program for economic reasons.

Less than two weeks removed from Mavericks Day, the MCTC Intercollegiate Fundraising Committee launched a campaign to cover operating costs for the 2010-11 men's and women's basketball seasons, but having failed to reach a target of $118,000 by March 1 of this year, the school dropped athletics altogether. By April, Pivec, who had gone 452-115 at MCTC and amassed 563 career victories, was both in the NJCAA Hall of Fame and out of coaching.

This is the economic climate many community colleges are now forced to endure, if endurance is even possible. Erie Community College in Buffalo, N.Y., cut eight teams in March. A year earlier, North Iowa Area Community College, faced with an $800,000 shortfall in state aid, saved $250,000 by eliminating football. Last fall, Mississippi governor Haley Barbour suggested that the state's 15 community colleges either downsize athletics substantially or dissolve their programs.

Compared to athletics on four-year campuses - where ticket, booster and sponsorship dollars flow more freely - community college sports can make for an easy target when times get tough. The irony is that, in this recession (and indeed because of it), enrollment at two-year institutions is booming nationwide. "When you look at explosive growth in the number of students who are coming to your campus, and you look at diminishing support from the state for your campus, you simply have to look at slicing your pie in a way that benefits most of those new students," says Mark Estepp, president of Southwest Virginia Community College, which suspended its lone sport - men's basketball - this year because of a lack of private funding. "Sadly, athletics often looks like a piece you can take out."

"We don't give degrees in basketball and volleyball," adds Missouri State University-West Plains chancellor Drew Bennett, of his school's bare-bones sports offerings, "so they're always on the chopping block when we face budget cuts."

Like many two-year schools, MSU-West Plains has been forced to reduce athletics salaries and trim budgets in an effort to ride out the recession. Taken somewhat by surprise by the severity of Barbour's statement, athletic directors in Mississippi presented cost-cutting recommendations to the Mississippi Association of Community & Junior Colleges in February. Measures in place for this academic year include: starting the football season one week later, thus reducing meal and housing expenses related to athletes on campus before classes actually begin; a 10 percent reduction in scheduled games for all sports except football and soccer, which have not restored games since adopting a similar reduction in 2001; elimination of all pre- and post-season scrimmages and games; exploration into the consolidation of athletic insurance or the increasing of deductibles; and exploration into the possibility of a mutual spring break for all MACJC schools, during which all athletic events would be suspended.

"I think schools are going into this year with a very good sense of doing things that are going to reduce costs for these next few years, and hopefully we'll get out from under this recession that we're in," says Jim Southward, director of athletics activities for the Mississippi State Board for Community & Junior Colleges. "But at the same time, we still realize that community and junior college athletics is a vital part of our educational system."

"Certainly, there are some colleges that are trying to weather the storm at this point in time, but there are also colleges that if it weren't for athletics, their doors might not be open," says NJCAA executive director Mary Ellen Leicht. "Athletics brings in full-time enrollment for those institutions, allows them to build their student population. Oftentimes, two-year college athletics is a rallying point for communities and a way for the college to reach potential boosters and sponsors. There are a number of reasons why athletics, while they do certainly cost some money, don't have to be financially detrimental to the institution itself."

NJCAA membership data, at least, don't appear to be sounding a death knell for junior college athletics anytime soon. In fact, 13 schools joined the association this year, and overall membership, which has fluctuated only slightly in recent years, stands at a solid 513. While MCTC and Southwest Virginia Community College dropped their NJCAA memberships, three other schools did so only to gain entrance into the National Association of Intercollegiate Athletics. Moreover, the 1,816 men's teams sponsored by NJCAA member schools this year is down by only four from 2009, while the number of women's teams has grown by 12, to 1,780. (In what he calls an "ironic twist to the story," Pivec, the displaced MCTC coach, has been hired to help start a men's basketball program at a Minnesota State Colleges & Universities System sister institution that's adding sports, even while he remains on the faculty at MCTC.)

At MSU-West Plains, situated in the 10th poorest congressional district in the United States yet home to the second-ranked women's volleyball team in NJCAA Division I last season, Bennett would much rather hold on to his two sports than fold them. "I think it's easier to try to maintain them at a reduced level than it is to cut them and try to bring them back, for two reasons," he says. "Number one, there's the hiring of personnel. But number two, there's the community support. We are beating the bushes for booster members and tournament sponsors and to get people to buy tickets and come to the games, but that still does not cover the cost of the sport. If we cut the sport, we lose all that support. I think trying to win it back is much more difficult than maintaining sports at a bare-bones minimum to see if we can survive the lean years."

Despite its long track record of on-court success, the basketball program at MCTC was no longer viewed as vital. According to Dawn Skelly, the school's director of marketing and communications, surveys conducted over three years revealed that MCTC students, many of whom come from low-income backgrounds, placed a higher priority on campus health services than intercollegiate athletics. With enrollment up 50 percent over the past six years and declining state funds dictating $2.5 million in budget cuts, only private donations could have saved the Mavericks, who historically owed their existence to student fees. But four months into the fundraising campaign, a mere five gifts had been secured. "This has led and will continue to lead to difficult decisions for the college," Skelly says of the economics of the situation. "There is no doubt that the basketball program has been important in many of the players' lives."

Likewise, suspending the Southwest Virginia basketball team's operations was not something Estepp, who resurrected athletics upon his arrival three years ago, took lightly. "The thing I hated about it is we had, in three short years, grown that program into a really fine basketball program," he says. "We had great athletes. More important, they were great student ambassadors. And we had a great coach."

But the fragile reality of running an athletics program at the junior college level became evident almost as quickly. Estepp's mandate that athletics be funded only through private benefactors worked fine the first two years, but as the economy continued to head south, donor dollars dried up. Meanwhile, basketball games were lucky to attract two dozen onlookers, most of whom were players' relatives. The team's head coach was moving on, as well. "It was as good a time as any to close the window," says Estepp, who little more than a year earlier had shuttered SVCC's baseball program. "That being said, they are suspended, not eliminated. I would love to bring them back once the economy improves."