One on One: Ballpark Organist Nancy Faust Gives Final Performance 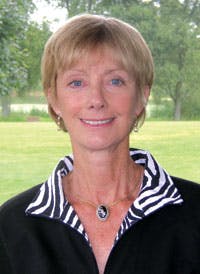 For more than 40 years, Chicago White Sox fans have been treated to the musical stylings of organist Nancy Faust. She started playing during the 1970 season and began making a name for herself by taking popular songs and turning them into ballpark battle cries. Her most notable rendition was of "Na Na Na Na Hey Hey Goodbye," taken from the little-known pop group Steam. Her role and her music have changed over the years, but she has continued to be a game-day icon for generations of Sox fans. In September, Faust announced that the 2010 season, her 41st, would be her last at Comiskey Park, and to honor her musical accomplishments, the Sox created a bobblehead in her likeness. Catherine Liewen asked Faust how the organists' game has changed over the decades.

Q: How did you get the job?
A: I've always been able to play songs by ear. When I was in college, my friends who were sports enthusiasts encouraged me to write letters and express interest to the White Sox. They felt what I could do lent itself to baseball, because there really is no time to refer to music.

Q: How have things changed since you started?
A: When I started there was just the organ and me located in the centerfield bleachers, and I would be able to play a complete song between innings. Now our time is limited by company-sponsored quizzes, games, races and all kinds of entertainment that doesn't involve the organ. In order to justify my being there, I had to adapt. So I started providing walk-on music for visiting players.

Q: How do you prepare for that sort of thing?
A: To tell you the truth, I don't. I just go there and play whatever comes into my head. I don't even look at a roster. Just give me a name, and I'll tell you what I can play for it. 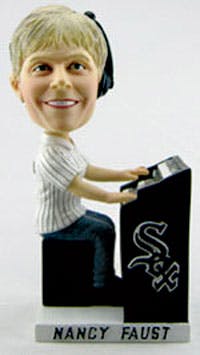 Q: What are some of your favorite songs to play?
A: My favorites are the songs that I've recently learned because I've had a chance to play them when people enter the park. If I play between innings at all, I have to modify a song to a glorified sound bite of 20 seconds. I've changed my style as music styles have changed. I would attribute my longevity to fact that I was able to do that. I've just incorporated everything I heard on the radio, including Lady Gaga, Black Eyed Peas and Jay-Z.

Q: What was your reaction to getting a bobblehead?
A: It was the ultimate tribute, particularly because it was a double bobble - both the arms and the head move. I made a speech on my last day, when we had a ceremony on the field. I said that when I analyze my career, I really didn't go to work - I went to a party. Everybody is having a good time, yet at the same time they are forming bonds, lasting memories and traditions. What a great place to spend 41 years.