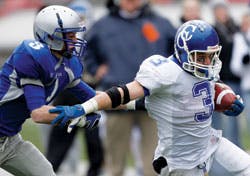 PUSH AND PULL Coaches and state administrators disagree on how to eliminate playing three games in 10 days.

Summer vacation is going to end earlier next year for Wisconsin's prep football players. The Wisconsin Interscholastic Athletic Association recently adopted, effective 2011, an Aug. 3 starting date for practices - five days earlier than the traditional start date. The move, which the association says was made in the best interest of the players, is proving to be an unpopular one with coaches. In a survey conducted by the Wisconsin Football Coaches Association, an overwhelming majority (307) was opposed to the early start date, while only 22 coaches were in favor.

The change was made so teams could space out their schedules and avoid playing three games in 10 days at the end of the regular season. With the increased focus on the long-term risks of concussions, especially in adolescents, most coaches and administrators agree that playing three games in such a short time was not a healthy choice and that the existing schedule needed revision. Wisconsin was one of a few states with a schedule that allows for more than one game a week. "No other level of football - college or professional - asks players to expose themselves to that degree," says Dave Anderson, the WIAA's executive director.

Adding to the health risks was the fact that the games came late in the season, when teams were vying for a playoff berth. This created an exciting atmosphere, but coaches have admitted that it wasn't in the players' best interest. "I enjoyed trying to get my team ready, and the kids enjoyed it, too," says John Hoch, president of the WFCA and coach at Lancaster High School. "But it's dangerous for them."

While the WIAA and the WFCA agree on the need to eliminate having three games in 10 days, they don't agree on how to do it. There were a limited number of options to solve the problem: end the season later, eliminate a game from the nine-game schedule or start the season earlier, as the WIAA chose to do.

But the coaches have serious concerns about how the board's decision could impact the state's football programs. An obvious concern is that players' and coaches' summers are going to be cut short. Kids will have a shorter break, and three games will be played before school starts, as opposed to two. By contrast, in Minnesota, football practice doesn't start until Aug. 15. Hoch is concerned this could lead to attrition of players and coaches. "We may lose kids on the bubble. You've just opened a door to say, 'I'm not playing football,'" Hoch says. "And in small schools, that means low numbers. And low numbers mean you're potentially going to lose football programs."

In addition, Hoch points out that many non-faculty coaches volunteer their time, and the earlier start dates could cause scheduling conflicts, potentially resulting in the loss of qualified coaches. "When you lose good coaches, you lose good players, and if that happens, the quality of football will go down in the state of Wisconsin," Hoch says.

Creating additional summer practice days also increases the risk of dehydration and other heat-related illnesses. Recent headlines telling of McMinnville (Ore.) High School athletes who developed rhabdomyolysis after exercising in extreme heat underscore the concern held by many people that players may be trading one risk factor for another.

While the WIAA's Anderson understands these concerns, he cites the association's 1998 implementation of hydration tests for prep wrestlers, which involved kids submitting urine samples. Detractors felt the testing process would alienate kids and hurt wrestling's numbers. "The fact of the matter is that it didn't happen. Kids that came out stayed out, and we had lower attrition rates," Anderson says. He also downplays the potential for heat-related issues by pointing out that heat stress is "100 percent preventable" and that an extra five days shouldn't necessarily pose a serious risk.

Extending the season wouldn't have worked because championship games are played at the University of Wisconsin's Camp Randall stadium. The unpredictable weather in the Upper Midwest means players could be exposed to frigid cold and snow in the outdoor venue. Minnesota is able to keep a later start date because championship games are played indoors over Thanksgiving weekend at the Minnesota Vikings' Metrodome. But with the Vikings in negotiation for a new stadium, that schedule could be in jeopardy and Minnesota could be in the same predicament as Wisconsin, says Kevin Merkle, associate director of the Minnesota State High School League.

The schedule many Wisconsin coaches seem to support is an "eight-plus-one": eight regular season games, with teams not making the playoffs having the option to play an additional game. They argue this would represent a happy medium between simply eliminating a game and starting the season earlier. Minnesota has an eight-game regular season with the ninth game as the first round of playoffs. Minnesota's model differs in that it has almost every team qualifying for the first round of playoffs. "In our case, we probably have 10 to 12 schools a year that don't make the playoffs," says Merkle.

However, Minnesota's schedule also has some drawbacks. The teams advancing have the potential to play three games in 10 days, although the state's Sports Medicine Advisory Committee hasn't found that to be a concern - at least not yet. The biggest problem Minnesota has with its current model is that top-ranked teams end up playing the lowest seeds. "We really end up with some one-sided games," Merkle explains, "and that's when people get concerned with injuries."

Anderson shares that concern regarding the eight-plus-one model. He says many WIAA members question whether an 0-8 team will want to travel two or three hours to play another 0-8 team in a meaningless ninth game. "If you're 0-8, and you're a school administrator looking at the budget, and now you have to find another grand for travel and buses, you're going to tell me to go jump in a lake," he says, adding that under the current system, teams already have the option to play a 10th game, but rarely are there more than six teams per year that do.

Even though the WIAA made its ruling, the debate seems far from over. Both sides agree that the differing opinions are philosophical and not adversarial. Says Anderson, "I think all involved are working toward the best outcomes for football, the student-athletes and this membership as a whole."