At least four Gold's Gym franchises distance themselves from the health club giant after a donation to an anti-gay political group. 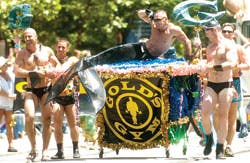 PRIDE AND PREJUDICE Some Gold's Gym franchises and frequenters are walking away from what they once thought was an LGBT-friendly brand.

In late October, with midterm elections less than a week away and money being pumped directly into campaigns or to the indirect benefit of candidates at an unprecedented pace, a rift developed at the unlikely nexus of politics and the for-profit health club industry. At least four Gold's Gym franchises distanced themselves from the brand in the wake of a $2 million political donation made by the CEO of Gold's ownership group, TRT Holdings.

The franchises, all located in the San Francisco Bay Area, claimed that Robert Rowling's donation to a political group that supports candidates seen as adversarial to gay rights compromises the clubs' standing among lesbian, gay, bisexual and transgender members. "Gold's Gym San Francisco has long been a pillar of the gay community. We will continue to be," read a statement to customers from the club's director of operations Don Dickerson. "It is very unfortunate that the CEO of TRT Holdings has chosen this course of action. We do not support it in any way." Dickerson's club, a Gold's Gym for more than 20 years, will allow its franchise agreement to expire Sept. 15, 2012, if it can't legally sever ties sooner. In the meantime, it has pledged donations to LGBT charities (above those it typically makes) in amounts that match the franchising fees it must continue to pay Gold's.

A petition denouncing the donation as coming from someone who has gotten rich in part on the dues paid to Gold's Gyms by LGBT members received thousands of signatures at change.org.

A statement issued by Gold's Gym International to huffingtonpost.com denied any direct connection between Gold's and any political organization, and pointed out the brand's longtime support of PRIDE events and LGBT media outlets and charities. The statement concluded, "Gold's Gym is a non-political organization and our members' dues are not used to fund political candidates. Bob Rowling, the CEO of our ownership group, TRT Holdings, made a private donation completely independent from (and not on behalf of) Gold's Gym. It is important to note that most Gold's Gyms around the country are independently owned and operated by franchisees. They are hard-working small business owners who embrace and accept members from all walks of life. We hope that our friends and longtime members of the LBGT community understand that our sole purpose as an organization is to help people reach their fitness goals. Tens of thousands of dedicated employees go to work every day across the country for this very reason. They will continue to do so for the LGBT community and all of the other diverse communities we serve."