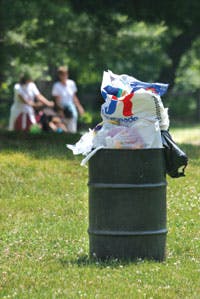 Photo of a garbage can in a neighborhood park, a sight no longer seen in St. Lucie County, Florida

The St. Lucie County (Fla.) Commission thought it had figured out a way to cope with a drop in both staff and tax revenues: In the fall, the county converted 10 of its 77 parks into "Pack It Out Parks" - a system modeled after successful programs in Seattle and the National Park System that requires park patrons to take their trash home with them upon leaving. St. Lucie County Parks and Recreation manager Guy Medor even suggested visitors begin carrying trash bags with them.

But the new program hasn't gone as smoothly as anticipated. "I have had reactions from the public that indicate the savings are not worth the service reduction in these areas," commissioner Charles Grande told TCPalm.com. "Upon reflection, I agree with the public."

All garbage cans were removed from the 10 impacted parks, and four restrooms were closed in an effort to keep the parks open and save an estimated $190,000 a year while coping with the department's loss of 26 full-time employees over two years. Those particular parks were chosen based on their type, location and daily use. Prior to the cuts, the restrooms were serviced five days a week, and trash was emptied every Monday and Friday, according to reports.

"Because of this, maintenance will have to increase in the long run and the parks are going to deteriorate," Port St. Lucie resident and avid park user Michael Sabater told TCPalm.com. "People are going to end up throwing their trash on the ground and forgetting about it."

As of this writing, parks and rec administrators were considering other cost-saving alternatives, including inviting nonprofit organizations to clean the parks as a service to the community.

"We're not going to turn our back and let the parks go to waste," Medor said at the time the Pack It Out Parks initiative was announced. "Our response time is going to be affected, but we will still mow and monitor the parks, but not as often."

County parks director Debbie Brisson added that the new policy was a good way to involve park users in the stewardship of parks. "It's an educational process for people to help us maintain these neighborhood parks," she told TCPalm.com reporter Nicole Rodriguez. "And it's been very successful in other parts of the country."