Agencies are turning to television as a low-cost means to market their services. 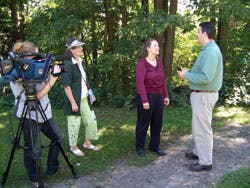 ON LOCATION The television production crew and South St. Paul (Minn.) parks and rec staff meet regularly on site to better connect viewers to their local parks and recreation facilities.

A promotional clip for a regular video series produced by the New York City Department of Parks and Recreation features New Yorkers of all ages and ethnicities at various city parks declaring, "It's my park." Among the cast are former New York Giants wide receiver Amani Toomer and actor/comedian Bill Murray, who's standing in snow-covered Central Park when he delivers his line, stutters, then admits, "Well, it's our park, technically."

Using video to promote parks and recreation programs and facilities is not a new concept, but it may be seeing a resurgence in popularity as municipalities look for the most cost-effective ways to market their services. Though most agencies don't have the Hollywood contacts to cast the likes of Murray, most likely do have the budget to create high-quality videos.

"I would really encourage other communities to look into going down this path," says Robert Harris, director of parks and recreation for the city of Hamilton, Ohio, referring to "Hamilton Happenings," a 30-minute show focused on his department that is being produced every two months. "You would be surprised at how many people actually watch the show."

Chris Esser, director of the South St. Paul (Minn.) Parks and Recreation Department, is likewise surprised by the levels of viewership of a seasonal show focused on his department that has been produced quarterly - based on the recreation seasons - for the past five years. Says Esser, "I'm in our community center all the time, and I'm continuously amazed by the number of people who come in and say, 'Hey, I saw you on TV last night.'"

What Esser's and Harris' departments have in common is the fact that the production of their shows doesn't necessitate a line in their already stretched budgets. "The beautiful thing about the show is that it costs the city nothing," says Esser, adding that the Northern Dakota County Cable Communications Commission - which represents seven communities, including South St. Paul - produces the television program. That organization is funded largely through cable franchising fees collected from the region's dominant cable provider, Comcast. "The only thing that it really costs us is our time."

Naturally, a parks and recreation agency must develop a relationship with its community access television provider, which in turn can provide its television production expertise. Time Warner Cable franchising fees are the main source of funding for TV Hamilton, the cable access provider that produces "Hamilton Happenings."

"The city hasn't yet had to put in any money to make the TV show," says Harris. "We haven't had to come up with funding - just the talent and the time."

The time required simply to film even a half-hour show every couple of months is significant, considering most recreation staffs have been reduced during the latest recession. But for those recreation professionals willing to dedicate the time, it appears to be well worth the effort.

"It's good for marketing, but it's also about community awareness." says Esser. "We're fixing or renovating or creating new facilities constantly, and if people are not otherwise exposed to that piece of our parks system, they may not realize that these updates are happening. That's why we like to film on-site. We're making people aware of what their government is doing and how we're spending their tax dollars related to recreation."

Esser's staff will even use the show as a platform to discuss the specifics of new fees or policy changes at parks and rec facilities. "This media gives you opportunities that print media can't provide," he says. "You are able to verbally explain some things that can be difficult to get across in print."

Of course, video is not the only media through which departments promote themselves. But according to Harris, it's a particularly effective component of a comprehensive yet low-cost marketing strategy, which may also include social media such as Facebook and Twitter, regularly pitching story ideas to local newspapers and in-house print materials such as seasonal recreation guides. "In this economy, people are looking for inexpensive things to do in their community," Harris says. "They are looking to their parks and recreation departments for leisure-time activities."

Unlike with social media or print pieces - which are primarily used to simply disseminate information in a clear and easily digestible manner - television demands some level of entertainment. Part of that depends on the creativity and skills of the program's producers, but much of the entertainment value is driven by the on-air talent, which by default will often be parks and rec staff members.

Harris concedes he's no Leno or Letterman, but he says most parks and rec directors will have a kind of instinctive ability when put in front of the camera. "It is part of our job to get out there and promote our city and our department," he says. "It's natural to get some nerves, but if you know your product and you have a passion for what you do, that comes across on TV. You're believable."

South St. Paul's parks and rec show regularly goes on location to various facilities to profile the department's programs and people. Esser says that over the years, virtually everyone on the department's staff - as well as other city employees, program affiliates, private vendors, parks commissioners and even interns - have found themselves in the spotlight. Although the show features a talented and charismatic host and is supported by an experienced and national award-winning production crew, Esser says there is always a touch of stage fright, even when interview questions are scripted well in advance.

"It can be nerve-wracking," Esser says of the filming process. "You don't want to stumble and you want to make sure you have all your facts straight. Not all of us have a great comfort level in front of the camera, but just about everyone here has risen to the challenge and has ended up being a pretty good interview."

An often unforeseen advantage inherent to creating promotional shows is that the process encourages parks and rec agencies to critically reexamine their services. "It can force you to come up with fresh ideas," says Esser, referring to the show's content, as well as the parks and rec programs and facilities that the content reflects. "This economy is making that challenging. Budgets are shrinking, but the expectations to create new and affordable programs remain, while at the same time giving your traditional programs the level of quality they deserve."

But if a department finds it must cut some programs or even shutter facilities - as Hamilton's has been occasionally forced to do in recent years - Harris believes shows such as "Hamilton Happenings" can help narrow an important gap that continuously exists between residents and their municipal service providers. "I don't think a lot of people fully understand the role that parks and recreation plays in their community," he says. "The show gives us another way to promote everything we touch."