Ozone Finding Its Place Within the On-Premise Laundry Industry

When finding comparisons to ozone's place within the on-premise laundry market, look no further than the chemical's place within the aquatics market, where it has been used as an effective disinfecting alternative to chlorine and other sanitizers for the better part of a century. 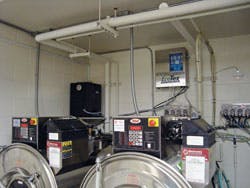 When finding comparisons to ozone's place within the on-premise laundry market, look no further than the chemical's place within the aquatics market, where it has been used as an effective disinfecting alternative to chlorine and other sanitizers for the better part of a century.

"We've come a long way in the pool and spa market with ozone use, and it's really started to come into its own in the past 30 years," says Marc DeBrum, assistant sales manager and applications engineer for San Luis Obispo, Calif.-based ozone systems provider ClearWater Tech, who adds that ozone has been used to disinfect all the Summer Olympics pools since making its Games debut in Atlanta in 1996. "That said, the number of pools worldwide using ozone is still just about 1.5 to 2 percent."

Compare ozone's 80 years in the commercial aquatics market to its mere 25 years in the laundry market, says DeBrum, and it stands to reason that, "ozone is still somewhat in an infancy stage with on-premise laundry."

By all accounts, ozone as a laundry chemical has suffered from painstakingly slow growth. But few people will dispute its effectiveness as a powerful sanitizer and disinfectant that has the potential to save laundry facility operators both time and money. In fact, ozone providers are happy to point to any number of both sponsored and independent reports and case studies that outline ozone's many tangible benefits related to wash quality and efficiency.

For starters, unlike many traditional and time-tested chemical sanitizers that require a high temperature variable, ozone can disinfect in cold water, allowing for tremendous cost savings. A powerful oxidizing agent, ozone has demonstrated a natural ability to significantly reduce the amounts of other chemicals - such as detergents, bleaches, sours, softeners, alkili and pH increasers - used in most commercial laundries. When programmed properly, in concert with the washing equipment and other chemicals, ozone systems can also reduce water consumption and total wash time. On top of all this, ozone has demonstrated the ability to yield optimal wash quality, while extending the life cycles of linens.

These benefits have been selling points for ozone systems manufacturers, who all tend to boast a similar timeframe for returns on investment in ozone-generation equipment: 12 to 18 months.

So, what's the catch? That's the question DeBrum says he hears too often when pitching his products to potential clients. "Ignorance may be too strong a word," says DeBrum, "but there has been an unwillingness by a lot of people to jump in with both feet and try to gain an understanding of what ozone is and what it can do."

Some of the ozone community's growing pains in the commercial laundry industry seem to be self-inflicted. Mark Moore, president of ozone systems manufacturer ArtiClean, says many early providers were using technology for ozone generation, distribution and safety that may have been rushed to the marketplace. "The technology just wasn't there," Moore says. "A lot of people lost money on systems that they couldn't even get to work. You would see these small companies that just had one or two employees. They might sell a system in San Francisco, be in Boston the next day installing another one. The system in San Francisco would break or have some issue, and there would be no way to fix it."

As the technology surrounding ozone has evolved, so too have the distribution networks, making sales, operation and service of ozone-generation equipment produced by reputable manufacturers as reliable as it would be for any major equipment found in a typical laundry room. However, says Moore, some of ozone's early troubles gave it a "black eye" that has taken some time to heal.

Being a relatively new alternative in laundry disinfection and sanitization, ozone has also had some trouble reconciling with the work of certain regulatory agencies, which for decades have written codes that have reflected more traditional laundry practices. For example, a state health code may require that water used to wash hospital linens be heated to at least 140 degrees Fahrenheit to properly activate the laundry detergent. Such a regulation essentially renders one of ozone's main sales pitches - that it is completely effective in cooler water - useless.

Ozone's progress has also been hampered by some amount of infighting within the laundry industry at large. Since it can significantly reduce the numbers and amounts of chemicals used in a given wash, ozone naturally presents a threat to chemical manufacturers and suppliers. The fact that the latter party is most often the one responsible for setting wash cycles and administering chemicals for most large on-premise laundry operations has only made ozone's introduction to the marketplace more difficult.

Jack Reiff, president of ozone systems supplier Wet-Tech, points as far back as 1990, when a Morgan Stanley report prepared for a major chemical company suggested that ozone in laundry - then truly in its infancy - could lead to a 30 percent decrease in chemical usage. "So the chemical companies started bad-mouthing ozone, and they were the ones who had the ears of most of the laundries," Reiff says. "I can understand their perspective. They don't want to lose 30 percent of their business. Just think about a tunnel washer in a healthcare facility that might go through a few hundred dollars worth of chemicals every day. Thirty percent of that is a big chunk of money."

It also didn't help that some of the manufacturers early on in the ozone movement came out swinging with claims that their products could kill the need for other chemicals altogether. "Ozone is still considered by a lot of chemical people to be new," says Moore. "Every chemical supplier has his or her own agenda or way of thinking. Many of them still think ozone is going to cut way into their chemical business, but in most cases, it really doesn't."

As DeBrum explains, despite the claims of some of those early manufacturers, "Ozone is not necessarily a cure-all if you want to maximize your wash quality. You're still usually going to want a detergent to create the suds to pull the soil away from the linen; you might want some pH or alkili increase to help open the linen fibers up a bit more; and if you're going after bleachable stains, you're probably going to want to use an additional bleaching agent." As an oxidizer, ozone is also a bleaching agent, but the low doses used at most on-premise laundries to mitigate the risk of potentially harmful off-gassing don't ideally suit it as a bleaching agent for all linen types. However, DeBrum points out that ozone can replace bleach that's being used purely for disinfection, rather than stain removal.

While estimates of chemical reductions due to ozone generation will vary depending on the requirements of a given laundry operation and which manufacturer you talk to, DeBrum, for one, says a typical laundry can save 10 to 20 percent, with 25 percent possible on the very high side.

Although it may seem counterintuitive, some chemical suppliers welcome ozone with open arms. "There are some guys out there who get it - they can see ozone as a positive, rather than a negative," DeBrum says. "One of our best distributors here in California is a chemical guy. He sells the product at our retail cost to the end user. Sure, he might be cutting into his chemical sales by 10 or 15 percent, but he's getting the benefit of taking over all the aspects of that customer's laundry. He can say to them, 'I am going to get savings for you on chemicals, on your staff time, on your electricity usage and on your linen wear.'"

This way of thinking has become more popular as facility operators have tried to adhere to green principles, especially when those principles lead to operational savings. "The owner of a facility may want to be more green or save more money or whatever," DeBrum says. "If the laundry guy is on board and chooses ozone, he might lose that 10 percent of his business. If he's not on board, he might lose 100 percent."

Other chemical suppliers may welcome ozone into the industry simply because they may charge the facility a flat monthly or weekly fee that covers all service aspects of the laundry operation, including whatever chemicals might be used. "For the chemical guys in that situation, they may say, 'Cut my chemicals? That's great. I'm still charging the same amount, but I'm cutting down on my chemicals,'" says DeBrum. "It's the guys who are charging for chemicals per pound or per bucket that usually take it a little harder."

In many of today's applications of ozone in laundry, especially in team laundries, the relationship between ozone and more traditional wash chemicals can even be characterized as congenial. Methicillin-resistant staphylococcus aureus (MRSA) - a bacterial infection that resists traditional antibiotics and has led to numerous hospitalizations and even rare instances of death in athletics, recreation and fitness environments - has caused many facility operators to step up their preventive efforts by using ozone as a supplement to disinfection.

Although there seems to be little scientific data on how different concentrations of ozone and ozone-generation methods interact with other chemicals in the traditionally warm wash environment, DeBrum and Moore both say the anecdotal evidence suggests that ozone actually augments a traditional wash's effectiveness, especially regarding disinfection and sanitization. "MRSA can be easily killed by ozone," Moore says. "We recently put a system in the Los Angeles Lakers' training room. It's not that they were trying to save money or doing it for the green aspect, they were just using it as an extra measure to prevent MRSA from getting to their athletes. There are facilities that are installing ozone in their laundries just as an extra disinfecting means, rather than a means to save money."

The laundry requirements of the Lakers' training room will naturally differ from those in a high school equipment room or a health club, but ozone's role within the laundry industry as a whole appears to be expanding - however modestly. "A lot of our potential customers have never even heard of ozone in laundry," DeBrum says. "Many times, you start talking about ozone, and people will look at you a little wide-eyed and say, 'Geez, this sounds a little technical. I'm not sure I'm ready to go down that road.' But some of them are."