What We've Learned in 16 Years as Club Owners

At the end of 2011, we will mark 16 years as health club owners - thank you, thank you - and the approaching anniversary has led us to reflect on our first few years in business, when we really didn't know anything. 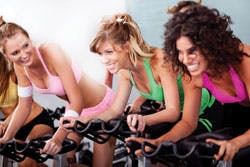 A group of members who think they can reserve bikes for their friends should be quickly discouraged. (Image Â© Get4Net/Istockphoto.com)

At the end of 2011, we will mark 16 years as health club owners - thank you, thank you - and the approaching anniversary has led us to reflect on our first few years in business, when we really didn't know anything. We thought we'd take a look back to see what lessons we learned that have stayed with us today, and that we hope might help other club owners.

When we bought what was then a small club, our dream was to open a "gym" - you know, the kind of place where guys lifted heavy weights, and if you told us your goal was to get in shape we'd say, "See that guy over there? Follow him around and do what he does." When we found an underutilized club in a growing community, it seemed like just what we had been looking for. All these years later, we can say it was. However, it turned out to be a lot different than the gym of our dreams, with things like group fitness, billing issues and traffic patterns taking a lot more of our time and energy than we'd ever imagined.

So, what else have we discovered on the road to middle age?

Monroe County, Pa., has just 160,000 people spread over more than 600 square miles. But there were fewer than 100,000 people when we arrived, and we're grateful that the growth we projected materialized. Our first location is in the geographic center of the county, and when you have so few people spread over a wide area, you need to be as close to as many of them as you can get. If you are considering opening a location in a rural community or small town, make sure you are in the center of whatever population base there is, and be the first one of your type there. You don't want to be the second general-purpose gym, the second low-priced club or the second women's-only facility when there are a limited number of potential customers available to you. If you can't be first, find another population center that's out of range of the other guys, which is what we did several years later when we opened our second location.

They'll give you 10 minutes.

Our experience confirms industry guidelines that say most people will travel only eight to 12 minutes to reach their gym. For us, that actually did not apply during our first five years, because the area's growth had not yet brought what it soon would - more traffic, more traffic lights and more competition. As the traffic got worse, our members who never cared about driving, say, 20 minutes, suddenly found themselves driving 30 minutes or more, and along the way they would pass new competitors. Our response was to both expand our main location to include something unique in our community (an indoor pool), as well as to open a second location. The goal of the expansion was to protect the radius from which people would drive to reach us, and the goal of the second location was to be first to arrive in a growing area. Many years later, the business case for each decision has been proven correct. The lesson for other club owners is to understand your travel time vulnerabilities, and then stay a step ahead of problems. Is there a road construction project in the works that will cripple traffic from a critical neighborhood? Is there an area in your community that is a prime spot for a competitor? How would you respond to such situations?

Cliques should be broken up.

When we first arrived in 1995, the "Bagel Bunch" dominated Saturday morning Step class, making newcomers feel unwelcome and bossing around the staff in their quest for coffee. It didn't take us long to realize how bad they were for business, because their goal was to keep our club the way it was - a small club that they could dominate - while our goal was to grow the business by being welcoming to new members. So we changed the Saturday morning class format, rearranged the lobby furniture and moved the coffee machine and mugs. Soon, the Bagel Bunch was gone and Saturday morning classes saw a huge increase in attendance. Since then, we have always been well served by breaking up cliques. A small group of people can be dangerous to your business if they think their rights and privileges supersede the rights and privileges of other members.

Members are not friends.

In the late '90s, one of our members owned a local restaurant and bar where we and our staff and other members often congregated. We thought that the easy camaraderie we experienced there would carry over to the club, but we quickly learned otherwise. On one occasion, the daughter of a member who had hung out with us had a billing problem and, though we and our staff handled it sensitively, the mom completely freaked out ("You know how much money my husband and I spend here?!") and the whole family quit soon thereafter. We thought we'd get the benefit of the doubt from someone with whom we had friendly after-hours dealings, but as soon as we reached into her pocket for money she did not want to pay, she reacted worse than any "regular" member. Lesson learned: Members aren't friends, and we've never mistaken one for the other again.

Our lead time for cancellations was initially 30 days, but we quickly reduced it to 14 days and have kept it that way ever since. Our state law allows 45 days. We wish more consumers called and asked, "What's your cancellation policy?" rather than "What's your price?" because the former tells you much more about a club's culture and customer-friendliness than the price, and we're pretty customer friendly. We used to be so friendly that our only membership option was month-to-month billing. That changed in response to the recession, when we kept prices flat in return for a one-year commitment, but we still provide a reasonably priced month-to-month option. We sometimes wonder how much money we left on the table by not just having a one-year option for all those years, but we like where we are today and how we got here.

Know who you are.

One of the earliest and most important things we learned was to stay laser-focused on who we are. For example, in year two or three, we increased prices for college students, which was considered heresy at the time. But we didn't cater to students and, actually, we didn't want them. Similarly, as our prices have slowly gone up over the years, we've lost some members who simply want a cheap place to lift and don't need or care about the additional amenities and higher level of service that we try to provide. That's okay with us; we don't want to be everything to everyone. We try to consistently and accurately reflect our culture in our hires, the ads we run and our vendor relationships. Good or bad - and we hope it's good - we are who we are.

Sometimes, we miss those early years. With just one small club, fewer life responsibilities and the energy that comes in one's 20s, we used to close down the club and work out well into the night or hit the local all-night diner for a late meal. We were growing and learning, and transformed the business in year three by buying our real estate and opening a corporate location. Not long after that, we started planning for our expansion. The freshness of those years has transformed into what we hope is some business savvy, maturity and perspective, but we still sometimes wonder about that lifters gym where you'd follow the big guy around to get in shape. That may have been the easier approach at the time, but it wouldn't have been nearly as educational.