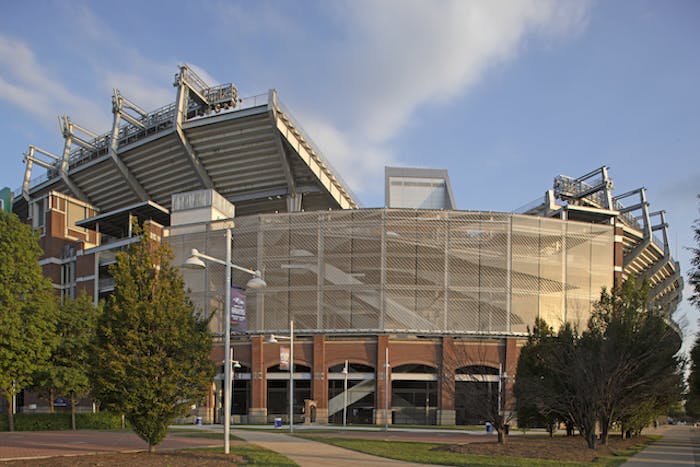 Woven by Cambridge craftsmen on Maryland’s Eastern Shore, the durable stainless mesh panels also provide airflow, comfort from the elements and views of downtown for guests accessing the stadium’s upper levels via pedestrian ramps and a new set of escalators.

Etching is a common technique used by Cambridge to create visual elements and branding.

“The mesh would be beautiful on its own, but the Ravens created a distinct public art asset by having Cambridge Architectural etch 32 panels of their Mid-Balance mesh with a timeless design that celebrates the team and the City of Baltimore,” said Tyler Robertson, AIA, Populous Architect/Associate Principal overseeing the stadium renovations. “The wing design changes the density of the etched mesh to create interest when approaching from the north and also from great distances on the skyline.”

Details within the wing pattern are found throughout many M & T Bank Stadium upgrades in both public and premium spaces through coordination with Gilbane Building Company, the project’s general contractor. The etched mesh, according to Robertson, creates design continuity and is the largest and most visible of the stadium’s wing presentations.

The etching process darkens the polished stainless steel with a matte finish.

“Etching creates a subtle, but noticeable change in metal mesh’s appearance that can be used to outline images, shapes, lettering and logos,” said David Zeitlin, Cambridge Architectural’s Business Director. “This is an added value that the Ravens and other Cambridge clients such as Coca-Cola, U.S. Customs and Border Protection and the California Community College System have incorporated into mesh façade designs.”

Home to the two-time world champion Ravens, 71,000-seat M&T Bank Stadium opened in 1998 and has been a fan favorite known for high-tech amenities, state-of-the-art concourse design and ease of access.

The Ravens and their landlord – the Maryland Stadium Authority – embarked on a three-year, $144 million facility upgrade self-funded by the team to enhance the fan experience. The final phase of the renovation, completed this summer, included a revamped interior circulation ramp on the Northeast corner of the stadium and new escalator banks on the northwest corner designed to zoom fans to their seats. Both are covered by Cambridge mesh.

The use of stainless steel mesh made from regional manufactured recycling materials builds on M&T Bank Stadium’s record as the first existing outdoor professional sports facility in the United States to earn a LEED-certified “Gold” designation from the U.S. Green Building Council (USGBC).

Cambridge Architectural is an active member of USGBC.  Even the company’s manufacturing of architectural mesh – a cold forming process – generates less environmental impact than heat-treated products.