The 14-year-old founder of Hoops of Hope discusses how kids can use sports to get involved in charitable efforts. 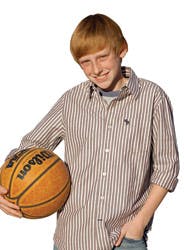 One day four years ago, Austin Gutwein decided to shoot 2,057 free throws. He made 712 of them, but it was the attempts that mattered most. For the 10-year-old from Mesa, Ariz., each heave at the basket represented an African child orphaned by AIDS during the course of one school day. Those attempts, inspired by a video sent to the Gutwein family by the humanitarian organization World Vision, raised $3,000 in pledged donations. But just as Austin's accuracy at the charity stripe has since improved (doubled, in fact), his charitable efforts - called Hoops of Hope - have grown exponentially. During one event two years ago, some 1,400 kids raised $85,000 to cover more than half the construction cost of a school in Twachiyanda, Zambia. On World AIDS Day last December, more than 5,000 shooters across the United States and in five foreign countries raised $210,000, enough to pay for a medical lab in Sinazongwe, Zambia - with money to spare. In the wake of this year's NCAA men's Final Four coverage on CBS, which featured Hoops of Hope during its championship pregame show, Austin, who turns 14 this month, granted as many as three media interviews a night. Paul Steinbach conducted one of them.

Q: What about that World Vision video motivated you to take action? A: It showed images of children crying because they had lost their parents. It talked about how these parents were dying because of AIDS, and their children were being left behind because of it. I couldn't imagine losing my parents.

Q: Where did you start? A: My dad put me in touch with World Vision, and the guy I talked to there said, "You can use your favorite sport to make a difference." The idea of using my favorite sport was awesome. It works just like a walk-a-thon, but because we're kids, we think that it's a little more fun to shoot free throws.

Q: How has the media attention affected you? A: It gets tiring, but it doesn't matter how many interviews I do or what kind of toll it takes on me. At the end of the day, I can sit back and say, "Wow, those people are going to go out and tell my story, and a lot more kids are going to be involved in Hoops of Hope." It's rewarding to know that things are going to happen.

Q: Have organized basketball teams taken up your cause? A: We encourage that, and what often happens is a school's basketball team chooses to do this and then invites the entire school to do it, too. Teams can go to hoopsofhope.org and click on the "Get Involved" button, and then we send them all the things they need to host their own Hoops of Hope event. Now that this effort has grown, I'm excited and encouraged that kids are realizing that they can make a difference.

Q: What was it like for you to be in Twachiyanda for the school dedication? A: It was amazing. These kids were so happy with so little. It was an experience that I won't forget.