One on One: Sports Agent John Phillips Tackles Corruption

The sports-agent profession is spiraling out of control. 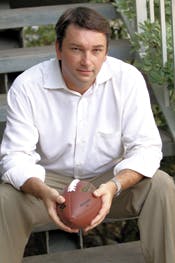 John Phillips is a 10-year trial lawyer and a rookie sports agent, having just secured certification through the NFL Players Association last October. Now he's trying to change the corrupt athlete-agent culture from within - not only as owner of the Breakthrough Sports Agency, but by authoring a law review article that looks at how his profession has spiraled out of control to the point where in May several agents and more than a dozen underclassmen college football players flaunted the rules by partying together in South Beach, Fla. "Within the past six months, the NCAA's quote-unquote witch hunt has transferred from coaches and boosters to agents," he told Paul Steinbach, who asked Phillips to comment on a profession in which $20 and a filled-out application form can get you nearly unregulated access to the amateur talent pool.

Q: What was your reaction to Alabama coach Nick Saban likening agents to pimps?
A: You can go after Saban all you want, but the fact is what he said - hyperbole or not - is true. Fifty percent of the guys in our business will do anything to get a player and always have. That's the problem. And for Saban to say, "Look, NFL, if you don't handle this, we're not going to let you on our campus," well, that's as big a shot across the bow as I've seen in sports in years.

Q: Is the NFLPA doing enough to rein in rogue agents?
A: The NFLPA has attempted to strengthen its requirements. They're trying to make it harder for would-be agents to get in, which seemingly is only making it more competitive. If you don't have a client on a 53-man roster in three seasons, you're out. So you've spent money recruiting guys over three years, and the next thing you know you're in for $100,000 and you still don't have a client. It becomes a measure of risk versus reward. Am I going to get caught and what's going to happen to me? In all probability, no and nothing. And what's the reward? Well, if you get a first-rounder, you get a six-figure pop. There's motivation to cheat. Even though it's not a law-making entity, the NFLPA needs to regulate more and have swifter punishment. There needs to be a federal registration or licensing system such that, if you're rogue and you're a cheater, you know what's coming and when it's coming. As it stands, there's really no fear of retribution.

Q: How about the campus side of this equation?
A: Compliance departments are slowly implementing agent approval forms. If you're doing it all the right way - you're approved by the state, you're approved by the school, you've gotten compliance's blessing - you can walk in the front door and make an introduction. But it takes a long time, and by that time some of your seedy competitors have already come in and, through runners and dirty networking, stolen your clients. Still, for schools to know and be comfortable with who's representing their players is healthy, because it shows the NCAA that the schools are taking assertive measures to make sure they're getting their guys in the right hands. There are some fantastic agents out there. It's going to take a clean, fresh look at what we all can do to see that the good eggs get rewarded and the bad ones get cracked.