Among the reforms approved Oct. 27 by the NCAA's Division I Board of Directors, two address longstanding concerns regarding the welfare of student-athletes receiving full scholarships. 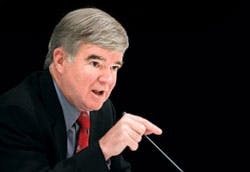 Among the reforms approved Oct. 27 by the NCAA's Division I Board of Directors, two address longstanding concerns regarding the welfare of student-athletes receiving full scholarships. Under the new measures, schools will have the option of supplementing full athletic scholarships with additional aid up to the institution's calculated total cost of attendance or $2,000, whichever is less. In addition, schools will have the option of awarding scholarships covering multiple years of a student-athlete's eligibility. NCAA president Mark Emmert called the measures "historic," and those who have long advocated for such student-athlete protections tend to agree.

"I think the historic label is fairly accurate in some sense, because the idea of a multiyear scholarship goes back almost 40 years," says Kutztown University psychology professor Jason Lanter, referring to the NCAA's 1973 switch to renewable single-year grants in aid. The multiyear scholarship has been among the founding planks of The Drake Group, of which Lanter currently serves as president, since it began advocating for academic integrity in collegiate athletics in 1999. "We focused on that because we're really concerned about the scholarship renewal policy and whether it's really focused on the athlete as a student at the university and not an athlete in the intercollegiate model," he says.

That the NCAA has returned to that train of thought represents a momentous shift, according to Lanter, who recalls previous NCAA president Myles Brand referring to TDG's 100 or so members as both "radicals and incorrigible cynics."

"Our proposals were deemed just crazy," Lanter says. "Our proposals aren't really that crazy. What a multiyear scholarship will do, provided that it's used in a way that puts academics first, is guarantee that Johnny or Susan will be there for four years, provided they maintain good academic standing, maintain good progress within their degree program and they're still part of the team. And right now, the year-to-year approach doesn't provide that; what comes first is answering to the coach."

A former UCLA football player, Ramogi Huma has been answering to student-athletes since 1997, when he first organized fellow Bruins into something that ultimately became the National College Players Association. This year, Huma drafted a letter to Emmert calling for comprehensive reform (his request for a follow-up face-to-face meeting was turned down), and he helped craft a reform petition signed by 331 student-athletes representing the football programs at Arizona, Georgia Tech, Kentucky and Purdue and the football and men's basketball programs at UCLA. Within the past two years, the NCPA pushed for laws in California and Connecticut requiring schools in those states to publish their scholarship shortfalls.

The recent awareness blitz has been driven, in part, by Huma's ability to point to the sheer amount of new television revenue flowing into the NCAA - $784 million annually above and beyond existing TV contracts, he says. "To put that in perspective, if they were going to fully fund the scholarship shortfalls at every Division I school for football and basketball, it would be about $47 million per year," he adds. "If you doubled it for Title IX, you're talking about a little more than $90 million. And we pointed out that the NCAA does this all the time. They receive the money, they take a portion for operating expenses, and they distribute the rest back to schools, a lot of which is earmarked for various things. So why in the world can't they do that now?"

As the reforms were being revealed to the public in late October, even Oregon State University president Edward Ray, who chairs the NCAA Executive Committee, acknowledged the "mega-billion, multi-year media contracts" and their influence on decision-makers, stating, "I think a lot of people legitimately worry about what does this mean for student-athletes and are we really appropriately focused on them."

While cautiously optimistic that the NCAA is at least moving in the right direction, Huma argues that $2,000 still doesn't adequately cover most student-athletes' expenses in the FBS conferences, where - according to a recent research collaboration between the NCPA and Drexel University sports management professor Ellen Staurowsky - the average scholarship shortfall is $3,222. Only about 20 FBS schools will be able to fully meet the financial needs of their student-athletes, Huma says, while as many as 100 schools will come up short, some by as much as $4,000 - even after the extra $2,000 is applied. "The NCAA has not explained where the $2,000 figure came from," says Huma, who suspects it represents a comfortable public-relations position between something appearing meager and something approaching pay for play. "That's the balance. There's no calculation out there based on any data or facts surrounding this whole issue. Where is the math?"

NCAA spokesperson Gail Dent told AB via e-mail that the $2,000 amount was "a middle-ground figure that our Board of Directors felt comfortable with as a starting point." According to NCAA.org, "The figure will be adjusted according to the consumer price index, so the presidents will not need to approve new figures when the cost of living changes. The Board resolved to not revisit the $2,000 amount for three years."

The NCAA's "gesture," as Staurowsky calls it, not only falls short of fixing the full-ride myth, it doesn't come close to compensating student-athletes for what they are truly worth as "the key contributors to the spectacle of college sport," even in those cases in which the cost of attendance is fully covered. Applying revenue-sharing formulas from the NFL and NBA to FBS programs, she estimates the average value of an FBS football player to be $121,000 and that of a men's basketball player to be $256,000. And yet, student-athletes often struggle to feed and clothe themselves. "While the $2,000 represents an increase, it's still modest given the rise in costs associated with going to school," Staurowsky says. "Also, keep in mind who this money is going to. A football player playing on the line for Alabama and weighing in at roughly 300 pounds is not likely going to be buying clothes off the rack. Shoes alone are going to be extremely expensive."

The fact that both welfare measures are optional is of little concern. It took less than a week for certain conferences to get on the adoption bandwagon. The Sun Belt's presidents and chancellors backed both the scholarship supplements and the multiyear scholarships, while the Atlantic 10 approved the scholarship supplements in men's and women's basketball, while allowing member schools to make the call in other sports. "When coaches make this offer," says Lanter, referring to the multiyear scholarship, "they can really say, 'We are dedicated to our athletes as students. We provide a multiyear commitment.' And then that can be used against other schools in terms of recruiting."

Huma is amazed that coaches seemingly haven't been using scholarship-shortfall disparity among schools as a recruiting wedge all along. "Now they're going to be on to it more," he says. "Had they been recruiting on this the whole time, we might have seen something change earlier, but this is another opportunity to point it out. It's a competitive advantage for schools."

Didn't this year's extra-benefits scandals involving high-profile programs at the likes of Ohio State and Miami open coaches' eyes? "I think many coaches realize that their players are financially desperate in a lot of ways," Huma says. "We saw Steve Spurrier circulate that letter among SEC coaches saying, 'Hey, we'll pay them right out of our pocket if you let us.' That was very respectable and commendable, but I don't think coaches knew that players' scholarships are designed to fall short of basic necessities."

Aid disparities - and recruiting advantages - will continue to exist, given the NCAA's $2,000 limit, and therefore Huma's battle continues. "The only way to eliminate that kind of advantage is to increase the cap equal to the cost of attendance," he says. "If you let schools choose to fill it, then they can determine on their own whether or not they want to compete. But right now, the NCAA is actually mandating a competitive inequity. It's not just allowing it, it's mandating it."

Lanter, too, will be looking to the future with ever-sharp focus. He issued a position statement Oct. 31 titled, "The Drake Group Applauds the NCAA's Approval of Multi-year Scholarships." When asked if TDG, in which Lanter has been involved since 2000, had ever applauded the NCAA for anything, he says, "It may officially be a first, but I think they do need to be applauded for proposing this idea and really pushing it through. It's something we've discussed for years, so we wanted to say, 'Thank you. We commend you.' And now let's look at the details to make sure it's enacted in a way that really serves the best educational interests of the athletes."