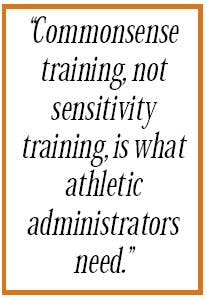 High school athletic directors call it "the kind of thing that can destroy a school" and "probably the worst nightmare for an athletic administrator." Legal experts call it "dangerous litigation." And an official at the National Federation of State High School Associations calls it a much more difficult thing to deal with than, say, a Title IX complaint. "A Title IX complaint," says Tim Flannery, an assistant director with the National Federation, "does not ruin lives and reputations."

But a sexual harassment allegation - usually brought by a female student-athlete against a male coach - can and does, even if the charges are eventually proven to be unfounded. "Society is still of the opinion that when you are accused of improper relations with a minor, you're pretty much done," says Lowell Gratigny, head of litigation for sports at American Specialty Insurance, a Roanoke, Ind.-based risk-management insurance provider for the National Federation and other professional and amateur athletic associations. "You don't walk away very easily from this stuff."

Regardless of whether they are found guilty or acquitted of the charges, coaches (and physical education teachers) often lose their school jobs and move into other lines of work, Gratigny says. And in cases in which the allegations prove to be true, schools can be sued for wrongful hiring practices. Many offenders are repeaters, Gratigny adds, who simply were not reported in previous jobs or struck a deal that buried a past incident.

While Gratigny and other observers say that the number of sexual harassment cases in litigation related to high school athletics is higher than ever, the increase in the number of actual incidents may not be as dramatic. Rather, parents and their children have become less afraid to speak out and make allegations, says Lee Green, an attorney and sports-law professor at Baker University. Green also developed the curriculum for the National Federation's new legal issues course for athletic directors about sexual harassment, Title IX and the Americans with Disabilities Act.

"Commonsense training, not sensitivity training, is what athletic administrators need," he says. "Athletic directors have to be involved in what's going on with their coaches and student-athletes. This should be a priority. Sometimes all it takes is just making sure the lines of communication are open."

The term "sexual harassment," at its most basic definition, means unwelcome words or actions of a sexual nature directed toward an individual that result in harm to that individual. In the realm of high school athletics, that could mean outright sexual intercourse between a coach and a student-athlete; a male coach hugging female players after a game or putting an arm around a player's waist to correct her position during practice; a coach using sexually explicit or derogatory language; or a coach discussing his or her personal life and inquiring about the lives of his or her players. Green cites case after case in which both male and female athletic personnel allegedly have committed egregious errors in judgment and breaches of trust. For example, one male coach of a girls' softball team affixed pictures of nude women to the wall of the locker room to motivate his players during cardiovascular and weight workouts to get in the same shape as the models.

Some instances fall into what Green refers to as a "gray area" separating misconduct from proper conduct. "That's what's so tough about this whole issue," he says. "People's perceptions of what's offensive are so different. The best advice is to try to take things out of the picture that could even remotely be misinterpreted, and think about it from the other person's perspective."

To that end, Green and the National Federation have developed 10 recommendations for preventing sexual harassment in schools and athletics programs, which can be found on-line at www.sportslawpublishing.com. Among the behaviors for coaches and athletic administrators to avoid are sexually explicit language and jokes in the presence of student-athletes, the display of pornographic materials on school property, engaging in excessively personal conversations with student-athletes, comments on the physical appearances of student-athletes and physical contact with student-athletes. Some of these may seem a little extreme, Green says, but if you follow these guidelines, "there's really no way an allegation can credibly be made," he says. "And none of these should really hinder a coach or athletic director from doing his or her job."

Many school districts that have males coaching females already try to make the job easier by requiring that another female - a parent, a former student, a faculty member - be part of the coaching staff, Flannery says. Doing so helps provide adequate locker room supervision, avoids uncomfortable situations on overnight trips and usually takes a little psychological pressure off the male coach.

The Women's Sports Foundation (www.womenssportsfoundation.org) also has weighed in with a policy statement regarding sexual harassment and sexual relationships between coaches and athletes, which includes guidelines for both student-athletes and administrators responsible for hiring and supervising coaches. WSF also publishes an educational resource kit to help administrators improve their own school's sexual harassment policies - policies required by Title IX.

"There is no reason for anyone to speak or act in a way that could be implied as sexual harassment today, with the educational opportunities that are out there," says Sister Lynn Winsor, athletic director and vice president for activities at Xavier College Preparatory, a Catholic all-girls school in Phoenix. "I can't imagine an athletic administrator not educating his or her coaches about that. And if you're a really good athletic administrator, you'll be out there watching what's going on."

Winsor brings up hypothetical situations involving sexual harassment when she interviews potential coaches, and she has final say in who head coaches hire as assistants. At Xavier, 21 of the school's 48 coaches are males. "Being an all-girls school, we have a focus on women's issues," she says, adding that the private school is not required to follow Title IX mandates. "I don't ever remember any problems with harassment. The student-athletes and coaches have a healthy respect for each other, which is the key."

Another key, Green says, is making sure student-athletes recognize sexual harassment when it happens and know what to do about it. "It's tougher to educate kids than it is adults," Green says. "Part of the challenge of reporting an incident is the procedure itself. You can't have student-athletes reporting to their own coaches or ADs - someone with a conflict of interest." That's why many schools designate someone in the building to whom student-athletes can report any inappropriate behavior - an administrator, the school nurse, a guidance counselor or the district's Title IX coordinator (a person required by federal law to spearhead a public school district's Title IX compliance efforts).

Another obstacle when dealing with reported incidents is the fact that the accuser and the accused usually must continue working together in a team environment - which is not the case in a corporate sexual harassment suit, Green notes. Plus, school administrators must be on the lookout not only for harassment between male coaches and female student-athletes. Green says a handful (no more than 10 percent) of allegations stem from same-sex incidents or inappropriate female behavior toward male student-athletes.

In rare cases, athletic personnel are "set up" by student-athletes with scores to settle, Green says. A larger number of sexual harassment allegations stem from what could be perceived as misunderstandings between coaches and student-athletes.

Still, when you consider that roughly 1 million coaches oversee more than 6.5 million high school student-athletes, the percentage of reported sexual harassment incidents remains small. But that's not enough for Green. "Because sexual harassment is more of an intentional behavior, the small amount of cases out there is still too many."