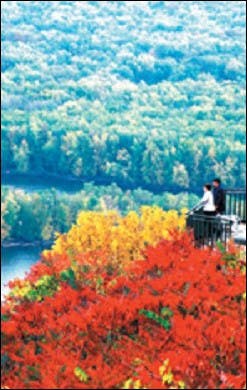 When Mark Slatterley began working at the Iowa Department of Natural Resources in 1986, it operated on an annual budget of $11.5 million. Fifteen years later - despite the gradual increase in labor, equipment, fuel and utilities costs - the amount of general funding for Slatterley's department remains the same.

To make matters worse, Iowa's DNR - which manages approximately 80 state parks and recreation areas - learned in July of a crippling $500,000 cut in operational funding for the 2002 fiscal year. While more prestigious programs have received the bulk of the state Legislature's attention, DNR interests remain (as Slatterley, chief of the DNR's budget and grants bureau, says) "at the bottom of the barrel."

As a result, the Iowa DNR has had to significantly reduce spending for essential programs, purchases and maintenance. To cite one example, the department didn't hire its traditional summer help - an estimated 70 employees - saving about $357,000 in operational costs. But the move was not without consequences. "As a result of that, we closed some areas within 55 different state parks," says Ross Harrison, chief of the information and education bureau for the DNR. "We did not mow, we did not maintain. Rest rooms were shut, parking lots were closed. That's hurt us, and of course, it hurts the communities."

According to Arnie Sohn, chief of the DNR's program administration bureau, Iowa is not alone in this battle. "Most states are feeling very much the same pinch that we are, with a few exceptions," he says. Sohn, who in September attended the National Association of State Park Directors Conference in Nashville, Tenn., says the state parks and recreation departments struggling to make ends meet are ones that heavily depend on general funding from their state legislatures.

Iowa depends on general funding for approximately 60 percent of its operational budget (license and park user fees account for only 30 percent of DNR revenue). Texas Parks and Wildlife, on the other hand, brings in nearly 50 percent of its revenue, mainly from hunting and fishing licenses and park user fees. Texas P&W operates on an annual budget of $244.8 million, $197.8 million of which is earmarked for operating costs. However, Texas P&W to o has had to "cut out a lot of purchases of equipment and vehicles," according to Suzy Whittenton, chief financial officer for the department. "We're also doing some delayed hiring tactics and even keeping some positions vacant for most of the year, just to make the numbers work." Whittenton adds that many of Texas P&W's older park areas "are in bad need of repair," but with only $5.2 million of this year's budget available for capital projects, repairs and maintenance, those dilapidated areas will remain that way unless the department receives alternative funding.

The Recreation Infrastructure Grant typically made $3 million a year available to cities, counties, organizations and associations that desired to make structural improvements to existing recreation facilities. The grant was structured to provide a one-third funding match, while grant recipients were responsible for coming up with the remaining two thirds, half of which could be "soft match," or donated materials. According to Sohn, this program was very popular with Iowans, serving as an inspiration for local cities or counties hoping to rejuvenate older recreation areas. However, it recently disappeared. "This year it was in the budget up until the last day or two of the legislative session. Then at one point, it left the table," says Sohn. "I don't know who, what, when, where and why - other than that there were tight budgets all around, and somewhere in the course of making those final decisions, it was cut."

An immediate goal of Jeffrey Vonk, director of the Iowa DNR, is to make the Iowa Legislature more aware of his department's needs. "Our goal is to have a dialogue with the Legislature about the cuts and the impacts of decisions that were made - right and wrong. We would like to work with them to try to restore to some extent what was lost."

Yet, Harrison believes that in order for the DNR to improve its position with the state Legislature, the department must first seek the assistance of Iowa citizens. Because all of Iowa's state parks are within 25 miles of a town or city, Harrison says that the DNR should do more to make parks recognized as an important part of the local community. "It's one of those things where we need to do a better job of making Iowans support their state park system. But you know that gets into lobbying, and we've got to be careful, because we can't do that. I just think we need more of our park managers out in the field - developing our parks as part of a community effort - so at least we have 80 communities out there really supporting their local state park."

While there are "Friends of the Park" groups that publicly support individual park areas and volunteer to help with their upkeep, Harrison says the entire effort is not organized enough to present a strong voice to the Legislature.

Texas P&W officials are likewise trying to coordinate public support for the parks system in their state. "We're always trying to interact with the customers who we serve," says Dr. Bruce Macchiaverna, Texas P&W's director of finance for the parks division. "In fact, we have a very large issue coming up in the election that would help substantially with our capital projects and maintenance and repair programs. So there's a whole lot of information dissemination to our patrons and the general public about what exactly this bond issue would mean for state parks."

The "very large" issue Macchiaverna speaks of is a bond proposal titled Proposition 8, which was set to go before Texas voters on November 6. Proposition 8 would approve the issuance of $850 million in bonds to 13 different state agencies for general repair and equipment purchase. Texas P&W would receive $101.5 million over the next six years, with an initial disbursement of $36.7 million for the 2003 fiscal year.

If Iowa DNR officials had such a bond vote to look forward to, perhaps their financial outlook would be more optimistic. Currently, their only hope for monetary relief is from the federal government, either through the Conservation and Reinvestment Act (CARA) or the Land and Water Conservation Fund (LWCF). CARA was originally intended to fund $3 billion a year toward a multitude of federal and state natural resource programs, including LWCF. The bill almost passed last year, but died before it reached the Senate. (See "Fight for Funds," May, p. 36.)

LWCF is authorized to devote up to $900 million ($450 million of which is given to the states) for the development of wilderness, open space and parks and recreation areas. Sohn says he last heard that Congress was proposing to give $154 million to state conservation interests, which would net Iowa about $2 million. But in light of recent congressional approval of billions of dollars for national security interests, he is doubtful Congress will appropriate any funds for parks and recreation. "I don't know if something like Land and Water is small enough to just pass on through, or if it's something that they'll decide not to spend money on at this time," Sohn says.

Faced with few options, Vonk and other department officials are hesitant to increase park fees to make up for lost funding. "We want to make sure we have an affordable opportunity for folks, as well," says Vonk. "It's a balancing act to provide all the services and keep them affordable for all the folks of Iowa."

However, Vonk realizes that because of his state's stark "budget realities," convincing the Legislature to send more funds the DNR's way will be a difficult task. "Internally, we're going to have to face up to the reality that there's not a strong likelihood that additional funds will be provided."

Meanwhile, the Iowa DNR staff trudges along. Says Slatterley, "I don't think morale is real high, but that is normal in the case of a financial downturn. I think, as we've done in the past, everyone will do what they can do to keep things rolling."