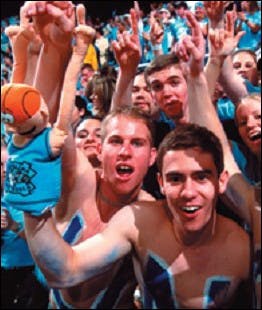 It was with only the best of intentions that University of North Dakota athletics officials solicited the opinions of student leaders prior to the start of this season as to where they and their peers would like to be seated in the school's opulent new hockey facility, Ralph Engelstad Arena.

"We met with student senators and the president and vice president of the student body and said, 'We want to put the students in some prime areas. Where would you guys like to be?' And to a person they said, 'We want to be at center ice,' " recalls Paul Collins, UND associate athletic director. "We found out after the fact that the general student body would rather have been in the corners."

That's because most UND student ticket holders prefer not to be seated at all, opting instead to show support by remaining on their feet through entire games - a long-standing practice established at the Fighting Sioux's previous home, the original Engelstad Arena. However, that facility held only 6,000 spectators, a full third of whom were students occupying one side of the rink from corner to corner, top to bottom.

Trouble arose this season as quickly as the home schedule opened with eight consecutive home games, including seven in the new arena - the one with 11,400 seats spread out between two seating levels and a ring of 48 luxury suites. Of the 2,200 seats allotted students at the current venue, 1,000 are as good as hockey tickets get: lower bowl, behind the penalty boxes. But that location also situates students between sections of Sioux boosters, each having donated $1,000 or more for the right to purchase their $16.50-per-game tickets, as well as in front of occupants of several $25,000-per-season suites. Not surprisingly, the latter two groups of fans found it frustrating when their sight lines were obstructed by students who refused to sit down. Words were exchanged. More open forums between athletics officials and students followed. It wasn't long before the student body divided into two vocal factions - those willing to actually sit in their choice seats (lest they lose them) and those who continued to stand.

All of this resulting from the athletic department's desire to provide students - paying admission to attend UND home hockey games for the first time in school history - with the best seats in the house. "We really wanted to do that for them," says Paula Sondreal, ticket manager for UND athletics. "However, we didn't foresee what would happen after that. You live and learn, I guess."

Seating student ticket holders at athletic events may entail considerations both obvious and unforeseen. As it turned out, North Dakota was victimized by its own tradition, one that didn't readily transfer from one facility to the next. "One of our issues is trying to get the students to understand that there's a difference between the old and new buildings," Collins says. "Some come in with blinders on: 'I stood in the old building; I should be allowed to stand in the new building.' Architecturally, it's not designed for them to be able to stand."

A stopgap measure instituted earlier this season involves scaling back single game student ticket sales slightly and roping off three rows of $5 seats at the top of the prime student sections. The ultimate solution for next season may look similar, but that's where the corners come into play. By locating students in these wedge-shaped sections, less of the rink's surface area will be blocked for fans seated in sections flanking the students. In addition, rows left open behind the students will ensure suite holders an unobstructed view of the ice.

No such measures should be necessary next season at the University of Maryland, where Terrapin basketball teams will begin play in brand-new Comcast Center. The 17,100-seat arena will accommodate 2,500 students in the first 10 rows encircling the court, but UM athletics officials don't foresee students actually using their chair-back seats. "Our students will not sit down," says Deborah Yow, Maryland's athletic director. "We knew that, and we planned for that. We built in a 4-foot riser, so if you're the first patron sitting in the first seat behind the students, you'll be able to see - even if the they stand the entire game." Another 1,500 students will comprise an entire section of seats banking straight up from one of the court's baselines. But that section won't create obstructed-view problems, either, Yow says, "because it's all students anyway."

Officials at the University of North Carolina have taken a different tack with their basketball facility, the Dean Smith Center, where portable tiered platforms have been conceived and constructed as "standing room only" for roughly 400 students each game. The idea emerged not at the blueprint stage (the Smith Center opened in 1986), but rather following a freak act of nature during the 1999-2000 season. A snowstorm severely curtailed attendance at a men's game against Maryland, and fans were invited to move into the best seats available. "Students were able to encircle the floor, and it created a real vibrant atmosphere for us," says Clint Gwaltney, UNC's director of ticket operations. "That led to a push by students to try to do something about getting more seats closer to the floor."

The subject was discussed during summer meetings involving an architect, students, and representatives of both the athletic department and the Educational Foundation, UNC's donor organization. The result? Seven side-by-side platforms have replaced six rows of collapsible seats behind one of the arena's baskets. "We based the design on 16 square inches per standing person," Gwaltney says. "The risers have four tiers, and students are usually two deep on each tier. They work together to make sure that everybody can see."

Meanwhile, finding replacement seating for Educational Foundation members who once occupied a section of seats in those first six rows proved to be "a semi-laborious process," admits Gwaltney, who adds, "They were forthcoming and more than willing to relocate, and we tried to find them comfortable seats elsewhere in the arena. There was a lot of give and take from our student organization, from the Educational Foundation, and from the athletic department to make sure this worked."

The only remaining drawback in using the aluminum and steel platforms comes before and after games, not during them. "It has added an hour to our setup and tear-down," says Angie Bidding, director of the Smith Center. "At 5,000 pounds each, they're not easy to put in and take out."

As for the games: Has relocating a mere 400 students out of a typical contingent of 6,000 in a 21,000-seat facility created the desired effect since the scheme's Dec. 2, 2000, debut against Kentucky? "A lot of hardcore fans really enjoy the standing, the jumping up and down on the metal and making a lot of noise," Gwaltney says. "Several of the television announcers last year expressed the opinion that they had never heard the Smith Center so loud."

Crowd noise is just one incentive to move students closer to the action. North Dakota, for example, chose not to solve its problem by simply banishing all 2,200 student ticket holders to the upper level of Engelstad Arena, mainly because to do so would be to sacrifice atmosphere. "The students are the catalysts, especially in the lower bowl, for getting the rest of the fans into it," Collins says. "They feed off of our student body."

But the creation of a home-court advantage was only part of Maryland's motivation for reserving its best Comcast seats for students, who are admitted free to games on a first-come, first-served basis. "It's more than that," Yow says. "It's not just a feel-good thing for us. We had $6 million in student fees. We have a relationship with them, and doing the right thing entered into our strategy."

Doing the right thing in this day of seat licenses and luxury suites can prove costly. Collins estimates that UND athletics turned its back on at least a quarter-million dollars in revenue over the course of this season by locating students in sections of seats it could easily have sold to donors. (A waiting list for future season tickets at Engelstad has already taken shape.) It might still happen that choice seats will open up to those willing to pay top dollar for them, but it will ultimately be up to the students to decide. "Their biggest wish is to go back to the corners and be able to stand," Collins says. "We've sat down with them at the forums and said, 'We promise we will take a very hard look at this and see if it's feasible to move you.' We've made that commitment to the students - to look at it and see if there's any possible way to make this work."