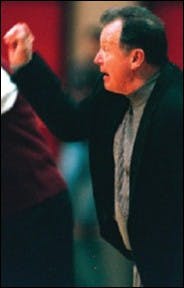 Jon Zwitt has heard the stories about high school coaches who crack under the pressure of their jobs. Burdened by long hours with low pay, unmotivated players, overzealous parents and constrained budgets, these men and women are often asked to coach more than one sport, in addition to handling a full slate of teaching responsibilities. As a result, they eventually become withdrawn from both their coaching staff and their players. Fortunately for Zwitt, athletic director at Center Grove High School in Greenwood, Ind., most of his coaches are single-sport coaches, and burnout isn't common within the school's athletic department.

But Zwitt's not taking any chances. When officials at the Center Grove Community School Corporation offered him grant money last fall to help improve the school's athletic program, Zwitt weighed his options and decided to invite Christopher Carr, a licensed sports psychologist at Methodist Sports Medicine Center in Indianapolis, to speak to about 40 coaches. Carr stressed the importance of focusing not only on Xs and Os, but also on the mental aspects of sports - listening and responding to the needs of student-athletes, better managing time and stress, and refocusing efforts to become more effective role models. To impart a similar message about the mental game to players, Zwitt also asked Carr to speak to 500 or so student-athletes at the school.

Carr works with high school coaches and players more than ever these days, stressing the value of goal-setting, teaching relaxation techniques, explaining how mental imagery and visualization enhance concentration, and introducing mental routines that increase focus, confidence and poise. "Coaches are never going to have an environment in which parents don't scream," Carr says. "But coaches can change how they cope with that stress. By providing sports psychology education to coaches, athletic directors give them tools they can use to enhance their performance, be more effective with athletes and create a better environment."

That environment is more important than ever now, as high school athletic directors nationwide continue to combat coaching shortages. But can bringing in a sports psychologist - a much-maligned profession, Carr admits - be the answer. "Whenever anybody hears the word, 'shrink,' they think, 'My God, what are we doing here?' " Zwitt says, adding that many Center Grove coaches initially were skeptical of their group session with Carr.

Indeed, psychology in general carries a societal stigma, Carr says, and sports psychology is no exception. This makes getting Carr's message across to high school athletic administrators that much more difficult. People usually associate sports psychology with professional athletes and fees upwards of $20,000, Carr says. Yet the simple fact that Tiger Woods boasts about how visualizing his swing has made him a better golfer probably helped Center Grove's student-athletes grasp Carr's concepts. "Kids hear about things like that, so it's easier for them to accept the idea when someone comes along and tries to explain its benefits to them," Zwitt says.

Paying for a licensed sports psychologist to speak with coaches and student-athletes - Carr's high school fees begin at $500 - isn't as tough as it sounds, Zwitt says. Grant money is available from some of the least likely sources, and a quick Internet search will yield a variety of practitioners, as will networking with peers at other area high schools and colleges.

Be wary, though, Carr warns. The field of sports psychology does not benefit from a common form of certification. It's therefore crucial to ask potential speakers whether they are licensed and where they received their training. "A competent sports psychologist should have no problem answering those questions," Carr says.

The mental elements of coaching will also play a key role in a new three-level coaches' education program to be offered beginning this fall by the National Federation of State High School Associations. Developed by the American Sport Education Program, the courses will feature Bronze, Silver and Gold levels of achievement. The Bronze level will cover the fundamentals of coaching, including how to develop positive coaching philosophies. Future courses will include the psychological aspects of coaching specific sports.

The program will also be geared toward helping coaches realize there's much more to their jobs than running practices, giving orders, and winning and losing. Off-the-field victories are often, in the long run, more important. "Unfortunately, coaches use their win-loss records as their badge," says Tim Flannery, the National Federation's assistant director in charge of overseeing the new program. "I think we've got to get away from that credential, because everybody can't win."

At the same time, anybody can burn out. In simple terms, burnout is the psychological and physical consequence of a coach's stress factors and coping mechanisms - or lack thereof. Signs that a coach may be experiencing some form of mental anguish include heavy mood swings, frequent illnesses, changes in diet, loss of passion for sports, and the use of drugs or alcohol. A coach also may become increasingly task-oriented, opting to immerse himself or herself in busy work to avoid social interaction.

Carr suggests that athletic directors who suspect a coach might be experiencing burnout keep a record of that coach's behaviors. Then, if an intervention-type situation arises, that information can be shared with the coach. "If you approach someone with concrete observations, out of concern for that person, you open the door to further discussion," Carr says. But a coach's response to that situation will depend on his or her relationship with the athletic director. Some coaches may be aware that they're heading toward burnout, but may not mention it because they fear being fired for not effectively handling stress. "A coach has no control over the hiring and firing," Carr says. "But he does have control over his performance and the enjoyment of the game for his athletes, so he needs to stop worrying about that other stuff."

Among Carr's other suggestions for enhancing the mental well-being of coaches are developing a support group that draws members from other high schools, colleges and universities in the area, as well as encouraging team captains and other student-athletes to express their concerns about stressed-out coaches to athletic administrators. "When coaches get together with other coaches, they have an automatic bond," says Carr, who hopes to gather a group of Indianapolis-area coaches once a month to discuss their challenges, fears and accomplishments. Meanwhile, a small student-athlete advisory board - similar to ones in place at some colleges and universities - can provide both positive and negative feedback about coaches, programs and administrators.

Step one, of course, is distinguishing whether a coach is actually burned out or simply doesn't like his or her job. Coaches often enter the ranks by default, thus fostering less-than-solid bonds with players and staff. Other coaches may not have the understanding of their families that they need to devote long hours to their profession. An unstable situation at home has a tremendous impact on a coach's mental well-being, Carr says.

Yet, the profession is fortunate to have many people devoted to sports and teens. People like Gus Hernandez, who for the past 36 years has been an athletic director, a head football coach and an assistant football coach. Hernandez, currently the assistant football coach at Grand Prairie (Texas) High School and in his mid-sixties, has worked at seven different schools - discovering in the process that he's most happy in an assistant coaching position. At Grand Prairie, Hernandez serves as both defensive line coach and the school's dropout interventionist and detention specialist, working with troubled students. "I'll be a coach for as long as I'm having an impact on young people and as long as my health is OK," he says. "If I see a kid coming down the hall toward me and he's smiling at me, that spurs me on."

Hernandez claims his attitude has helped him avoid burnout during the past three-and-a-half decades. Other coaches have not been so fortunate. But it appears help may finally be on the way in the form of the National Federation's new education program and forward-thinking athletic directors like Zwitt who realize the importance of off-the-field coaching success. "It takes a progressive athletic director and a progressive school system to create a template to offer psychological support to coaches," Carr says. "I believe these kinds of programs are the future of coaching education."