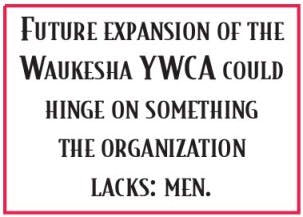 The YWCA of Waukesha, Wis., has a lot of things going for it in terms of recreational facilities. It has a lap and therapy pool in which it runs family and open swims; water safety, swimming instruction and aquatic exercise programs; and an adaptive aquatics program for individuals with disabilities. It runs a weight-control support group, a mentor program that matches individuals with disabilities with "friends" so they can participate in programs together, and a seniors club. Its health promotion programs include exercise, massage therapy, yoga, t'ai-chi, karate and personal trainer services.

But according to executive director Beverly Siligmueller, future expansion of the Y could hinge on something the organization lacks: men. This summer, at a time when the sports pages were dominated by hand-wringing over Title IX and a major battle was brewing over the men-only policy of Augusta National Golf Club, home of the Masters, the YWCA of Waukesha decided it had its own little gender problem. The national YWCA's charter stipulates that only women can sit on a Y's board of directors, which to this Y's board meant that half of the populace was being excluded from involvement in the YWCA, including the community's "old boy" network.

What the Y needed, Siligmueller decided (and the board of directors agreed), was a different kind of expansion. In late August, the board voted to create a separate YWCA foundation that would help fund the agency's general budget and build an endowment to carry the Y through economic downturns. The foundation, unlike the board, would be open to both men and women - especially men, as it is the stated intention of the foundation to recruit men who have connections to businesses and industries that can help support the agency.

"If you have men on your board, you have their connections, too," says Siligmueller, who is stepping down as the Y's executive director to become the foundation's president. "As you're trying to unlock new doors for funding, and you're trying to make new friends, it makes sense to not only have access to women and those individuals who women know. We really are a community organization - we also serve men and boys - so it makes sense to create an opportunity for men to participate."

The YWCA of Waukesha would appear to be in a position to reap significant benefits. While it is among the first YWCAs to alter its approach in this fashion, it is not the very first, and thus will be able to consult with its predecessors as it staffs its board and drafts its bylaws. It will also have at its helm a proven fund-raiser in Siligmueller, who earlier this year oversaw an emergency fund-raising venture in which $300,000 was raised to repair a collapsed ceiling and other problems that had closed the Y's natatorium for eight months.

Still, Siligmueller is expecting a challenge in reeducating the business community about the YWCA of Waukesha's areas of business. For one thing, as previously noted, the YWCA serves both genders. In addition, the YWCA - like the YMCA, which for years has appeared to stress shooting hoops over its faith-based, Young Men's Christian Association roots - suffers from the public's outdated notion of the association's mission.

While Siligmueller disagrees with the phrase "outdated notion," she concedes that the Y's marketing must catch up with the day-to-day reality of how it funds its good works.

"It is challenging to help the community understand what the YWCA does with respect to its mission," she says, "because of the confusion over us having a fitness center and aquatics programs that feed the revenue stream. That's the money that funds the Y's social service programs for women's empowerment, teen leadership and various other self-esteem issues for girls and women. The YWCA was started to help women and girls, and the fact that there are men and boys swimming in our pool - and that YWCAs have recreational facilities at all - can be confusing to people."