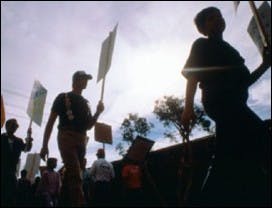 Coaching at any level is difficult. However, it is probably most difficult at the college level, where coaches not only have to be good teachers of the game, but must also ensure that their students meet all of the school's academic requirements, be good recruiters and marketers, and have an understanding of NCAA rules. In addition, unless they are coaching one of the big-revenue sports at the Division I level, college coaches are asked to work long hours for little pay, with little or no job security. In fact, since the only job security most coaches have is a year-to-year contract, they are typically only a losing season or two away from losing their job.

This past June, the 320 coaches at the 14 institutions in Pennsylvania's State System of Higher Education joined a union, the Association of Pennsylvania State College and University Faculties. The collective-bargaining agreement, which is believed to be the first involving a group of college coaches, has two main objectives: improve job security and eliminate salary disparity. The agreement guarantees that coaches with more than five years of service will be allowed multiyear "rolling contracts," which can be extended annually. Head coaches will receive a three-year rollover contract, with assistant coaches receiving only a two-year contract. Since rollover contracts call for the contract terms to "roll over" after each year, the head coach will always have three years remaining on his or her contract. Also, since the agreement states that a coach can only be terminated with just cause, schools that terminate a coach's contract without just cause would be required to pay the coach the remaining three years (or, in the case of assistants, two years) of the contract's value. The agreement therefore makes it more expensive to replace coaches.

As for disparity in coaching salaries, the new collective-bargaining agreement establishes provisions for minimum and maximum annual salaries for both head coaches and assistants. The new minimum salary will be $30,000 for head coaches and $25,000 for assistant coaches. In addition, the agreement provides for yearly merit-based raises over the length of the agreement, which award the coaches based on professional involvement on their campuses and for their players' success on the playing field and in the classroom. In order to determine merit, the agreement requires that each coach be evaluated each semester and annually.

Now that the agreement has been approved, there are a number of issues that need to be addressed.

1. IS PENNSYLVANIA UNIQUE? The first question raised by the agreement is whether (as some administrators, coaches and union officials have predicted) it is the start of a national movement, or whether Pennsylvania is so unique that such a union would only work there.

The Pennsylvania State System of Higher Education is distinct in the sense that all of the universities in the system are medium-size regional institutions with very similar sports programs. In addition, all of the schools belong to the same conference (the Pennsylvania State Athletic Conference) and Division II of the National Collegiate Athletic Association, which means they all answer to the same governing bodies. Another important factor is that the union in question represents the approximately 5,500 faculty members in Pennsylvania's state system. Therefore, the system's administrators and university presidents already have a working relationship with the union.

Out of all these factors, probably the most important is that all the schools belong to the same conference and NCAA division, since all the coaches are working under the same rules. To cite a contrasting example, even though all the member institutions of the California State University System are from the same state, they compete in different divisions of the NCAA and the coaches have different needs and requirements. Therefore, it would be more difficult for the coaches of the California State University System to form a union or establish a unified voice.

2. COMPLACENT COACHES While system administrators and coaches alike say they are happy with the final agreement, another concern raised by some administrators is whether coaches, as a result of increased job security, will lose their competitive edge.

This argument would seem to lack merit. No one has ever suggested that Joe Paterno, who has served as head football coach at Division I Penn State for 38 years, has lost his competitive edge just because he is well paid and enjoys job security. Coaches, by nature, are extremely competitive and tend to measure their own success by wins and losses.

In addition, while the agreement may make coaches' jobs seem more secure, it actually mandates two yearly evaluations and allows for contracts to be terminated with just cause. If coaches did get complacent, it would quickly become apparent and they would likely not stick around for very long.

As for the institutions, since the minimum guaranteed salary for head coaches is only $30,000, the actual cost to the institution should be very small. For example, while the agreement will force an increase in the athletic department budget at Edinboro University, the agreement will only require the school to raise the salary for one head coach and two assistants, costing the department less than $10,000.

4. COACHES ON STRIKE? Another interesting issue raised by the agreement is the prospect of coaches going on strike. At the college level, one of the most fundamental demands coaches make on their athletes is total commitment to the sport. However, now that coaches are part of a collective-bargaining unit, there is a possibility, however small, that a coach would have to leave his or her team during a work stoppage. If this ever happened, the coach's credibility with the team could be harmed irreparably - and quite possibly, all coaches' reputations might suffer with future athletes.

Another potential problem for the coaches is the perception that they are among the highest-paid employees on campus. While this may be true at the Division I level, it certainly is not true elsewhere. However, the public perception that coaches are highly paid could cut into public support for striking coaches.

While it may be too early to get an accurate reading on the situation, the decision by Pennsylvania coaches to join a union will almost certainly impact the coaching profession as a whole. While they themselves will be able to enjoy a little more job security and financial benefits, it is not clear yet what effect being a member of a union will have on the coaches' relationship with their players and their schools. Likewise, it remains to be seen whether the agreement is the start of a national movement.