How Is the Rec Industry Preparing Its Young Professionals To Be Tomorrow's Leaders? 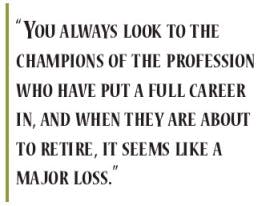 Dan McLean has heard the whispers many times before, but only recently has he given them a second thought. That's because the topic of those whispers - the pending retirement of the public recreation industry's current leadership, made up primarily of baby boomers - hadn't been a reality until now.

"We're hearing a lot of this. Whether we talk about higher education or public parks and recreation, we have an aging leadership core," says McLean, chair of the Indiana State University Department of Recreation and Sport Management and president of the Society of Park and Recreation Educators (SPRE). "While we seem to be turning out a lot of students, they're not all going into public parks and recreation like they used to. There is some concern about being able to fill the ranks as people retire. There always seem to be people out there willing to take a job, but we're looking for qualified people."

Which begs the questions: Are there enough qualified recreation professionals to take the reins as the industry's leaders retire? If so, how are these individuals being prepared today for their roles of tomorrow? Is enough being done to recruit, train and retain this talent?

Van Anderson, director of professional services for the National Recreation and Park Association, seems to think so. "It's common for people to think that the next group is not ready or capable to do things," he says. "But quite frankly, there seem to be people in the system who move up and are very successful. I think you always look to the champions of the profession who have put a full career in, and when they are about to retire, it seems like a major loss."

Especially when department directors industry-wide often boast upwards of 25 to 30 years of experience. While such experience is invaluable to a department, younger staff members can also perceive it as a barrier to their career advancement. The longer the top spots are occupied, the less opportunity for young professionals to climb the ranks. "One of the problems we have in the profession is that we've not been very upwardly mobile," says McLean. "People get into administrative positions and they stay there a long time. Without naming any states, you can look at a number of them and over a period of 10 to 12 years, there's been almost no turnover at the top."

Hand in hand with a young professional's fears of limited advancement opportunities are concerns about salary potential. Although up-to-date salary surveys are readily accessible online or via college guidance offices for a number of other fields - including engineering, law and medicine - it's much more difficult to find current statistics for the recreation profession. According to Anderson, more than 10 years have passed since the industry's last comprehensive salary survey, although NRPA is currently working with the Florida State University Department of Recreation Management to publish such a survey next year. The study will detail salary trends according to geographic area, department size and job title.

Until the survey is published, Anderson says there's no way to determine whether compensation is higher in other fields, such as sports management and travel and tourism. Both of those programs are commonly offered at colleges alongside recreation management and have on occasion been blamed by recreation industry veterans as being responsible for luring away young talent.

Michael Blazey, chair of the California State University, Long Beach Department of Recreation and Leisure Studies and the SPRE's president-elect, has seen a fair share of his former students forego a career in public recreation for one in the private sector. For the most part, though, he's confident in the rec industry's ability to retain its best and brightest. "Our students sometimes go into those other areas," he says. "But in our case, the numbers are either holding steady or are actually increasing a little bit to the public sector. The reason for that is location. We are blessed with umpteen municipalities that have a need for employees. Generally speaking, our students are employed before they even graduate."

For his part, Blazey - who admits he knows little about rec program graduation statistics in the eastern half of the country - is intent on educating himself and, in turn, helping others learn more about the career trends that will ultimately shape the recreation industry's future. Blazey serves on the editorial staff of the Journal of Park and Recreation Administration, which early next year will publish a special issue dedicated to the subject of recreation professional development. As guest editor of the issue, Blazey has already begun soliciting manuscripts and hopes to receive submissions on such topics as the status of personnel in parks and recreation, mentoring of students and young professionals, and the content and competencies of model professional-preparation programs.

"When I was in professional practice, I was up to my eyeballs in just the day-today business, and the idea of doing much in the way of continuing education was way at the back of my mind. What I would pick up would be from reading the publications," says Blazey. "Nowadays, professionals have the advantage of web-based instructional devices, which oftentimes don't get recorded. Who knows if the community services director from Torrance hops on the web site for Hutchinson, Kan., and gets ideas for his department. That's continuing education of a very private type. Although we don't have any way of knowing if that occurs, I suspect it does."

F or those individuals who can afford to take a year or two off from work to do it, McLean suggests they return to school to earn a graduate degree that complements their chosen professional specialty. Blazey says some might even consider pursuing a master's degree in public administration. "A lot of times, people move beyond the administration of the community services division and go into city management and other roles," he says. "They're well-suited for it."

Besides education, McLean outlines several other keys to the development of young recreation professionals. First, he encourages them to seek out challenging opportunities. Second, young professionals should attach themselves to mentors, individuals willing to invest time and energy into the sharing of knowledge. Finally, McLean advises the next generation of leaders to be mobile. "Don't root yourself in a single location," he says. "You've got to be willing to move to gain the kinds of experiences you want. Unfortunately, there aren't a lot of people who are."

As director of parks and recreation in Cordova, Alaska, Jeff Hawley is all too familiar with this reality. Cordova is a small fishing community located in the eastern end of Prince William Sound, 150 miles southeast of Anchorage. The city has a wintertime population of 2,500 (swelling to 5,000 in the summer) and is only accessible by plane or ferryboat.

Despite Cordova's isolated setting, it has a flourishing aquatics program, says Hawley, who as of press time had been searching for a pool manager/recreation specialist since mid-November. In the first four weeks he advertised the position on NRPA's Career Center web site, Hawley received only five inquiries. "It'd be an ideal situation for somebody to come in, get some supervisory experience and move up from here to somewhere else," he says. "There are actually quite a few positions in Alaska that would work that way for young people. We just have a hard time filling them."

Outside of the responses from NRPA's web site, Hawley has received interest from a few locals and other individuals seeking a quiet place to spend their retirement - but that's not what he's looking for. "The type of person I'm really looking for is somebody young who wants to come in and start out," he says. "The type that's really motivated and has a lot of good ideas - new blood to put into our community."

It's also the type of individuals that the rec industry's outgoing leadership is counting on to build on its legacy. "People who are constantly seeking to improve themselves and the things they are doing, who are growing and asking lots of questions, those are the people who are going to be successful," says McLean. "Those are the ones we're looking to move into leadership positions."