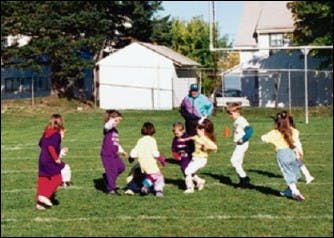 Seven years ago, Kenneth Hanscom got his first taste of youth sports as coach of his 10-year-old son's recreation league basketball team. As the longtime director of the Brewer (Maine) Parks and Recreation Department, Hanscom had many times helped design and organize programs for upwards of 800 youths. But never before had he enjoyed such a hands-on role in teaching kids about the values and lessons - not to mention the thrill and excitement - of team sports.

However, Hanscom's experience was eventually soured, not by the narrow loss his team suffered one day, but by a disturbing phone call he received an hour after the game. "Another coach and I had the same philosophy: Everyone paid the same registration fee, so we made sure every child played equal time, whether he was uncoordinated or super-coordinated," he says. "Although it was a very tight game, we played all of our kids equally. Then I got a call from the 'superstar' on that team - mind you, he's a fifth-grader - and he said, 'Mr. Hanscom, I don't want to play with you anymore because I don't feel you want to win badly enough.' I could hear his father standing in the background, coaching his kid through it. That really hurt, because we wanted to win the game and there were other ways to do that without benching one kid over another."

That phone call still bothers Hanscom, and the memory of it was refreshed when he came across an editorial in the Jan. 10, 2002, edition of the Bangor Daily News that asked a poignant question: "Youth sports: Where did the fun go?"

Shortly thereafter, Hanscom and his staff decided to put an end to the department's annual peewee all-star basketball tournament, which had been held every spring for the previous 20 years. Despite its success ("We made sure each child played the minimum amount of minutes. We made it a fun event," says Hanscom), it was the tournament's "all-star" tag that prompted the move. "Shortly after that article came out, we canned that program," Hanscom says, "because we figured we had better walk the walk."

As elite youth sports programs proliferate in virtually every area of the country, it's becoming more of a struggle for public recreation professionals to walk the walk by offering youths fun, educational programs without excluding (or even appearing to exclude) any willing participants. The pressure on recreation departments to institute elite programs varies from region to region, and even from community to community. But it undoubtedly originates from the parents of youths in those areas, says Bob Bigelow, a self-described youth sports activist and coauthor of Just Let the Kids Play: How to Stop Other Adults from Ruining Your Children's Fun and Success in Youth Sports (Health Communications Inc., 2001).

"Let's say you have soccer for 4-year-olds, which many communities in this country do. I guarantee you that all the moms and dads, by the time their kids are 6 or 7, automatically know in their minds who the better players are," says Bigelow. "And their thinking is, 'We can't stay in town and play with the pitifully average. We've got to take our excellent players and go play Podunk, because it has the same kind of excellent players that we do' - hence, the existence of travel teams. This is where the BS starts to fly, because we're already separating the haves from the have-nots."

Perhaps not all youth sports travel teams - despite the popular notion that they cater only to an elite or select number of players - are as bad as they seem. The parks and recreation department in Orono, Maine, nine miles north of Brewer along the Penobscot River, offers travel teams for middle-school-age youths. What separates Orono's program from private athletic associations is that there are no roster cuts. It's a greater challenge for officials with the Port Chester (N.Y.) Recreation Department, where soccer is, by far, the most popular youth recreational activity. Recreation director Thomas Hroncich credits the popularity of soccer in Port Chester - a village of 30,000 residents - to its 50 percent Latino population, fed by an influx of Central and South American and Caribbean immigrants moving out to the suburbs from New York City. "When they came here, they were used to playing soccer at midnight," says Hroncich. "They have the time, experience and skills."

Hroncich and his staff encourage travel team members to also play in the recreational league, to help players in that league further develop their skills. However, few travel team members agree to do so - some of them citing fatigue, but others because they look at it as if they're playing down. "The reality is that everybody who plays a sport wants to play on a higher level as they get older," says Hroncich. "My concern is that if we don't get the travel team kids to play in the rec program on an ongoing basis, then the rec program may eventually die out."

To Bigelow, there's no getting around the fact that recreation departments offering elite youth sports programs will eventually find themselves sliding down a slippery slope. "Parks and rec departments are certainly the linchpins of community sports. Even though they are, they generally tend to shy away from travel leagues, because travel leagues mean exclusion. That's not the recreation philosophy," he says. "If they try to do travel leagues, they try to do it the right way. But then the travel/elite/select philosophy clashes with the philosophy of inclusion."

How do recreation departments continue to offer quality, inclusive programming in a youth sports climate clouded by ever-changing demographics and ego-driven parents who want to prove their kids are better than the rest? Some departments will no doubt opt to stay away from travel and elite programs for as long as they possibly can. Yet even Hanscom has given consideration to testing out a travel league similar to the one that exists in Orono. What's holding him back is his concern for participants' long-term welfare and enjoyment of sports. In Hanscom's opinion, too much exposure to competitive sports at too young of an age can only be detrimental. "When a 6- or 7-year-old thinks he's an all-star - or his parents do - that's just pushing too early and the parents' expectations are too high," he says. "We have seen it time and time again. The kids turn 13 or 14, and they've played too many games. They're burned out."

Steering younger children away from competitive environments by instead offering them instructional programs has done the trick in Webster Groves, Mo., whose recreation department boasts both an indoor soccer program for youths ages 4 to 8 and a non-competitive tee-ball league for 4- to 6-year-olds. "Most parks and rec departments have something like this for little kids - maybe not soccer, maybe gymnastics where they just tumble around," says Steve Clark, Webster Groves' recreation supervisor. "We try to have something for everybody. We don't want to get involved in the competitive stuff. It's just for the kids to learn and have fun."

Such lighthearted programs should quell the premature all-star dreams of most parents with children under the age of 9. The tougher challenge is how to deal with those moms and dads lobbying for their sons and daughters to make the elite, select or travel squads at the fifth-grade level and above, generally the point at which some youths begin developing better coordination and skills. Bigelow believes that through prudent management of public recreation space, parks and recreation departments - regardless of whether they offer elite programs - can bring about positive change locally.

"If you're a travel or select club, you always want more field space or gym space than the city can give you - after all, you're elite and you need more time to practice because you have to go play some other team that's practicing 15 times a week," he says. "Parks and recreation departments are beginning to use what's known as the 'power of the permit.' They get to tell you who uses the fields and who doesn't. There will be a backlash and it's already happening in some places in this country. After all, why should parks and rec people give up 30 percent of their field space to benefit 3 percent of their kids?"