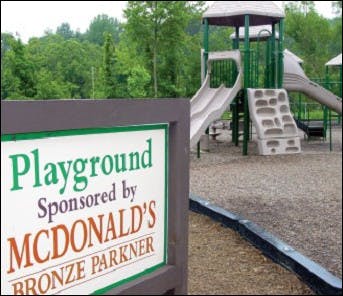 The Buncombe County (N.C.) Parks and Recreation Department has dealt with a 15 percent budget reduction over the past three years, despite a 49 percent increase in facility usage over the past four years. "The way the economy is right now, I find it a little harder every day," says Rhett Langston, Buncombe County Parks and Recreation's administrative officer. "Sometimes I feel like I'm underestimating how bad it really is." It's an economic situation not uncommon to any corner of the country.

The negative effects of the belt-tightening in Buncombe County have been softened, however, by the department's innovative corporate sponsorship programs that unofficially debuted in 2000, but haven't taken shape until just recently. Over the past four years, the Corporate "Parknership" and Naming "Parknership" programs are responsible for raising more than $330,000 in sponsorship funds and contributing significantly to the development and ongoing maintenance of the $1.2 million Buncombe County Sports Park, which opened last year.

The Corporate Parknership Program requires a three-year commitment from sponsors and is designed to be affordable for businesses of all sizes. For the first two years, a sliding scale determines fees (ranging from $350 to $15,250) for companies with anywhere from one to 500 employees, and all sponsors are asked to donate $100 in the third year. For as long as the corporate "parkner" remains a sponsor, a nameplate is displayed in its honor at 30 department facilities. For their tax-deductible donations, corporate parkners can also decide what recreation component (education programs, entertainment programs or facilities) to support with their contribution and receive for their employees free-admission coupons to more than 20 recreation facilities.

Through the naming rights program, businesses have the choice of being honored as sponsors of Buncombe County recreation facilities, special events, programs or exhibits at the WNC Nature Center, which serves as the county zoo. Early this summer, Buncombe County Parks and Recreation initiated a third program called "Play Hooky," which offers local businesses discounted passes to several county recreation facilities.

The sponsorship dollars generated by these programs have been a great boost to the department, but Langston believes that in the current economic climate, the business community needs public recreation just as much as public recreation needs the business community. "We just want to allow companies to do something for their employees. For example, if they couldn't give out pay raises this year, maybe instead they can afford something like this," says Langston of the Play Hooky program. "They can say, 'Here's a small gesture. Go out and recreate and have a good time this summer.' It's just a different angle we're taking. We're trying to offer our resources in every possible way we can."

Perhaps, but in the eyes of the public, do such partnerships introduce a risk of overexposure - for either public recreation departments or their corporate counterparts?

Some believe it's damaging to the public good when city governments entertain corporate sponsorships to support facilities and programs such as parks and recreation. "That's a slap in the face of the taxpayer," says Gary Ruskin, executive director of the Portland, Ore.-based nonprofit advocacy group Commercial Alert. "Why? Because the taxpayer paid years, if not decades, for those things. To allow some company to affix its name on the cheap is an insult. Municipalities are begging for money because they're so broke, but the answer is not to put our nation's parks up for sale. Parks are intended to be a sanctuary from the hustle-bustle and the assault of marketing that is now a part of our daily life. If you take away the sanctuary nature of the park and turn it into yet another place where we're assaulted by the marketeers, then you destroy a lot of the value of and reasons for why we have a park."

Ruskin believes that the answer to public recreation's budget shortfalls can be found in philanthropy. "When corporations and wealthy individuals have a great deal of disposable income that they could give to parks in need, then they should do so," he says. "They'll receive a heartfelt letter of thanks, there are no strings attached and that's the deal. It's not a partnership, it's not naming rights, it's philanthropy and that's the right way to go. But increasingly, corporations want something back for their dollar and then it becomes marketing. That's the problem."

Langston doesn't necessarily view such arrangements as being all that sinister. "We've never had any criticism about what we're trying to do. But then again, we don't sell everything. If we did, I don't know what kind of feedback we'd get," he says. "All in all, everyone is pretty attuned to understanding the parks and recreation department's economic situation. Our real objectives are always to be as little a burden on our taxpayers as possible and to provide the best we can."

That said, recreation departments should temper their desire to please the community-at-large with a bit of caution. No entity, public or private, is entirely immune to the economy's whims, and recreation departments that lean too heavily on corporate donations may find themselves in an even tougher spot if their sponsors' wells run dry. "It's fine if we can find sponsorships to offer more programs and special events - in other words, bring more to the plate for our citizens," says Langston. "But certainly, we don't want to find ourselves in a position where every fiscal year we have to have X amount of sponsorships or we'll have to close a facility."

In fact, quite the opposite has happened in Buncombe County, likely because the recreation department has kept a relatively low profile with respect to corporate sponsorships. Since 2000, three new recreation facilities have opened, including two pools and a sports park. Pointing to the rapid increase in recreation facility usage since that year, Langston is confident that Buncombe County's recreation facilities won't become over-commercialized - especially since the department's philosophy is for all signs and other public recognition of corporate sponsors to adhere to the community's tolerance level. ("Do it in good taste" is Langston's simple rule of thumb.)

Until proven otherwise, corporate sponsorship programs appear to be a viable - and responsible - source of income for Buncombe County Parks and Recreation. By supplementing the six-year-old department's $778,000 annual budget, the sponsorships help expand recreation opportunities for the county's 206,000 residents. "Our product is our ability to bring a lot of people to the parks, and that exposure is what we can offer to local businesses," he says. "It's a good deal all around."