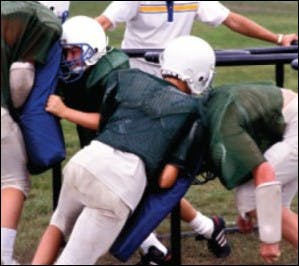 How big is too big? Youth football leagues across the country - particularly those in areas without middle school football programs - are grappling with that question, and whether to remove weight limit restrictions hanging over would-be participants, with much of the pressure coming from the parents of so-called oversize youths.

"We have a renegade father who has made a personal mission out of eliminating weight limits in youth football," one South Carolina parks and recreation professional recently reported on the National Recreation and Park Association's online forum. "He claims discrimination against large children and that it is not appropriate for youth to play in categories based on weight, rather than age. It has snowballed into involving the 5 o'clock news, state representatives and even congressmen!"

And then there's the story, reported on an online youth sports forum, of a self-professed "mother of a big boy." Eight years ago, because his weight (99 pounds at 8 years old) exceeded a particular league's limits, he was told he'd have to play in a division for boys four years his senior. "After a week of practicing blocking for the quarterback, I knew that regardless of his weight and athletic abilities, because of the age difference, there was no way he had equal strength and coordination of the older boys," the mother said. "I took him out of the program and told him he would have to wait until high school, when his size would be appreciated." (The youth is now a 6-foot-2, 210-pound sophomore defensive end who earned team Defensive Player of the Year honors as a freshman.)

Bill Casagrande, president and founder of the Baltimore-based Mid-Atlantic Unlimited Youth Football Association, which caters specifically to middle school-age youths who are restricted from playing elsewhere because of their weight, believes that episodes like this are all too common. "There are individual programs that say there aren't many big kids around in their area, that they only got three or four to sign up the previous season. We get kids every year who are called all kinds of names - fat boys, heavyweights - kids who are getting turned away. All I've done is accommodate a need that is already there," Casagrande says. "Parks and recreation professionals need to include all kids, just like for all other sports - lacrosse, soccer, basketball. You don't ever hear them saying that if you're over 6-5, you can't play basketball. They need to open their arms a little bit wider to these kids. If they're not supposed to discriminate based on race, sex, creed or color, then what about size?"

Apparently, many youth football officials don't feel they are committing any social ill by disallowing certain players based on their weight. In fact, most organizations run age-weight leagues, which determine a player's eligibility and level of play according to his age and weight. Typically, each age division allows players within a certain weight range. Under limits set by Pop Warner Little Scholars Inc., the largest youth football organization in the United States, junior midget players (ages 10 to 12), for example, can weigh anywhere from 80 to 125 pounds.

Pop Warner officials base these weight limits on recommended youth weight charts published by the American Academy of Pediatrics and the Centers for Disease Control and Prevention, in an effort to give the guidelines as much scientific backing as possible. "If you look at the CDC charts, you'll see that we include kids who weigh anywhere from the 10th to the 95th percentile for their age," says Jon Butler, executive director of Pop Warner, which, with more than 240,000 participants nationwide sets the national standard for many leagues, including those run by municipal recreation departments. "We try to be as flexible and accommodating as possible."

Proponents of weight limits in youth football say such practices offer protection, not discrimination as Casagrande alleges. To illustrate the point, Butler recalls a conversation with one official of a "striper league," a league that allows players of unlimited weight at the tackle, guard and center positions (the weight of all backs, however, is restricted), identifying them with a special stripe on their helmets. "We were talking about his league, his equivalent to our midget division," he says of Pop Warner's division for 11-to-14-year-olds who weigh anywhere from 95 to 145 pounds. "I asked him how big the kids on the line were, and he said they were all around 200 pounds. Now, granted these are kids right around the onset of puberty, when they can hit a huge growth spurt. But that aside, you don't want that 200-pound kid falling on top of a 95-pound kid."

Casagrande contends such concerns are unwarranted. "We have yet to have a kid turn up in the obituaries," he says. "We battle that myth every season."

An April 2002 study conducted by the Mayo Clinic Sports Medicine Center in Rochester, Minn., confirms, to a degree, Casagrande's view. According to researchers there, no significant correlation exists between body weight and injury.

Still, when they instituted striper-style league play last fall, officials with Knox County (Tenn.) Metro Football - operated by Knox County Parks & Recreation and the city of Knoxville Parks and Recreation Department - had to convince parents of smaller players that their children were safe. "Some parents were saying, 'I don't want to see my kid out there with these jumbos,' " says Allen Lambert, Knox County's recreation superintendent. "We said, 'Let's watch the game first and see how you like it.' Once they saw there were no broken limbs and that the small kids were still able to move around, they became more supportive."

Although striper leagues represent a compromise of sorts, proponents of unlimited-weight youth football claim that striper league rules are designed to favor smaller players, and don't do much to enhance the enjoyment of or prevent injury to larger players. In Knox County, for example, if players of unlimited weight recover a fumble, they aren't allowed to advance the ball.

Other striper leagues allow unlimited-weight players to recover fumbles, but they can only advance a maximum of 10 yards. "Let's say a 180-pound kid is playing defensive tackle. He strips the quarterback, but the whistle blows the play dead. He can't go all the way down the field for a touchdown. There's something not right with that," says Casagrande. "Or if somebody drags that big kid down, which will probably involve some little kid jumping on his back, who's going to get hurt. Not the little kid. It'll probably be the big guy, getting pulled from behind by the little kid."

If there is one fate shared by kids big and small, it's that they all must eventually enter high school. Proponents of unlimited-weight youth football argue that such leagues provide a precious opportunity to middle school-age youths who otherwise would not get to learn football basics in a coached, competitive environment before moving on to the next level - that is, if they even decide to try out for the high school team. "Kids who are turned away might be more reluctant to go out for high school football," says Casagrande. "Or they get to high school and don't know anything. They don't know how to put on a chin strap, put their pads in their pants, or even how to line up in a three- or four-point stance."

Butler doesn't share Casagrande's concerns. "At 15 years old, I was 6-6 and 230 pounds. I didn't get to play Pop Warner football, but I went on to play in high school," he says. "I don't buy the argument that, 'My child will be scarred for life.' "

Butler also doesn't lend any credence to the claim that it's natural for today's youths to weigh more than those of past generations. "People say their kids are bigger now. But the reality is that kids are more obese," he says. Nevertheless, Pop Warner has no choice but to accommodate the trend, writing into its rules for the upcoming season a five-pound weight increase for each division, only the third such change in the past 13 years.

In Lambert's mind, those youths who participate in some form of youth football - whether in a program that allows unlimited weight or one that imposes limits in some manner - are better off than those who do nothing at all. He remembers the days before Knox County offered striper youth football. "We figured that 10 percent of the kids were being weight-discriminated. We didn't say they couldn't play, but we made them play at a higher level. And the biggest thing for these kids is to be able to play with their fourth-grade friends," he says. "When they moved up, the kids felt like they didn't fit in. The kids didn't enjoy it; their parents didn't enjoy it. Then they would quit the program, go right back to sitting on the couch and playing Nintendo, where they would only get bigger."