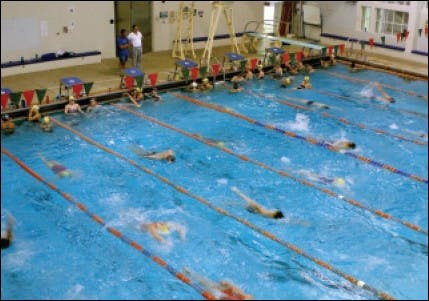 Last spring, the Missouri State High School Activities Association came under fire when parents of interscholastic swimmers and divers from the St. Louis and Kansas City areas got fed up with schools having what they consider too much control over student-athletes. But rather than work directly with those schools and the state association, those parents, like other fed-up parents across the country, launched an attack via their state legislature.

Senate Bill 1366 and House Bill 920 would have established the right of student-athletes to participate on interscholastic and non-school teams simultaneously. Even though the bills never made it to a vote before the Missouri General Assembly adjourned in May, they did spur the MSHSAA to reach some sort of compromise. The association formed a small ad-hoc committee to specifically address the issue of dual participation in swimming and diving, sports that often require facilities and coaching expertise that are in great demand but short supply.

In June, the committee found a potential middle ground. It proposed allowing a member of a school's swimming and diving team to practice or compete as a member of a non-school team under three conditions:

1. Priority would have to be given to all school team practices and competitions.

2. No school time could be missed to compete in, practice for or travel to a non-school event without school administration approval.

The MSHSAA currently has a bylaw allowing elite student-athletes to compete in limited Olympic-development competitions, but the proposed new bylaw "would make what they do now much less cumbersome to do and open some new doors to them," says Becky Oakes, the state association's executive director, adding that several suggestions have been discussed over the years regarding how to approach dual participation in swimming and diving. "If the parents who were involved with promoting the legislation had approached their local schools first with their concerns, we probably would have been on a much different path toward the same outcome," she says. "As it was, we had to take the role of opposing the legislation."

Developed by representatives from both interscholastic and non-school swimming and diving programs, the proposal will go to all of the association's 763 member schools for a vote this fall - regardless of whether they sponsor swimming and diving teams.

Kevin Fober, athletic director and swimming and diving coach at all-boys De Smet Jesuit High School in St. Louis and a member of the ad-hoc committee, will vote in favor of the proposal - but he thinks it will be a "tough sell" to get majority approval. "The first thing coaches and athletic directors are going to be concerned about is losing control of their programs," Fober says. "That's why there were major objections to getting the state legislature involved. Personally, I didn't think that was appropriate. If there's going to be a change, it should come from the state association."

Even if the state association's members approve the bylaw change for swimming and diving, it may not be enough to deter proponents of the dual-participation bills from continuing their efforts by taking aim at other sports.

Rep. Gina Walsh (D-St. Louis), who drafted House Bill 920, says she's encouraged by the recent actions of the state association, but plans to keep a close eye on developments. "It depends on if it seems the association is bargaining in good faith," says Walsh, a mother of three teenage daughters who aren't student-athletes. "I can't tell you right now if I'll pursue the legislation, but I probably will. The state association says that the kids are over-trained, that they're blah, blah, blah. Yet they can play soccer at school and then go play softball wherever they want, just as long as it's not the same sport. We don't tell high school kids that they can't go to the community college and take extra science classes, but we can tell them they can't participate in club sports at the same time as high school sports?"

A survey of all 51 state associations conducted by MSHSAA officials revealed that 23 states allow dual participation in swimming and diving, but with vastly different restrictions.

In states where dual participation in sports is permitted, schools can set their own guidelines. La Jolla (Calif.) Country Day School, for example, created a participation contract, requiring coaches of high school and traveling teams to put in writing how they plan to resolve all scheduling conflicts and avoid overextending dual-participation athletes.

Other states have managed to retain their dual-participation rules over the years. Those restrictions were recently tightened in Illinois, as student-athletes in that state are barred from participating in any outside activity that requires them to use the skills of their chosen sport - meaning that high school basketball players are not even allowed to be contestants in free-throw contests and similar activities.

"You either choose to be on a club team or a school team," says Jim Flynn, who recently retired as an assistant executive director of the Illinois High School Association. "You have to make a choice."

But that's a choice that proponents of Missouri's legislation argue is too limiting. "This is a family decision, one best made at home," Walsh says.

"I want to prevent kids from being disallowed without having had a chance to prove that they can do both," Sen. Anita Yeckel (R-St. Louis), who sponsored Senate Bill 1366, told the Columbia Daily Tribune when the legislation was introduced. "And if they can't do both, then they have to make a choice."

Fober is confident his swimmers won't be able to do both. His varsity team practices eight times a week - four morning sessions and four evening sessions. Says Fober, "If someone thinks he can do both, I'm going to tell that kid, 'I don't think you're really going to have time to do anything outside of our team.' I will suggest he not do both, but I won't tell him not to."

Fober also might play up the increased possibility of injury to student-athletes considering dual participation. Overuse injuries happen frequently in swimming, and those injuries could be further aggravated by working with two coaches who may have radically different philosophies and training approaches. "The extra practices are not necessarily beneficial," he says. "I am concerned that a kid could get burned out."

Fober's not the only coach who's concerned about where high school and amateur sports may be heading in Missouri. Even coaches of non-school teams have expressed concern that the state's dual-participation proposal was too lenient. "I don't agree with the bill 100 percent, because it's too open-ended," Columbia Swim Club coach Phil Garverick told the Daily Tribune in March. "You're going from one extreme with the MSHSAA - maybe they're a little too tightly clamped down on what they're trying to do - to opening the door all the way to the other end and letting people do whatever they want. I don't think it needs to go to that extreme."

While Fober concedes that the MSHSAA may have exercised too much control in the past - hence the proposed bylaw change - he says the issue remains clear: "If you're going to commit to a high school program, you're going to have to follow through and stay committed to that program."