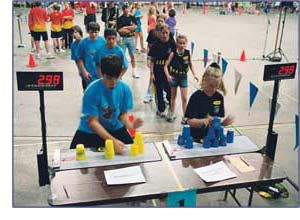 Photo of kids stacking cupsThis month, more than 1,000 participants of all ages -- including high school students -- are expected to descend upon the Denver Coliseum for the 2005 World Sport Stacking Championships. They will compete against each other in timed heats, stacking 12 plastic cups, each weighing approximately three-quarters of an ounce, into pyramids of various sizes before unstacking them and stopping the clock. The world record for assembling and disassembling the most common pyramid pattern is 2.72 seconds.

This is serious stuff.

In fact, 2005 marks the third anniversary of the event, sponsored by the Highlands Ranch, Colo.-based World Sport Stacking Association -- which, by the way, changed its name from the World Cup Stacking Association in January to better reflect an activity that proponents say enhances ambidexterity, hand-eye coordination and concentration. Recent studies at Texas Tech University and the University of Wisconsin-La Crosse offer evidence to support those theories.

"People who have never seen it often hear the term 'cup stacking' and get an instant mental image of blocks that are used by toddlers," says Bob Fox, president of Speed Stacks Inc. in Englewood, Colo., the leading provider of sport stacking equipment and the sport's most vocal advocate. "Sport stacking doesn't have the same definition as a traditional sport, it's a skill set that transfers over into a lot of other skills, such as kicking, hitting, dribbling, catching and throwing. And believe it or not, it's actually quite exciting to watch."

It's also quite controversial -- especially as more elementary, middle and high schools add sport stacking to their physical-education curriculums. "The controversy about cup stacking is not really about the activity itself," says Dolly Lambdin, president of the National Association for Sport & Physical Education (NASPE) and a senior lecturer in the kinesiology and health education department at the University of Texas. "It's actually a pretty cool activity. However, if it's used in such a way that it makes kids more sedentary than active, it's not a good thing. Our stance is that quality physical-education programs should have kids engaging in moderate to vigorous physical activity for at least 50 percent of the class. It's hard to have enough physical activity with this kind of game. But it's not impossible."

Rob Nichols, a physical-education instructor at Milwaukee's McNair Academy, a public elementary and middle school, isn't as diplomatic. "I was crushed to read that in this day of escalating childhood obesity, we are seriously talking about cup stacking in physical education," Nichols wrote in a letter published by the Milwaukee Journal Sentinel after the paper ran a piece in November praising the activity.

Fox, a former physical-education teacher who used stacking in his curriculum, understands the skepticism. That's why last year his company published a 24-page guide called On the Move to help teachers incorporate more than 70 different fitness elements into sport stacking activities. "I don't blame people who are cynical. Normally, I would be, too," he admits. "Middle school and high school physical-education teachers and coaches tend to be very traditional, and stacking is very out of the box. But think back to the inception of basketball. I can imagine the naysayers were out there when James Naismith said, 'OK, we're going to take this ball and throw it into a peach basket on the side of a barn.' When you boil down almost any sport, it can sound pretty silly."

Sport stacking made its mainstream debut on "The Tonight Show" back in 1990 and has evolved since then. The basic premise now involves strategically stacking and unstacking 12 cups in pyramidal groups of three, six and 10. Variations on the routines are practically endless -- from running relay races between stacking stations to performing push-ups or standing on a balance board while stacking. (To eliminate air entrapment and thus speed cup movement, Speed Stacks Inc. sells cups with holes in the bottom, along with mats, timing equipment and "United We Stack" T-shirts.)

By some estimates, more than 8,300 sport-stacking programs exist around the world -- most of them in U.S. physical-education programs. Parks and recreation departments, Boys & Girls Clubs, YMCAs and church-youth groups also incorporate the activity, and organizers of athletics camps and clinics say sport stacking is a valuable training tool.

Indeed, Fox's 17-year-old daughter, Emily, began stacking in the third grade -- right around the time she started playing basketball. En route to a full basketball scholarship at the University of Minnesota this fall, Emily was a starter on the girls' varsity basketball team at ThunderRidge High School in Highlands Ranch as a freshman and set two current Guinness World Records in stacking. Her goal is to play in the Women's National Basketball Association. "She's a terrific ball-handler," Emily's father says, "in large part, we think, because of all the sport stacking she's done over the past nine or 10 years."

Three years ago, Carol Martini would have scoffed at such a statement. But then the Andover (Mass.) High School physical-education instructor and 2002 NASPE Secondary School Teacher of the Year watched a stacking demonstration at the Southern/Eastern District convention of the American Alliance for Health, Physical Education, Recreation and Dance in Baltimore, where college students in attendance raved about stacking. "I thought, 'Gee, if it engages college students, it would probably engage high school students,' " Martini says. "I'm a firm believer in making connections with kids on any level in order to get them interested in physical education. Once kids come to class and you have them engaged in something, the rest is easy. Sport stacking goes along with that idea. It's not really replacing any major facet of our program; it's just one more thing to enhance our program."

Martini introduced her students to the activity, and now sport stacking is part of the physical-education curriculum for all of Andover High's 1,750 students in grades nine through 12. Martini encourages team activities (during which two people each use one hand to stack together) and creative competition (including an elimination tournament that involves stacking challenges spread throughout the gymnasium).

It should be noted that competitors in the World Sport Stacking Championships wear sweatbands, eye black and uniforms -- just like other athletes. And if golf, a sport frequently cited for its lack of physical activity, can be recognized as an official high school sport by the National Federation of State High School Associations, why can't sport stacking?

That notion intrigues Fox, but he hasn't even attempted to tackle the challenge. "I'd love to believe it could be recognized, but I would be very surprised if it actually were," he says. "But that's not necessarily our goal. We're just providing another neat opportunity to offer success to kids of all ages and abilities. If that eventually leads to status as an official high school sport, fantastic."