A merger - or was it a takeover? Puts a wayward YMCA back on track. 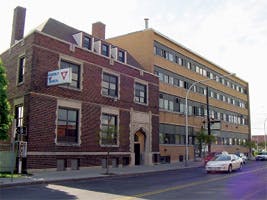 A lot has been written about nonprofit organizations' tax and fund-raising advantages in the recreation marketplace. There are, however, aspects of the business journey that are trickier for a nonprofit to navigate.

Murray's first involvement with the Niagara Falls Y occurred almost a decade ago, when the YMCA of the USA enlisted the YMCA of Greater Buffalo's aid in figuring out what was going wrong at the perennially troubled Niagara Y. Under the organization's management contract, Murray and his staff studied the situation and recommended a number of strategies that might help the Y stay in business. Murray describes Niagara's response as a directive involving a bodily function and an article of headgear - and so the Greater Buffalo staff went back home and decided not to get involved any further.

That's the way things stayed until about a year ago, when Niagara's insolvency was now a foregone conclusion. Representatives of the wayward Y came to Murray and asked for help - the facility would soon be unable to meet its payroll, and was laboring under an unpaid water bill that with penalties and interest had reached six figures. In a five-year span, the facility's debt load increased by 15 percent at the same time its earned revenue decreased by 25 percent.

"If your debt load is increasing and cash flow is going down, it doesn't matter if you're Gold's Gym or the Y," Murray says. "You're going out of business." Murray agreed with the Niagara board members that a merger was called for, but New York state law forbids boards of directors of membership organizations from authorizing a merger without first giving members a chance to vote on the measure. On July 9, 2005, the Niagara Y members voted - and they voted "no." Though it seemed as if the Y members wanted their building to go out of business, Murray wasn't really surprised, given what he knew about the way the Y had been operating.

"They had a two-tiered membership," he says. "You could buy a membership to use the Y, or if you were willing to pay more, you got a fancier locker room, maybe an attendant, maybe a steam and sauna where you didn't have to associate with the great unwashed masses. In the Y's world, that's a no-no. We said straight out, `If you merge with us, that has to stop.' It was the 145 members of that upper-tier club, all of them, who were responsible for defeating the merger." Ultimately, it was the Niagara Y's own legal counsel who rescued the deal. He scoured the law, Murray says, and found an obscure statute unique to New York that says if a YMCA or YWCA can be shown to no longer be fulfilling its mission, the Y board can petition the New York State Supreme Court to dissolve the 501c(3) corporation. And if they do that, the assets and liabilities of the Y revert to the national organization.

All of which came to pass after an investigation by the state attorney general's office. The YMCA of the USA requested that the Greater Buffalo Y manage the Niagara Y's assets, and on Nov. 18 the national Y's board of directors met in Nashville and voted to transfer those assets and liabilities back to the Greater Buffalo Y. By Dec. 1, it was a done deal.

"So, it was a long route to what is essentially a merger," says Murray. "And there were a fair amount of legal fees."

The focus now is on mending fences - the Niagara Y's upper-tier members (some of whom were on the board of directors) remain angry at what they view as an abrogation of their membership rights - and fixing a business plan that was unworthy of the name.

"All their programming existed within their four walls," Murray says. "For us, 60 to 70 percent of what we do is outside the walls of the facilities we own, in school gyms, elementary schools and parks. That delivers services, makes it convenient for people and produces cash flow. They were a Y with no fitness classes, no swim lessons for kids and no family activities. They tried to sustain a private health club in the middle of a not-for-profit service organization. You can't do it; it just doesn't work."

Or, perhaps, it shouldn't. Asked about the national Y's take on the Niagara situation, Murray chooses his words carefully.

"My philosophy and the national organization's might not be the same," he says. "The national organization is very nice about it, but this issue is kind of a dinosaur that has always been there. The way I see it, if you're going to serve the public, you have to have equal access for everyone. We put probably half a million dollars or more directly into subsidizing people who can't afford memberships. Once they're Y members, their economic status should not matter. In that Y, it did matter. People with money could buy a higher grade of service. That's just not consistent with our mission and philosophy."

Arnie Collins, the YMCA of the USA's associate director of media relations, notes that the national Y had a major role in bringing about the merger, through the active participation of the Y's consultant for that area of the country. In addition, there is a YMCA board that meets regularly to consider cases of Ys "that are so troubled that their holding a charter from us becomes questionable," as he puts it. But, Collins says, "All YMCAs are locally created by local volunteers who make up their boards. They are entirely in charge of all business decisions they make. We don't have any oversight, or certainly any authority or mandate. We're a support organization."

The Greater Buffalo Y is now the ultimate support organization, pledging to come up with $500,000 to make the Niagara facility solvent. In January, it added fitness classes - "That's a novel idea, isn't it?" cracks Murray - and other services, and it is actively seeking community and foundation support for repairs.

"We have to hustle money from outside and inside, and we also hope to increase revenue streams to help defray some of the costs," Murray says. "There are ways to get money, including support from the United Way and maybe government grants to help underwrite the cost of service delivery. But you know, if you're not offering any services, you can't ask for that support."