Transgender-Athlete Bill in Utah Shot Down

Gov. Spencer Cox of Utah vetoed a transgender-athlete bill on Tuesday that would have barred young transgender athletes from participating in girls’ sports.

Cox made an emotional plea for compassion toward transgender youth Tuesday in explaining his decision to veto the bill.

In a letter to the state's Senate president and House speaker, Cox said he was moved by data showing that among 75,000 kids playing high school sports in Utah, only four were transgender, with just one involved in girls sports.

"Four kids and only one of them playing girls sports. That’s what all of this is about. Four kids who aren’t dominating or winning trophies or taking scholarships. Four kids who are just trying to find some friends and feel like they are a part of something. Four kids trying to get through each day," he wrote. "Rarely has so much fear and anger been directed at so few."

Cox also cited research on how a sense of belonging could reduce suicide rates among transgender youth, adding that while he struggled to understand "conflicting" science, he sought to employ kindness.

"I don't understand what they are going through or why they feel the way they do. But I want them to live. And all the research shows that even a little acceptance and connection can reduce suicidality significantly," Cox wrote.

“For that reason, as much as any other, I have taken this action in the hope that we can continue to work together and find a better way," he added. "If a veto override occurs, I hope we can work to find ways to show these four kids that we love them and they have a place in our state." 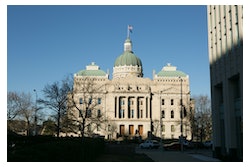 The Mental Health Advisory Group, created to advise the NCAA on emerging developments in mental health science and policy, will gather Thursday for its inaugural meeting.
October 6, 2022

Diversity, equity, inclusion and high school sports and performing arts are great partners, and the NFHS is doing its part to broaden perspectives of all stakeholders in our nation’s schools.
October 5, 2022

Ohio State athletic director Gene Smith said that he thinks the Big Ten is done absorbing any more schools from the Pac-12.
October 3, 2022

Air Force and four individuals have reached an agreement with NCAA enforcement staff on recruiting violations that occurred within the academy's football program during the COVID-19 dead period and the appropriate penalties for those violations
October 3, 2022

The 2004 case of Bloom versus National Collegiate Athletic Association put the spotlight on a student-athlete who juggled multiple sports between the collegiate and professional levels.
September 30, 2022

Texas Tech was fined $50,000 and reprimanded by the Big 12 Conference after football fans stormed the field following an overtime win over rival Texas.
September 27, 2022

Those at the center of college football's neutral-site bowl structure want an expanded College Football Playoff to still be about bowls and bowl sites.
September 26, 2022
Page 1 of 40
Next Page
AB Show 2022 in Orlando
AB Show is a solution-focused event for athletics, fitness, recreation and military professionals.
Learn More
Buyer's Guide
Information on more than 3,000 companies, sorted by category. Listings are updated daily.
Learn More